Sports Q&A: Will Over Skill 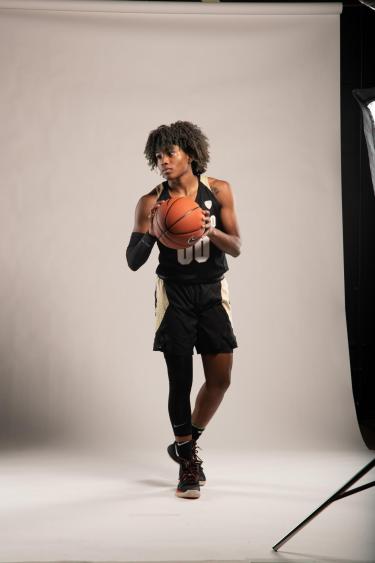 Sophomore Jaylyn Sherrod (Soc’23) is CU women’s basketball’s first–ever player from Alabama. Named CU’s Most Improved player and selected for the Pac-12 All-Freshman Team, the 5'7" Birmingham native reflects on leading as a point guard, choosing the Buffs and communicating on and off the court.

You became the Buffs’ starting point guard after six games last year. What was it like directing the offense as a first-year player?

It was tough having to learn so much. But at the same time, it was an experience that I needed, and it helped me grow as a player and as a person more than anything.

What were the biggest takeaways from your first year?

Learning how to lead, be more vocal and communicate with my teammates and coaches to get us all on the same page. We all have different personalities. It was figuring out how to get the best out of each person on the team.

How did offseason training go for you?

When I got home, I worked out with my trainer. I met him when I was in ninth grade. I went to Florida with him a couple of times and worked with [Saints quarterback] Jameis Winston. With the [CU] team, it was Zoom. We did a lot of calls, a lot of film sessions, trying to find ways to learn, even though we couldn’t be training in person.

Did you ever play basketball with Jameis?

We did play. It was me and a couple of my old teammates and a couple of guys who we worked out with. There’s video out there. If you lost, you had to run. We won, so that was good.

What’s something you make sure to do when you’re in Birmingham?

I eat at places that I don’t get the chance to eat at up here. A place called Granny’s, a food truck. They do shrimp and grits, and it’s really, really good. There’s a line down the street.

You’re the first player in program history from Alabama. Why did you choose CU?

Because they were really invested. They showed the most interest in getting to know me and not just me, but also my family and the people around me. I'm not a fan of the snow, but I love the people. I love the atmosphere. I love the energy.

Can you share something you’ve learned from Coach JR Payne?

I told Coach, ‘I don’t know how you do it.’ It seems so stressful to be a second mom to 16 girls on the team and have her own children. It’s the mental toughness of all the coaches really, because they have their own lives and families, too.

Why did you change your number from 1to00overthe offseason?

In high school, I did the same thing. I really grew asaleaderandasa communicator on my high school team. And I saw myself doing that as a sophomore here. I thought: why not remind myself what I went through and how I came up out of it?

Junior Lesila Finau (Psych’22) began last season as the starting point guard. This season, you’re both starters in the same backcourt. How does that work? 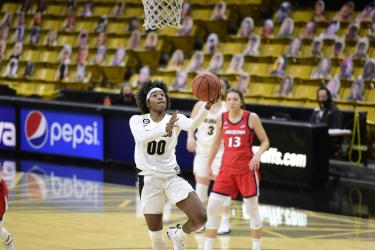 It has made it a lot easier for our offense because it puts in another ball handler. You have basically two point guards out on the floor. Sila brings a lot to this team.

How do you stay in control?

That’s what I bring to the table. My job is to bring energy and just do what I do because I'm not 6'4." I’ve gotten a lot better at how to change speeds at times.

You’re known to say, “It’s will over skill.” What motivates you?

My will is what got me here, the intangibles. I don’t need to score 30 points. I don't need to have a great three-point percentage. Honestly, so many people now get lost in having more skill instead of that fight, that toughness and that grit.

What’s one thing Buffs fans would be surprised to learn about you?

I am a nerd. I like Greek mythology and Shakespeare. I have a tattoo from Shakespeare on me. When I have free time, I’m normally reading a book. It’s crazy because I really do not like school.