Former CU decathlete Eddie Taylor (BioChem, Math’12) admits he never expected to stand on the summit of Mount Everest — especially as part of the first all-Black team to attempt the expedition.

Organized by veteran alpinist Phil Henderson of Cortez, Colorado, Taylor summited the tallest mountain on Earth in May 2022 alongside seven other athletes and 12 Sherpa guides on a team called the Full Circle Expedition. Under the mentorship of Henderson, the team’s accomplishment nearly doubled the number of Black climbers to summit Everest. Previously, less than 10 Black climbers had reached the summit out of thousands of others.

As someone who didn’t have climbing mentors he could relate to, Henderson — the first Black American instructor at NOLS [National Outdoor Leadership School] — said of the feat: “It came full circle.” 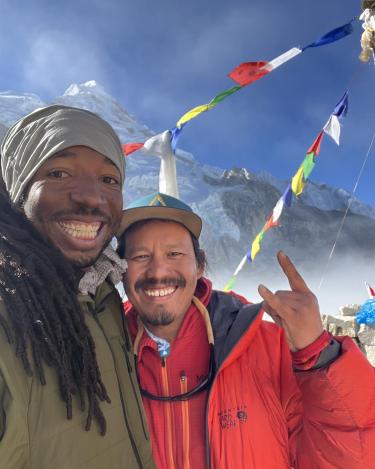 Taylor grew up in the Midwest, where he enjoyed running track while getting his mountain fix on family trips to northern New Mexico and various national parks. When it came time to choose a university, the appeal of the well-known track and field team, innovative community and beautiful Colorado weather was a no-brainer: CU Boulder was the perfect fit. Taylor double-majored in math and biochemistry, all while competing in the decathlon.

“The Buffs are a legendary sports team,” Taylor said. “I was a walk-on, and the opportunity was amazing.”

Taylor’s experience reinforced what it meant to train hard and find success in chosen objectives. After graduating from CU, a friend invited Taylor to go rock climbing, and a light switched: “I went all in,” he said. Taylor became a strong, competent climber and mountaineer, and where he once had track goals, he was now setting goals in the mountains.

In early 2021, Taylor met Henderson at a dog park in Ouray, Colorado, when both were in town to ice climb. The two sparked a conversation and saw each other around the town’s infamous ice climbing park. Henderson took notice of Taylor’s impressive climbing ability and mountain sense. When Henderson began finalizing his Full Circle team in 2021, he invited Taylor to join.

Spearheaded by Henderson, Taylor and the rest of the team — Moanoah Ainuu, Fred Campbell, Abby Dione, KG Kagambi, Thomas Moore, Dom Mullins and Rosemary Saal — raised over $800,000 for the expedition as they began their training.

To train, Taylor stayed true to his weekly routine: climbing outside three to four days a week, coaching track at Centaurus High School in Lafayette, Colorado, and getting out to Rocky Mountain National Park to climb or ski on the weekends.

The team traveled to Nepal in March 2022, embarking on a 70-day expedition up the southwest ridge of Everest. After hiking 25 miles to Everest’s base camp (17,400 feet), Taylor and the Full Circle team spent a few days acclimating and preparing for the ascent. Henderson, who did not attempt the summit, remained at base camp.

From base camp, the team spent many rotations successively climbing higher to acclimatize to high altitude, eventually making it to Camp 3 at more than 22,000 feet. On May 12, the team staggered hiking times and pushed for the summit at their own pace.

Where he once had track goals, he was now setting goals in the mountains.

During a good weather window, Taylor stumbled out of his tent around 9 p.m., wearing an oxygen mask, down suit and pack. He saw a line of headlamps heading up the mountain and “put one foot in front of the other and started plodding toward the trail,” he said.

“Soon enough, I caught up to the traffic,” he said. “I was cold, so I did what I knew how to do best; I unclipped and started passing folks.”

At midnight, Taylor and Pasang Ngima Sherpa were among the first at a resting place known as the Balcony. At 2:40 a.m. Taylor and Pasang stepped onto the highest point on Earth. The summit of Everest was dark, short and sweet. Taylor snapped a blurry photo and quickly turned back to begin a safe descent and eat a hot meal.

“The summit didn’t mean that much to me, but what the expedition means is very important,” said Taylor.

The seven other Full Circle team members also summited on May 12, officially reshaping the future of mountaineering. The team’s accomplishment was featured in USA Today, Outside magazine, National Geographic, CNN and more.

“Our goal here is to help folks aspire to have a profound and respectful relationship with the outdoors and feel not entitled to it, but welcome to it. If you see it can be done, you can do it right,” said Full Circle team member, Abby Dione, in a CNN interview. 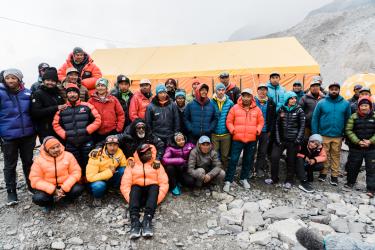 As it did for Henderson, the experience has come full circle for Taylor.

Just as Taylor prepared for Everest is how he returns from Everest — continuing his daily routine. Taylor continues teaching at Centaurus and coaching track after school. He travels to the mountains in his free time and plans to climb in Yosemite National Park next season.

“I just love giving back, taking my knowledge and giving it to the kids in the up-and-coming community,” Taylor said.

Fifty years ago, Tom Hornbein made history by being part of the team that put the first American on top of Everest. END_OF_DOCUMENT_TOKEN_TO_BE_REPLACED 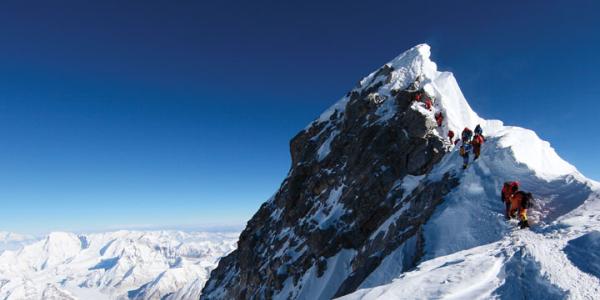 Mountaineer Neal Beidleman survived the 1996 Mount Everest tragedy that left eight climbers dead. Upon his return this year he found some peace. END_OF_DOCUMENT_TOKEN_TO_BE_REPLACED 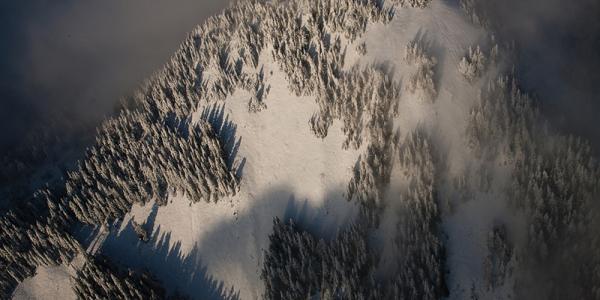 John Branch wins the Pulitzer Prize for his captivating and tragic story about an avalanche that swept over a group of expert skiers in Washington’s backcountry. END_OF_DOCUMENT_TOKEN_TO_BE_REPLACED