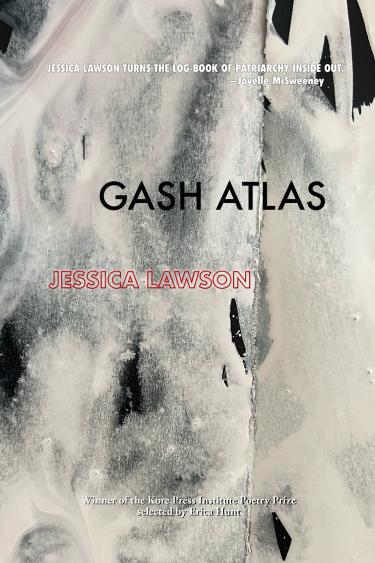 Award-winning Denver poet Jessica Lawson’s first full-length collection, Gash Atlas, portrays the nightmarish cartography of life in and beyond the Trump era. Through poetic and visual “maps,” this new work, selected by Erica Hunt for first place in Kore Press Institute’s Poetry Prize, surveys the cultural present while folding back nested histories of personal and cultural violence. Emerging from this horrific landscape is the character of Christopher Columbus, a simultaneously historical and surreal figure of colonial and sexual terror who has become omnipresent, infiltrating multiple institutions including the White House, the police, the TSA, the university, and the family home itself. As the book’s speaker, a young white mother, works to resist her own complicated entanglement with Columbus, she becomes increasingly aware of her complicity in the violence he performs. A terrifying catalog of cultural wrongs leads to an intimate examination of the speaker’s relationship with her Black family. Lawson remarks “there’s no way to make an uncomplicated step in a conversation with white supremacy, colonialism and the histories that they invoke.” Combining the visceral images of Sarah Kane and the formal play of Douglas Kearney, Gash Atlas pushes the boundaries of poetry and politics in a voice that is at once raw, urgent, and poignantly human.