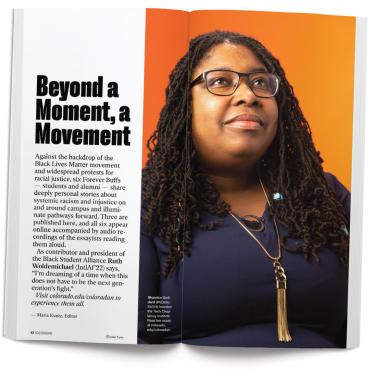 What a phenomenally powerful piece! As a multi-generation CU Buff, these essays will open up some important conversations with my family.

I grew up in Boulder in the 1940s and 50s, living in the rooming and boarding house my mother ran for college students on the Hill. The Coloradan always brings back powerful memories. The Fall 2020 issue with its emphasis on racism was particularly meaningful given my subsequent involvement with the civil rights movement. During vacations with the CU dorms closed, my mother would feed those (mainly international) students who were not able to return home, with a special meal at Thanksgiving. I got an amazing education eating with them.

Thanks for the feature on Richard Wobbekind. I first met Rich in the late 1980s when I began my career in local and regional economic development. We’ve been collaborators ever since and now are friends, too. Much of what I know about the Boulder and Colorado economies I learned from him. “First and foremost an educator,” indeed!

I take issue with the “Fake News” article in the recent Coloradan. There have been recent congressional hearings on the unmitigated power of organizations such as Facebook, Google and Twitter. Interestingly, CU professors Hopp and Ferrucci write that Facebook now removes news it deems inaccurate and sends out warnings to those who have liked or shared it. The question I would ask — who is to judge our freedom of speech? Short of obscene content, I would say it is entirely up to the reader to decide, not journalists, professors or tech giants.

The issue of misleading the public through incorrect information or deliberate disinformation cannot be overemphasized. Tiny, local events can be magnified and dispersed as “national news” via a simple post on the internet. Fabricated posts — designed to distort facts and inflame human emotions — are used to distort our values as a nation and incite distrust and hostility among our citizens. The “Fake News” article in the fall issue of the Coloradan only touches the surface of this clear and present danger to our democracy. I suggest developing a focus group — made up of individuals at CU in collaboration with other institutions in the state — to develop a concerted effort and strategies to help turn this around. It’s not enough to just sit back and think or write about it. Our “best and the brightest” need to start changing how we deal with this attack on our information systems, with intent to disrupt, manipulate and tear apart our society.

I wanted to respond to the article titled “Fake News.” Unfortunately, this article misses the point. No doubt there are many fake stories of the kind the author points out — I do not question those. But what the author, and most likely the university, fails to recognize is that most mainstream media has gradually become fake — meaning they only espouse and endlessly push one left-leaning ideology.

When I was a journalism student at CU in the early 90s, we discussed concerns about concentration of ownership, but nothing was done about it. And here we are, where one idea — progressivism, globalism, name your ism — is all the media will show. I hope universities, the news, social media and tech companies start re-embracing a respect for the free exchange of ideas that the First Amendment protects, then start rejecting the concept of “safe spaces” where no one can even consider ideas to wrangle the best ones. 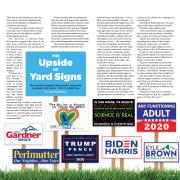 With CU being a forerunner on environmentalism, I would have hoped that the “Yard Signs” article would have noted the massive downside of all those signs. So. Many. Signs. Welcome to preschool, every team ever played on, every birthday, graduation, political signs... Here’s a movement: Stop putting out so many signs, and spare our earth all the vast dumping of signs in landfills — not to mention the mining, energy production and most likely toxic paints and dyes that go into making them. 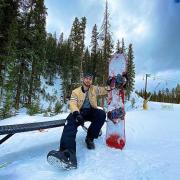 'Tis the Season for Buffs Pride 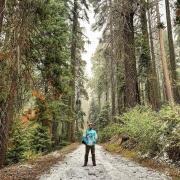 A Buffs Fan in the Wild 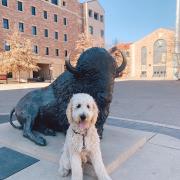