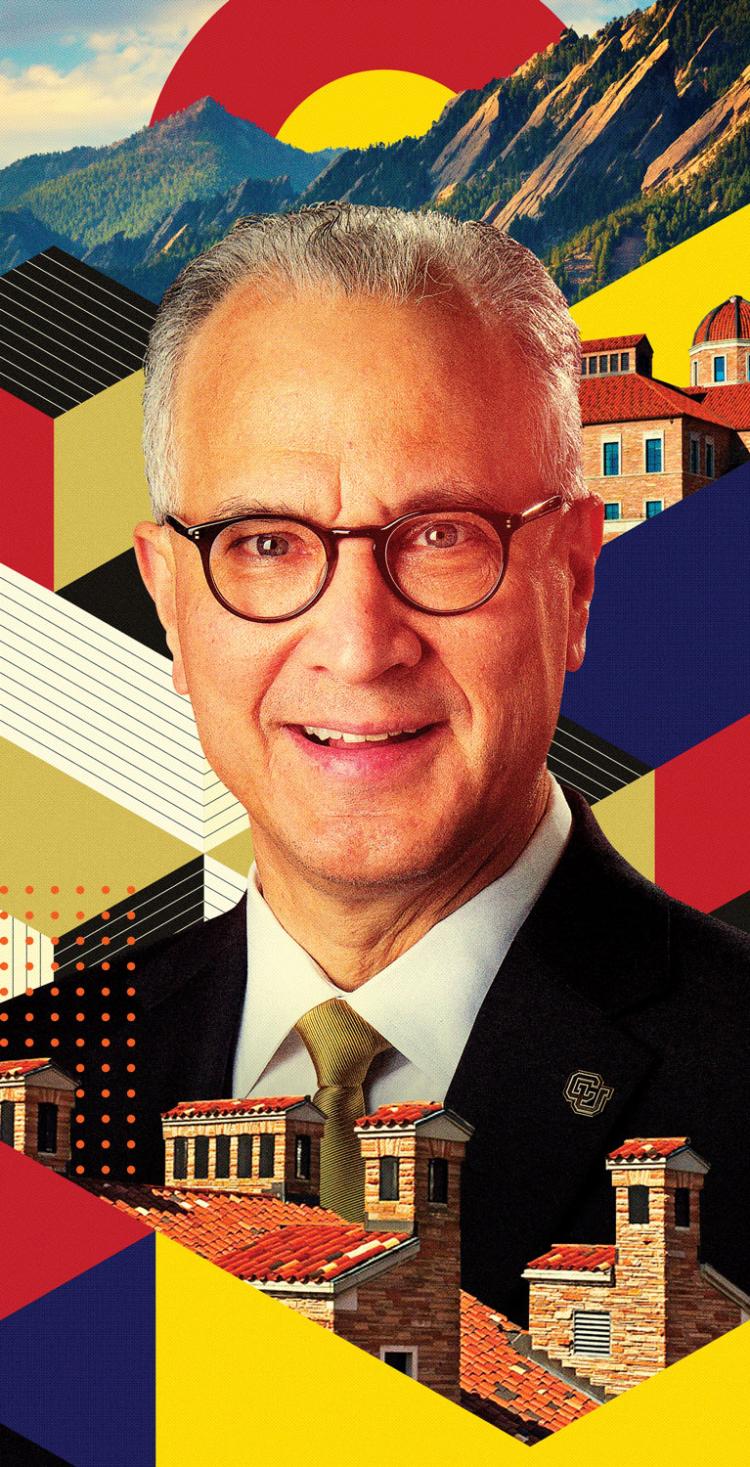 Early bird or night owl?
Early bird. During my high school years, I worked during the summers in a small-town bakery starting at 1 a.m. When we had the dough prepared, the loaves cut up and in the steam box, we waited for the dough to rise before loading the oven and then frying the donuts. We would often take a short break, sitting on the bench in front of the bakery along main street. There is something about the stillness of the early morning that is captivating to me. Since then, I have always found it valuable to get an early jump on things to prepare for the day’s activities.

Coffee or tea?
Coffee. Having been born caffeinated, I did not start drinking coffee until later in life. I now find it indispensable to the start of every day. As the early riser, I am normally the one who makes the coffee for my family, though I have never been able to make it strong enough for my younger daughter.

Favorite ice cream flavor?
Having been part of the acquisition team at Pillsbury that purchased a small ice cream company and then helped to spread it around the world, my favorite ice cream brand is that company — Häagen-Dazs. My favorite flavor is rum raisin.

Book you can’t forget?
I am haunted by Kai Fu Lee’s AI Superpowers. Lee is perhaps overly optimistic about both the advance of technology and China. Even after discounting for these biases, I am left with grave concerns that the United States is not taking the actions necessary to preserve our innovative edge and that losing that edge will have profoundly negative consequences for our prosperity and security. This leaves me even more motivated to work hard to ensure America has the talent and the discovery necessary to keep our technological lead. While neither begrudging China’s rightful rise nor claiming that America’s actions are above reproach, I remain convinced that the leadership of a strong United States has historically been vital to not only our nation, but the world.

How would you describe yourself in one word?
360°. I have always striven to gain an ever-broader view. I see life as filling in a million-piece puzzle. Each new encounter offers an opportunity to add another puzzle piece. Serving at the lowest and highest rungs in business, public service and academia, regularly engaging academic, business, civic, government and military leaders in over 40 countries over the last three decades, visiting refugee camps and war zones, living in the smallest and largest of cities, in America and Europe, beginning each day for the last two decades by reading the Wall Street Journal, New York Times, Washington Post and the Economist, and being an active reader has helped me see the big picture a bit more clearly. Still, I am always anxious to add even more context by learning from others and adding their perspectives.

Is there a “Colorado thing” you’re still getting used to?
The one “Colorado thing” I may never get use to is driving along the edge of cliffs with no guard rails. I am thankful that when riding the Red Mountain Pass last month we drove south so we hugged the mountain, not the cliff.

We hear you grew up in a small town. Where, how small and do you have a favorite memory of it?
I began life in Murdock, Minn., with a population of less than 300 and at age 4 moved to Pequot Lakes, Minn., with a population of around 450. The best thing about living in a small town and graduating from the local public-school with 55 classmates is that you get an early start in developing your 360° view.

I began working at age 14 picking strawberries, washing dishes at a bakery and pumping gas at a bait shop. I was in band, choir, class plays, student government, Boy Scouts and played in the Brainerd Area Jazz Ensemble. I lettered in basketball, track and field and as the manager for the football team, setting a school record in the mile run. In 4-H, I won trips to the state fair with my beef, electric and photography exhibits and with demonstrations in automotive and gardening. My wife and I met as state 4-H ambassadors. It is hard to match the breadth of experiences available growing up in a small town.

You served in the U.S. Congress. What do you miss, what don’t you miss?
It was an honor to serve our nation in the United States Congress. I miss being in the midst of the debate on the most serious issues facing our nation. I enjoy raising money and advocating for policies I believe are important, both of which I do in my current role as President of CU. Even more so today than when I served, the fragmentation of media and society results in extreme positions on each side of nearly any topic attracting passionate followers. I don’t miss purely partisan groups poised to attack every time you reject the extremes and push instead for sensible solutions that represent a compromise for both sides.

What about you tends to surprise people?
Those who travel by car with me are surprised that I regularly sing during the journey, normally beginning with “I am just a plain old country boy…” My oldest son suggests people are surprised that my varied background allows me to identify a shared experience with nearly everyone I meet.

If you could go to college all over again, what would you do differently?
I am pleased that the liberal arts core of my college degree allowed me to gain exposure to so many fields of study in the fine arts, humanities and social sciences. What I would have done differently would be to focus a little less on extracurricular activities and consider taking a full four years in order to focus a lot more on striving for As. As a first-generation college graduate, I had no one to coach me that I may want to attend graduate school and that my grades would determine the options available to me.

My undergraduate activities included work-study, dishwashing in the cafeteria and shelving books in the library, doing bookkeeping for the local parish, serving as a statewide 4-H ambassador my freshman year, touring the region with the men’s chorus, playing in the pep band, organizing an undefeated co-ed volleyball team, being the captain of an intramural basketball team and serving as an elected member of the student senate, all while completing my degree in 3.5 years. This left less time for intense study.

My acceptance to the Michigan MBA program provided a second chance. I took off either Friday or Saturday evening, never both, and graduated with distinction.

What do you think CU should do more of and less of?
The velocity, scale and breadth of the transformation the Fourth Industrial Revolution is unleashing has no historical precedent as it unfolds at exponential speed, outpacing the ability of many individuals and organizations to adapt. Experts predict it could automate nearly half of today’s jobs, forcing many to change careers.

With most of today’s students likely to work during their lifetime in jobs not yet invented, it is ever more important that CU cultivates students’ critical thinking, teamworking skills and cultural awareness by getting students to wrestle with difficult questions and fostering an environment of inquiry and debate.

We should seek every opportunity to embrace adaptive learning technologies that supplement classroom dialogue led by knowledgeable professors with digital offerings that know what learners already understand, what they struggle with, how they respond to different teaching methods, what incentives drive them to excel. Today’s digital natives will increasingly rebel against being forced to learn at the same speed, in the same way, at the same place, and at the same time. The embrace of augmented and virtual reality can also enrich the educational experience.

A deliberate focus on rapid testing cycles for new teaching methods and credentials holds the promise of setting CU apart from its peers.

As a nation, we need to redouble our federal government, corporate, academic commitment to research to keep America’s innovative edge. CU is important in this effort as the nation’s seventh largest public university system in research.

With students increasingly benefiting from hybrid programs of study that draw from several disciplines to be best prepared for tomorrow’s fluid nature of work, we must seek to eliminate excess hoops that students are called to jump through that are more focused on routing credit hours to a particular academic department than to optimizing student success.

What do you want to be remembered for?
As a first-generation college graduate who is deeply appreciative for the opportunities a college degree unlocked from me, I seek to support efforts to attract an increasingly diverse student body to CU, including those who did not believe a college degree was in their future, and to do an exceptional job of supporting them through graduation.

As someone who is convinced that university research is central to tackling today’s grand challenges and to powering the innovative edge that keeps America prosperous and secure, I am committed to advancing CU’s research mission in collaboration with our federal and corporate partners.

Only by taking trailblazing, future-focused steps has CU risen to prominence. CU Boulder’s research excellent has sprung from seeing future opportunities before others did, establishing LASP in 1948, a decade before NASA, CIRES in 1967, the first and now the largest NOAA cooperative institute and more recently BioFrontiers to drive interdisciplinary innovation. CU Boulder started an extension center in Denver in 1912 and started teaching in Colorado Springs in 1945, eventually birthing two new universities serving these important Colorado communities. CU established a medical school in 1883, absorbed DU’s in 1910 and took over Fitzsimons Army Medical Center to become the beating heart of the leading medical center in the region. Where would CU be today without having taken these pathbreaking steps?

What I hope to be remembered for is as a President who called CU to stay true to its heritage of taking bold innovative steps into the future, challenging it to not be trapped by rigid historical constraints, but instead to uncover landmark discoveries and to embrace technology with an unrelenting focus on the interests of learners, both traditional and nontraditional, to enhance the quality of a CU education, to make it more broadly accessible and to keep it affordable.