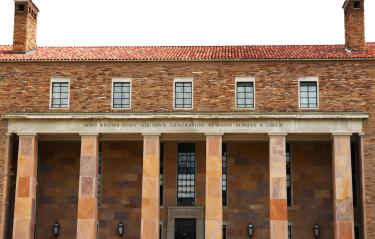 WHO, NOT HE
Sorry to send in a correction to a correction — i.e., to a letter to the editor suggesting you had forgotten something. But I can’t help myself, because we had this pounded into our heads when I was at CU (as the son of staff members, as a student and later as a staff member myself). The inscription over the colonnade at Norlin Library reads: "Who knows only his own generation remains always a child." It does not stat with..."he." A lot of people think it should, but the fact is that "he" and "who" are both pronouns and it's not necessary to use both.

COLORADAN OR COLORADOAN?
As a native Denverite (living as a Seattleite) and alumna of CU Boulder, I’ve always referred to myself as a Coloradan [“Origins,” Spring 2019]. I know of zero natives (and yeah, of course we count the most) who refer to themselves as Coloradoans. That’s just weird...

SORORITIES
Looking at your “Homes on the Hill” article [LOOK, Spring 2019] brought back fond memories of my CU sorority life. It was great to see my sorority, Delta Gamma, among the doors. Oddly, that really isn’t the front door, but the true front door was rarely used. Delta Gammas had many great parties and sun bathing afternoons on that patio. It also was a peaceful place to read. Thanks for these memories.

ALUMNI OF NOTE
For many years I’ve wondered why so many stories have been devoted to individuals who haven’t actually graduated from CU Boulder. Maybe one and done would be reasonable for exceptional dropouts, but celebrity status within our culture should not be the sole criteria to share the pages with CU’s finest. The Coloradan might consider acquainting readers with David Packard, Sidney Altman, Ellen Johnson Sirleaf, Linda Chavez and Kevin Corke. These exceptional individuals actually graduated and should qualify for more than one story.

VARIETY AND WARMTH
Your Coloradan publication is superb. In a relatively tiny span, it’s loaded with variety, warmth, diversity, humor, and smarts. So, so proud to be a Buff every time I read it. Thanks for the continued classiness.

NORDIC STUDIES
Thanks for a very good Spring 2019 issue of the Coloradan. The short piece on Nordic Studies program director Jackson Crawford [Inquiry column] was particularly interesting, and led me to an online treasure hunt to his many YouTube videos. I also purchased copies of his two recent translations of the “Poetic Edda” and “Volsung Saga.”

NORM PACE
I knew Norman [“Blowing the Doors Off”, Spring 2019] in his teen years and was with him on his first cave trip into Wayne Cave in Monroe County, Indiana. He was a special person even then. Glad to hear that he is still going strong.

THOMAS RIHA
I just read the article titled “Where’s Thomas Riha?” [Boulder Beat column, Spring 2019] and enjoyed it. However, I was really disappointed when the article closed with Galya being “packed off to the state funny farm.” I am not sure if this was in reference to the timeframe in which Riha went missing, but when mental health issues are so common, especially on our campus, it does not seem to be a topic that should be downplayed in any way. Additionally, I think it is important to remove as much stigma from suicide as possible, and the word “committed” only heightens it — something like “died by suicide” conveys the same ending but with much less of a connotation. 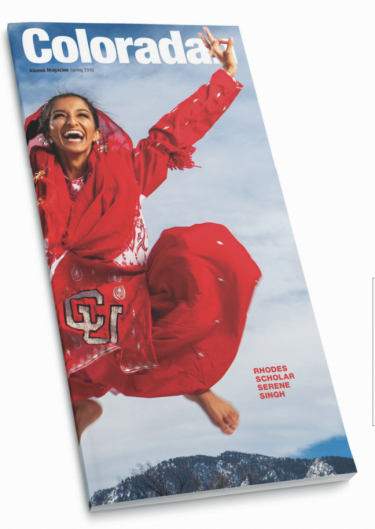 RHODES SCHOLAR
I felt joy, pride and hope in seeing the photos and reading the article about Serene Singh [Cover Story, Spring 2019]! The cover photo is a person filled with genuine joy and happiness. Ms. Singh’s story is one all young people, especially young women of color, can be proud of. And reading about Ms. Singh’s hard work, successes, and goal of becoming a Supreme Court Justice should make all of us hopeful that our country and the world will be in better hands as people like her become the leaders we need.

NEW CU PRESIDENT
It seems to have not mattered to the Republican Regents that Mark Kennedy is vastly underqualified to run an institution the size of the University of Colorado, nor that he is politically out of step with the majority of Colorado residents. They got exactly what they wanted, another conservative ideologue.

Editor’s Note: On May 2, the elected CU Board of Regents voted 5-4 to hire Mark Kennedy as CU’s next president. The five Republican members voted for him, the four Democrat members voted against.

PRIORITIES
Regarding the article “Tucker Takes Over Buffs Football” [Sports, Spring 2019], I couldn’t help reflecting on how in a different world Coach Tucker’s generous salary could be put to alternative uses in benefiting CU. Multiple tenured professorships, more respectable pay for countless adjunct professors, new lab equipment, scholarships, etc. The list is virtually endless. While I don’t begrudge any individual their right to maximize income in a market-based economy, it certainly highlights the skewed priorities our society has embraced for the allocation of scarce higher education resources.