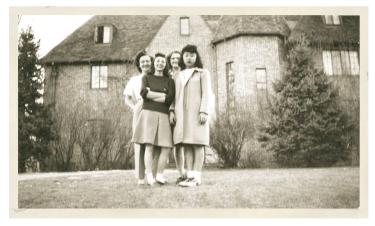 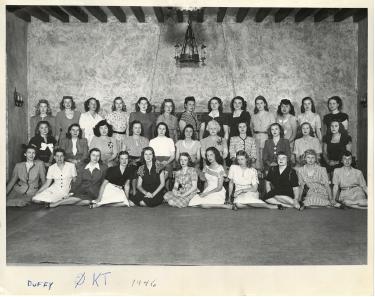 These photos were from Spring 1946! The women’s dorms were still occupied by sailors who were studying Chinese and Russian. Freshman and sophomore women were housed in the nearly empty frat houses.

This photo is the group at the ΦKT house. The former house mother, Mrs. Rose, remained. We gave “sock” dances, tea dances and had a softball team!

I keep in touch with only my roommate, Shirley Young Brennar (A&S’49) — I am far left, front row. 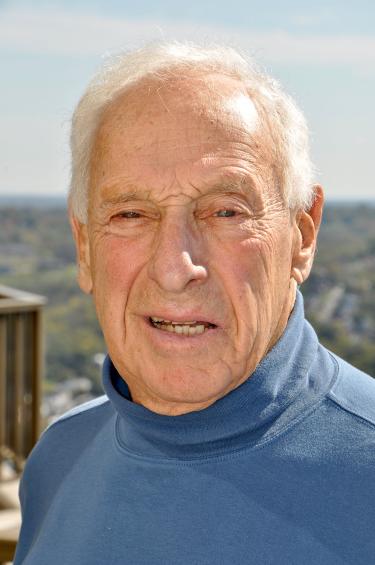 In May of 1946, I applied to CU as a freshman. That was just when thousands of service people were applying to college under the GI Bill. Having been turned down at CU, my dad called up the dean of admissions to beg re-consideration. The dean asked, “Are you possibly related to Simon Guggenheim?”

Father, in his expansive manner, stated that both families emigrated from Europe in the 1840s, and were undoubtedly “questionable cousins.” With that one conversation I was admitted for the summer semester and could stay on. ... If I did not flunk out.

Once on campus, I became quickly aware of Guggenheim Hall. I thought it would be a nice thing if this new Midwestern Guggenheim could add to Simon’s name and legacy. (Plus four children and one granddaughter would be added to the CU graduation mix.)

And thus, in 2017, our family endowed the Thomas Stix Guggenheim Chair at the CU School of Business: Design and innovation, with case studies on business failures.

More on the Pipe Organ

Pipe Organ” [Winter 2020], prompted a flood of memories about my unique experiences at the piano during a silent movie series in 1970–71, arranged by a student organization at the UMC. Reflecting the “nostalgia” craze of the early ’70s, the organization wanted live music for the screenings instead of the “music track” included on the film. As there was no pipe organ in the UMC, I played live piano, mainly improvisation, along with the movie. Unforgettable is the showing of the classic Nosferatu (Dracula), for which I borrowed a black cape from the drama/theater department at CU to wear. There was an audible gasp from the audience when I entered from the stage door and took my seat at the piano. There was a Russian silent and several Charlie Chapman delights, including Gold Rush, among others. As a doctoral student in piano, I was not expecting such an engagement, but the honorarium was most welcome in my academic pursuits.

I was appalled upon reading the Winter 2020 Coloradan’s “The Hardest Day.” It features Ross Taylor, CU Boulder assistant professor of journalism, who photographed and posted images of  dog custodians (whom I do not consider to be “owners”) upon the euthanization of their beloved\ pets. Taylor claims that his motives are sound and hopes that those people are comforted and not feel alone.

I don’t share that view. Instead, I see it merely as sensational journalism. I fully understand the purpose of having pets euthanized at home. Several years ago, I had a ver y sick family dog euthanized at home. I believe that this event needs to be private with grief shared among the human relatives of the dog. If individuals take comfort from viewing a series of photographs taken when their pet was experiencing its last breath, then I believe that those images would most appropriately be maintained by that individual. To post them on the Internet or make a documentary does not seem to advance the cause of in-home euthanization.

If providing comfort is the main issue, then I think that there are other avenues for pet custodians. For example, there is one hospice organization that is addressing loneliness associated with pet grief by providing regular sessions for persons who have terminally ill pets or pets who have recently died into their support groups. This is a private, positive approach for those individuals to share their innermost feelings of loss with others who have experienced the same. The results are fulfilling and personal. I think that this would be a better “teaching moment” for journalists to promote healing rather than having an “emotional splash” which could possibly result in receiving a Pulitzer Prize for feature photography.

The Joy of Writing 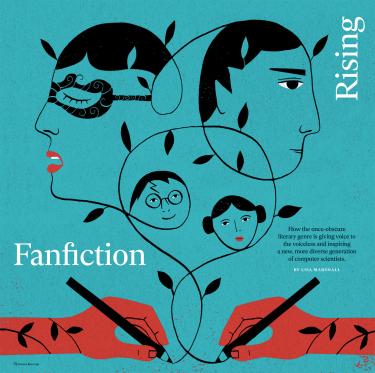 The article about fanfiction in the winter issue of the Coloradan brought back memories of an upper-level creative writing class I took during the 1962–63 school year. Even though I had little writing experience, I had been accepted into the class after submitting a story I had written to the instructors. The class was taught by the husband/ wife team of Mr. and Mrs. Alex Warner, and we met for three hours Wednesday evenings at Hellems. I was very surprised the first evening of class to learn that there were only three students present who had been accepted. They were  Hannah (Ann) Steuart (A&S’65) of New Jersey, Fred Smith (A&S’63) of Los Angeles and myself, from Pueblo, Colorado. Each week we were required to submit a short story which we would read to the class, then discuss. Although our backgrounds were very different, we three students became friends. We were somewhat dismayed during the spring semester when four more students joined us, disturbing our rapport.

This past Christmas, I gifted my two children and six grandchildren with a book I had printed just for them. The first part was my abbreviated autobiography. The second part consisted of 10 short stories I had written over the years, simply for the joy of writing. That joy was nurtured in that Hellems classroom all those years ago.

In the Winter 2020 LOOK article, we asked you to name your favorite meal on The Hill. Burgers from The Sink dominated the list.

Here are a few of your other responses:

“A big go-to then was Espresso Roma!”

“It was the Southern Sandwich at Taylor’s. Simple grilled chicken on sourdough bread topped with provolone, sliced avocado and buffalo wing sauce. Still the greatest culinary invention of all time!”

“Peanut butter cinnamon rolls for breakfast at Owens on the corner of 13th and College.”

“My Hill go-tos were Bova’s, Round the Corner, The Sink and Giuseppe’s!”