Home Spring 2019 Blowing the Doors Off the Microbial World 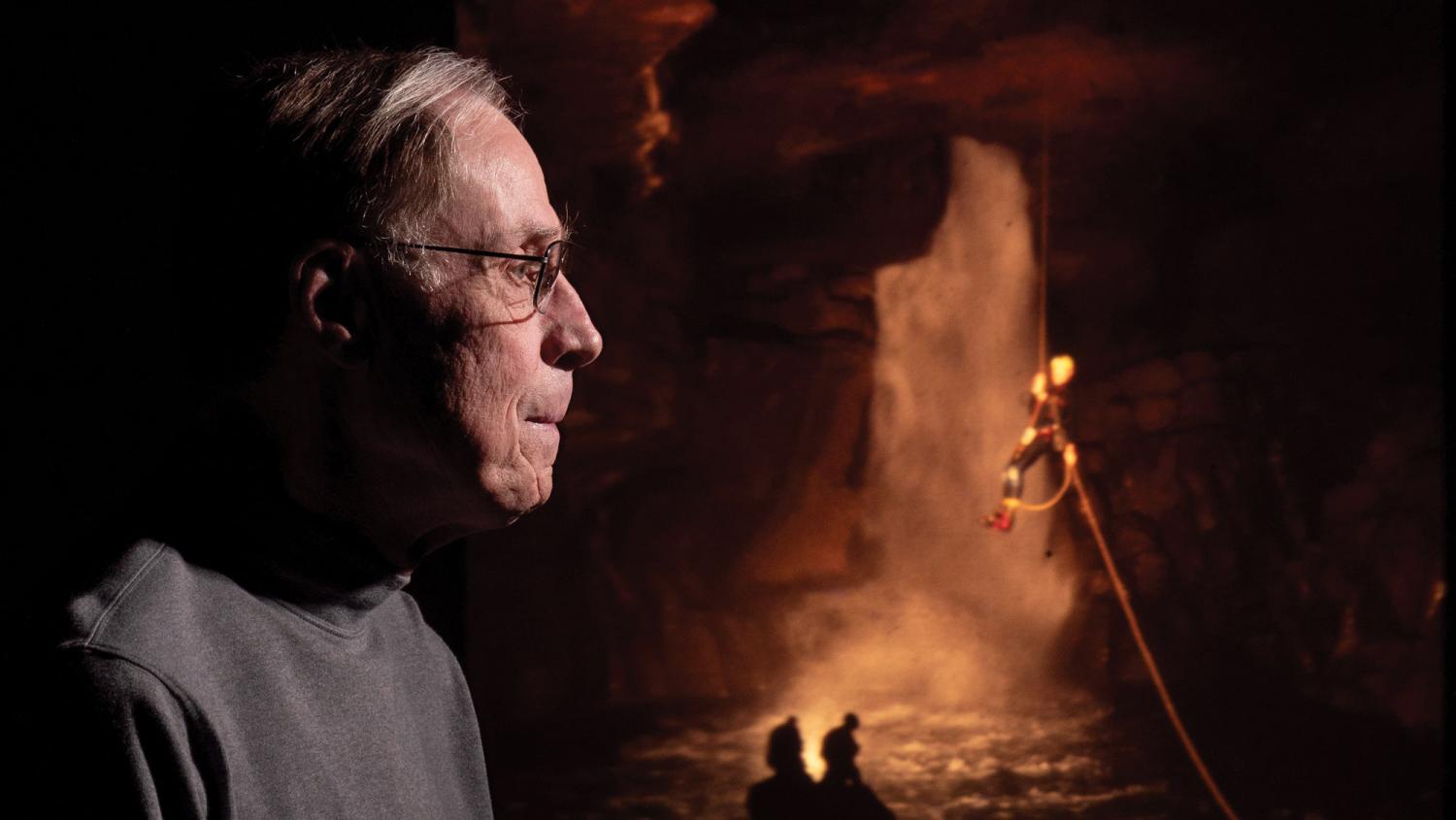 CU's Norm Pace isn't intimidated by the darkness of remote caves, or the vastness of the microbial universe. He's mastered both.

Norm Pace can still remember what it smelled like in that first cave.

The boy, a precocious 14-year-old who had talked his way into the local caving club’s expedition to the newly discovered Monroe Cave.

After ducking through a hidden entrance, climbing down 20 feet and slithering on his belly for a quarter-mile, young Pace stood up to behold a room full of 40-foot rock formations coated in a white crystalline substance known as “moon milk.”

“It smelled wet, mucky and alien in there,” said Pace, now a CU distinguished professor emeritus of molecular, cellular and developmental biology. “It was clear that this was not a world like the one I was used to.”

Pace has since discovered and mapped some of the largest and most dangerous caves on the planet, a hobby that has required him to traverse deep underground lakes in a wetsuit and scuba gear, rappel down waterfalls and narrowly escape death.

Among cavers, he is a legend.

But he is best known for his exploration of a different once-alien terrain: The world of microbes.

A recent National Academy of Science honoree for his “pioneering work on methods for delineating the diversity of life on Earth,” Pace is credited with developing gene sequencing tools that have made it possible to identify virtually all microorganisms, wherever they live — remote caves, ocean floors, inside our own bodies. The current boom in microbiome research (the study of the myriad bugs living in, on and around us) wouldn’t have been possible without him, colleagues say. And thanks in part to his work, the microbial “tree of life” as we know it is rapidly filling in.

“Microbiology is going through a Golden Age right now, and it is largely because of Norm,” said Hazel Barton, a University of Akron scientist who once worked in Pace’s lab. “He revolutionized the field.”

A Renaissance in Science

When I meet Pace at his CU office, he greets me with a cold fist bump. He bumps fists with everyone: After decades of studying microorganisms, he knows too well what’s on people’s fingers. His fist is cold. Though it’s November and already dark, he rode his bike to meet me.

At age 76, he has started riding again, not long after surgery to remove several brain tumors and starting a new immunotherapy for Stage 4 melanoma.

He is in clinical remission. He thanks science.

“There is an incredible renaissance occurring in science right now,” he said. “The fact that I am even sitting here talking to you right now is evidence of that.”

Another scientific renaissance was underway during Pace’s rural Indiana childhood.

After his parents bought him a microscope kit, he spent hours poring over the strange rods and spheres. At 15, after building his own chemistry lab, he ruptured his ear drum and shattered the surrounding bones in a mishap with a batch of silver fulminate.

The only way to study microorganisms was to grow them in petri dishes. Pace would find a better way.

Pace’s formal entrée into science came in 1957, after the Soviet Union launched the Sputnik satellite. The U.S. government took note of the competition and launched two-week camps to engage kids in science. Pace was brought to Indiana University, where he met a molecular biologist. He was hooked.

“We didn’t know a whole lot about the natural microbial world,” he said.

Insects dominated textbooks then. Microorganisms appeared only in the contexts of “disease and rot,” he said. And the only way a scientist could study a microorganism was to grow it in a petri dish and observe its physical traits under a microscope.

This was problematic, because only a miniscule fraction of microbes will actually survive in a lab.

Pace would find a better way.

Filling in the Tree of Life

He attended Indiana University and the University of Illinois before ultimately making his way to CU in 1999.

For years he studied ribosomal RNA, the molecules that form the protein-making machinery of cells. His friend Carl Woese taught him that by comparing rRNA between organisms, one could infer a lot about how they evolved and the relationship between them.

Pace ran with the idea:

What if, rather than trying to grow a patch of some unknown microorganism in a lab to study it, you just sucked a bit of RNA from it in its environment, sequenced the genes, and compared them to those of other known organisms already plotted on the tree of life?

It was all about measuring the difference, or distance, between things, he said — kind of like mapping a cave. Pace first tried it with some mysterious pink filaments he and students scooped from a bubbling cauldron in Yellowstone National Park.

The resulting paper, published in 1984 in Science, made history, marking the first time anyone identified an organism by sequencing its genes.

Biologists now had a way to study microbes that wouldn’t grow in labs.

“We went from not recognizing 99.9 percent of the microbes out there to having the ability to identify everything,” said Akron’s Barton.

Since then, Pace has used genetic sequencing to discover communities of bacteria from the New York City subway, household showerheads and inside the intestines of a Russian surgeonfish (where he discovered the world’s largest bacterium, Epulopiscium fishelsoni).

In the mid 1980s, all known bacteria fit into about a dozen groups, or phyla. Today, there are about 150. Entire conferences are dedicated to the microbes living in our gut.

How many species are there?

“How many stars are in the sky?” said Pace. “It’s one of those wonderful unknowables.”

The same could be said for the world’s caves, which, thanks to Pace’s hobby, we also understand better now.

Because GPS is hard to use underground, mapping a cave requires old-fashioned exploration: “You have to physically move through it and measure angles and distances,” said Barton, a fellow caver.

For Pace, this has made for great adventures. 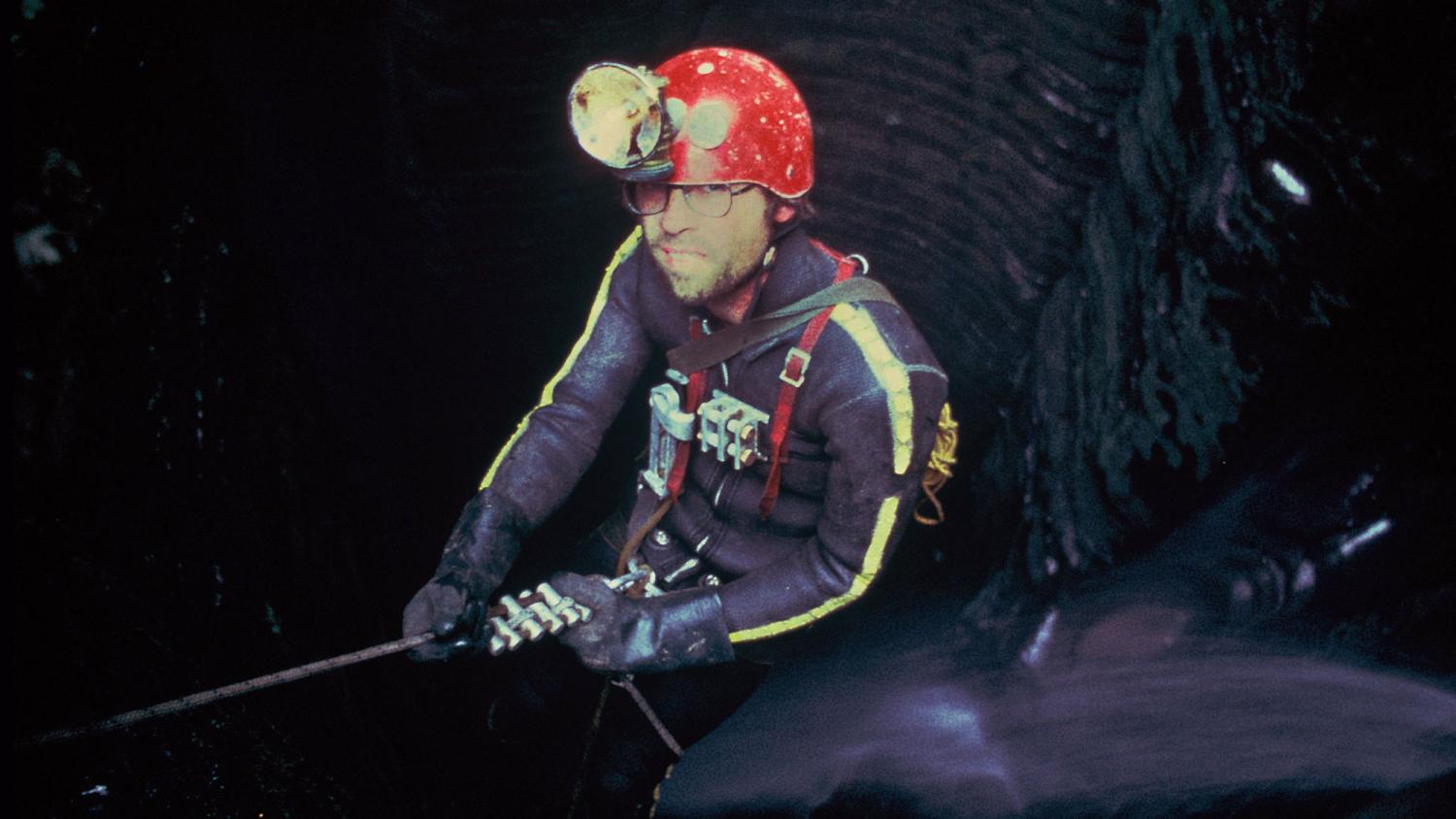 At Colorado’s Spring Cave, he had to don full scuba gear, wear it as he scaled a waterfall, then drop into an underground river and swim, the water lit only with a headlamp, for 300 feet.

In a cave near Grenoble, France, he broke ribs when his backpack slipped, smashing him against a rock wall.

During one harrowing expedition through a Mexican cave, he was making his way down a wall near a frigid waterfall when the clip holding his rope popped open, hurtling him downward into the torrent until the rope caught him 30 feet below. He dangled upside down for minutes, cold water rushing over his head, before freeing himself. His fellow cavers thought he was dead.

“I actually went through the mental process of dying,” said Pace, who led his last cave expedition in 2016. “That was interesting.”

Mortality called again in 2017, when he had a seizure while preparing for a lecture. “When I heard Stage 4 melanoma, I figured, ‘F#$@, I’m outta here’” he said.

But after 18 months on the immunotherapy drug Keytruda, he’s reinventing himself.

He recently remarried his former wife, Bernadette, a professional trapeze artist, he’s on the lecture circuit, and though he’s closed his lab, he teaches occasionally.

His protégés describe him as intimidatingly smart, at times cantankerous and extraordinarily generous.

“I am where I am today because of him,” said Colorado School of Mines professor John Spear.

He’s humbled, but not holding his breath.

After he’s gone, he has just one wish:

“I want to be remembered as the guy who blew the door off the microbial world.”

Teenagers and young adults think and act differently from grownups. CU scientist Marie Banich is helping us see why. END_OF_DOCUMENT_TOKEN_TO_BE_REPLACED

Amy Cuddy's TED Talk is the second most viewed of all time — and just a taste of what she has to say. END_OF_DOCUMENT_TOKEN_TO_BE_REPLACED