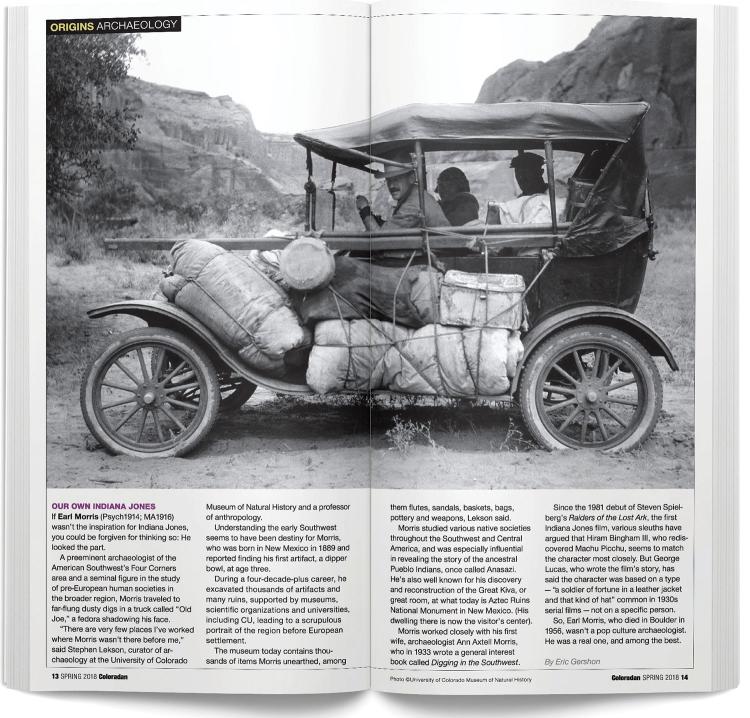 I was very pleased to see the article on Earl Morris in the spring 2018 edition of the Coloradan [pp. 13-14]. He was a superb scholar and superb human being. I attended the same schools at the same time as did his daughters Sarah and Elizabeth. Their mother, Ann Axtell Morris, wrote another very interesting and well-received book called Digging in Yucatan. After she died, Earl married Lucille Bowman — the principal of Highland School, my first-grade teacher and life-long friend. They continued to live and entertain in his charming artifact-filled home in Boulder’s Geneva Park until his death from a stroke in 1956. Many thanks for the article!

Earl Morris (Psych1914; MA1916) was a great American archaeologist who inspired a generation and more of Southwesterners to get out there to see the remains of prehistory, breathe it in, and then study, research and pass it on [“Our Own Indiana Jones,” pp. 13-14]. I was one of them, and especially lucky to be set in motion by an experience at CU with Earl Morris himself.

In 1952 I was an untraveled sophomore with a science scholarship, but not a clue as to what field to use it in. My boyfriend, however, had already visited Mesa Verde and Canyon de Chelly, and was excited to discover that their excavator, Morris, was teaching a rare class. He jumped to take it.

At a time when professors were generally more formal and detached, Morris invited his class to come to his home on The Hill for a look at his tools and collections (which later formed important holdings at the CU Museum of Natural History). I went, too, and listened and looked as the great man showed us ancient woven sandals, pots containing small desiccated corncobs and field notebooks. With evident enjoyment, he told stories and discussed meanings of each piece and answered our questions. In that two hours I became truly caught in the spell and the content of Southwestern archaeology!

I majored in anthropology, published on Mesa Verde archaeology, specialized in material culture and for 30 years curated American Indian collections at the Denver Museum of Nature & Science. My long-ago “boyfriend” became my husband, Laurance Herold (MGeog’56), a University of Denver professor who made discoveries about prehistoric people’s adaptations to environment.

Riot on The Hill

Love the Coloradan and its articles, but this one [“Riot of ’71,” p. 8] by Paul Danish needs a little more info. My boyfriend then/husband now was on The Hill the first night of the riots. The reason for the large crowds on the street to begin with was that bomb threats were called into The Sink and Tulagi’s, so they made everyone leave those busy hangouts. A lot of people milling on the street were not sure what was going on. It was a scary time for sure!

I received my alum mag this week and I was disappointed to read about the space minor balloon release experiment [“CU Around,” pp. 45-46]. I know it is not always easy to avoid generating trash and litter, but I wonder if (and hope that) another activity could be persued to engage students? That would be my challenge to the program, especially since part of the goal is to “find pathways to address the significant issues our planet faces.” Thanks for listening! 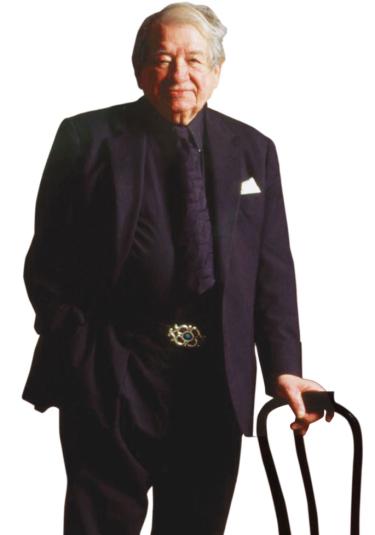 My wife, Alice Higman Reich, and I were glad to see that the Conference on World Affairs and its 70th anniversary were acknowledged [“Infographic,” pp. 23-24], but I was disappointed not to see at least a mention of Alice’s father, the conference founder and director for 45 years, Howard Higman. Among many others, he and long-time CWA participant Roger Ebert were the best of friends. Granted, Howard could be controversial at times, but, suffice it to say, if it had not been for him, there would be no CWA. This was his most important legacy to CU, the institution he loved, and I would hate to see it forgotten. 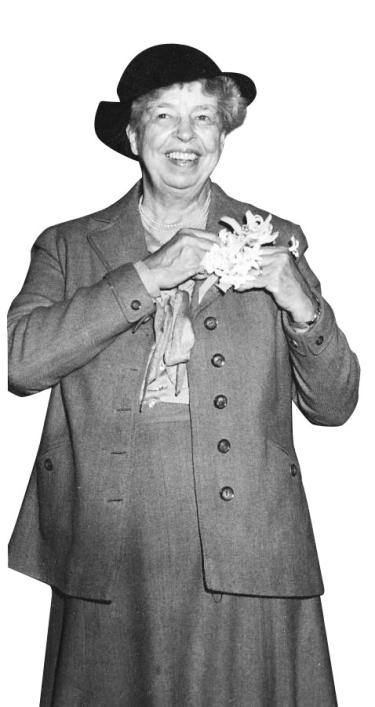 Of past speakers at the annual Conference on World Affairs [“Infographic”], Sarah Russell wrote: “Eleanor Roosevelt?? Oh, wow, that ’55 audience was so lucky.”

The Coloradan’s story and photo with CU’s Earl Morris (Psych1914; MA1916) prompted Myron Rosenberg to write: “When I moved to Boulder with my parents in 1949, my father drove a 1941 Buick. It had running boards, upon which I would ride home from Lincoln Elementary School at lunch. Note the water can next to the driver. And those are bed rolls on the running board. We, too, slept in parks, or in fields along the way. On the front of our car dad hung a two-gallon canvas water bag. The wetted fabric, exposed to the air current, caused evaporative cooling, maybe my first recollection of physics...followed by a pickup tailgate hitting me in the mouth as it fell into my tiptoed face. (Dad told me I was minding someone else’s business...a trait I’ve only enhanced, I fear.) I remember we had a whole bunch of crap tied on to the roof. This cross-country trip, prior to the Pennsylvania Turnpike, was slow, two-lane and memorably scenic. This type of travel was fun, and a veritable thrill I have never forgotten.”