In 1968 CU architecture student Bob White (Arch ex’71) was sitting in his red 1962 4x4 Chevy truck in Circle, Alaska (just shy of the Arctic Circle), out of money, food, gas and options.

He pulled out a map and realized he was as far north as you could drive on a road. So he decided to drive to Tierra del Fuego at the southern tip of South America.

“Giant decisions are sometimes made on the spur of the moment,” Bob said. Recently he sent me a book he wrote recalling the adventure. It’s titled The Trip.

And a splendid broth of a trip it was. 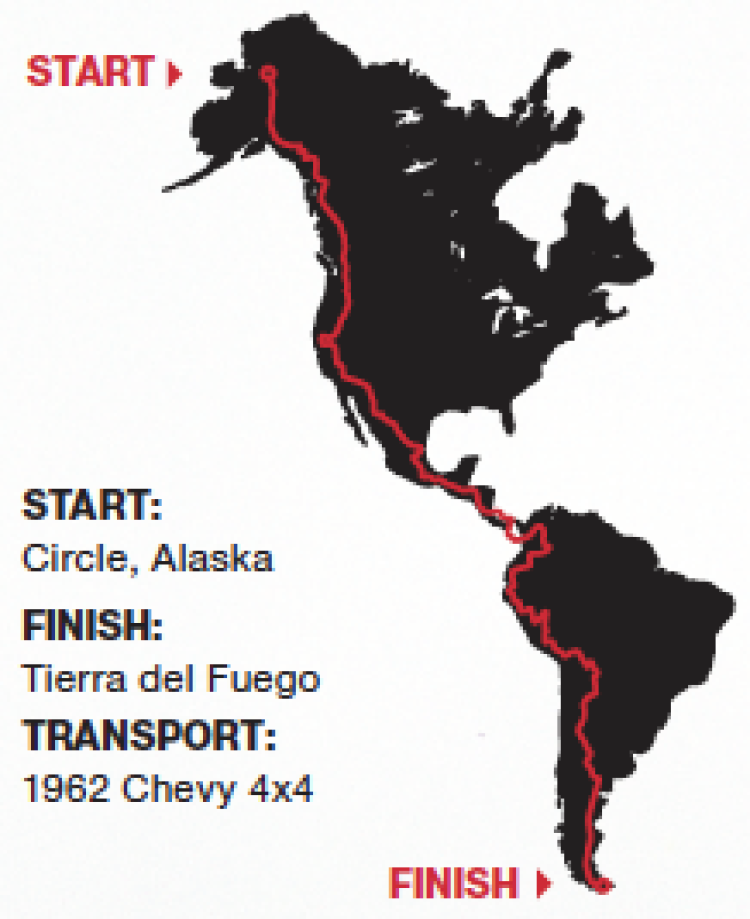 Bob was chased by a grizzly bear while camping near Lake Louise in Canada.

He drove across the frozen Yukon River as the ice was breaking up under his wheels.

In Mexico, he tried his hand at bull fighting. (The bull won; Bob landed in a pile of fresh bull stuff.)

He dined with a contingent of Los Indio’s de los Colorados, said to be headhunters, who served him the head of a capybara, a giant rat, as the entree. The chief showed him how to suck out the eyeballs and the brains.

He crossed the Honduras-El Salvador border as the 1969 Soccer War was breaking out and was pinned down in a firefight that went on for hours.

He had a chance meeting and several beers with Thor Heyerdal of Kon Tiki fame at a bar in Panama City, after which Heyerdal invited him to sail across the Atlantic on a reed boat.

He translated a radio broadcast of the first moon landing into Spanish for the residents of a Quechua Indian village 12,000 feet up in the Andes.

The Automobile Club of Argentina threw a reception for him.

And then there’s the possible encounter with a South American Yeti while camping in the mountains of Tierra del Fuego.

Back in Boulder, Bob became a successful builder; the San Francisco Townhouses on West Pearl Street are his signature project. In 1975 he got elected to the City Council, where we served together for four years, and became deputy mayor.

Today he lives on St. Croix in the American Virgin Islands. Alexander Hamilton’s mother is buried on his property.

His latest adventure has been surviving Hurricanes Irma and Maria.

“Young men in their twenties are driven to do things that seem off the wall later in life,” he said. “Whatever it is that drives them drove me.”