CU’s head football coach since late 2012, Mike MacIntyre won nearly every major college Coach of the Year award for the Buffs’ 2016 performance, including the Associated Press and Walter Camp awards. Here he reflects on the season and offers a glimpse of his life away from Folsom Field. A longer version of this interview is available here.

Can you pick one moment that stands out as the best/most memorable of the season for you?

That’s not a fair question! There were so many. I would say the most memorable moment, at the time, when it happened, was Ahkello Witherspoon’s (EBio’17) interception against Oregon. In the end zone. To seal the game.

Is there anything you’d do differently, as a coach, in hopes of changing the outcome of the final two games?

We built this program over the last four years. We’ve made incremental starts and then we made a big jump. The way everybody sees it, it all happened all of a sudden. Well, no it didn’t. It was built, built, built, built and then we made it. Of course, there’s different things looking back you can say you’d like to change, but we played two top-10 teams, played them in a big atmosphere. Now you’ve got to be a little more intense, execute a little better. When we get there next year, we’ll be ready for that.

The expectations will change heading into the 2017 season. How do you address that with the players?

Expectations are good. How you prepare on a daily basis to realize it’s the hard work is what helps you reach those expectations. We’ll probably be ranked going into next year, I would think, and so everyone is going to say, ‘Y’all have arrived.’ No, we go back to ground zero
and start working again.

What was it like to be a part of ESPN’s championship broadcast on Jan. 9?

It was kind of chaotic. It was fun to hear the perspective of the other coaches and watch it that way, but it was long. I was wishing I could go climb on my couch and take a nap.

What is your favorite running route in Boulder?

Wow. I enjoy running down Boulder Creek because that’s the place I can go to the most. … It’s funny, people used to try to run over me on their bicycles and now they wave at me and say, “Hi,” since we’ve been winning.

How many hours of sleep do you get a night?

Are you talking about straight through? Most of the time I’m waking up at 3 or 4 in the morning. … Spring break, I sleep good. Everybody’s in school, we can’t recruit, I go to the beach, hang out, get tired and sleep. I don’t even set my alarm clock. The other good thing is my cellphone doesn’t work too good down there [Amelia Island, Fla.] either.

Back to main article.

Coach MacIntyre reflects on the season and offers a glimpse of his life away from Folsom Field. END_OF_DOCUMENT_TOKEN_TO_BE_REPLACED

Athletic administrator Ceal Barry, the winningest women’s basketball coach in school history, completed her 30th year at CU-Boulder. Last summer she served as interim athletic director after the departure of Mike Bohn and before the hiring of Rick George. END_OF_DOCUMENT_TOKEN_TO_BE_REPLACED 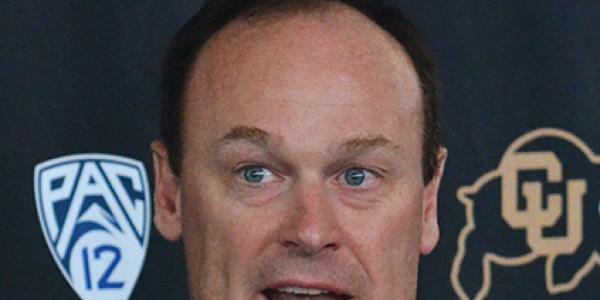