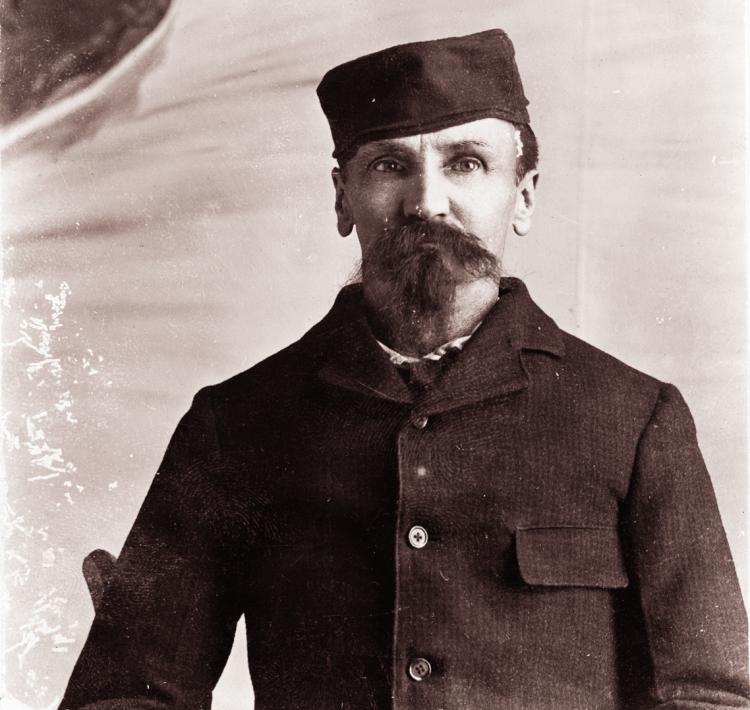 Paul Danish's summer issue column about how the UMC grill came to be named after Colorado cannibal Alferd Packer (above) elicited a proposal and a question. Danish responds.

Have Paul Danish’s (Hist’65) column in the Summer 2016 issue [“Boulder Beat: How the Grill Got Its Name”] blown up and framed and hung at the entrance of the Grill to help future students not mistake a CU president for a Colorado cannibal.
Franklin Bell (Jour’70)
Bluemont, Va.
I enjoyed the column about Alferd Packer and the Alferd Packer Grill. I have always thought that it was a good name. I was a graduate student at CU from 1961 to 1965, and as I remember it the grill was already called the Alferd Packer Grill. Since Paul Danish, the author, is from the class
of ‘65, we must have been here at the same time. Was the name unofficial in the early ’60s?
Nick Mousouris (MMath’63; Phd’65)
Longmont, Colo.
Columnist Paul Danish responds: I don’t remember the grill being called the Packer Grill informally before ’68, but it is certainly possible someone was doing it. When the UMC opened in 1954, it was referred to as the Indian Grill. When the space was expanded and remodeled in 1964, the name was changed to the Roaring Fork. It kept that name until it was formally re-branded after Packer in 1968.

As one of the head equipment managers for CU football, I had the assignment of being inside the team house during the 1977 [Fleetwood Mac] concert. Somehow I interacted with the stage hands. They needed or wanted something and I was able to solve their problem. They invited me to ‘come out’ and eat lunch with them. We went to the west side of the building after I locked up and sat at tables with some other people. Everyone talked and laughed and had a good time. Behind us out in the stadium the next act was performing. When lunch was over and we all stood up to return to our duties, only then did I realize I was lunching with the stage guys and the members of Fleetwood Mac!

The year that The Who played [1982], I snuck back stage to capture both Pete Townshend’s and John Entwistle’s signatures! I made a fake badge, got through security and hung out for most of the show back in the concrete locker room area with the band support (trying to look like I was supposed to be there).

When The Who came backstage for a break, I had to reveal my unauthorized presence to ask for autographs, got two in the food area and was kicked out before getting Roger Daltrey’s. The rest of the show was great from outside the stadium.

I just went through your summer issue and wanted to mail you to say how much I love your magazines.

I graduated CU in 1976 as a grad student in architecture. I had just gotten married in New Hampshire, and my wife Kathy and I left for what she called our three-year honeymoon in Colorado. They truly were the best years of our lives.

My undergraduate school was Boston College. I always tell people that I am the luckiest guy in the world to have gone to two of the most beautiful colleges on the planet. We tailgate at the BC football games, and there’s this recent CU grad who shows up every once in a while and we debate about which campus is prettier and he always tells me that BC doesn’t have the mountains. We do have Chestnut Hill, I say. I guess he wins.

Anyway, they are both gorgeous. Go Buffs.

Congratulations to Dr. Lori Bergen on her role as founding dean of the new College of Media, Communication and Information and to Eric Gershon for his outstanding interview [“Inquiry,” Summer 2016]. I was privileged to earn an M.A. in communication when Dr. Thorrel Fest was chair of the department. He was a pioneer in communication courses at NORAD and a personal friend of Vice President Hubert Humphrey. Other outstanding professors at that time were: Drs. Martin Cobin, Wayne Brockreide, Don Darnell and Margaret Robb.

I enjoyed doing a sabbatical in the late ’60s and again in 1981. At that time Dr. George Matter was chairperson and we were both from Salem High School in Salem, Ore. He was an outstanding debater, and we both (now in our early ’80s) played on the high school football team.