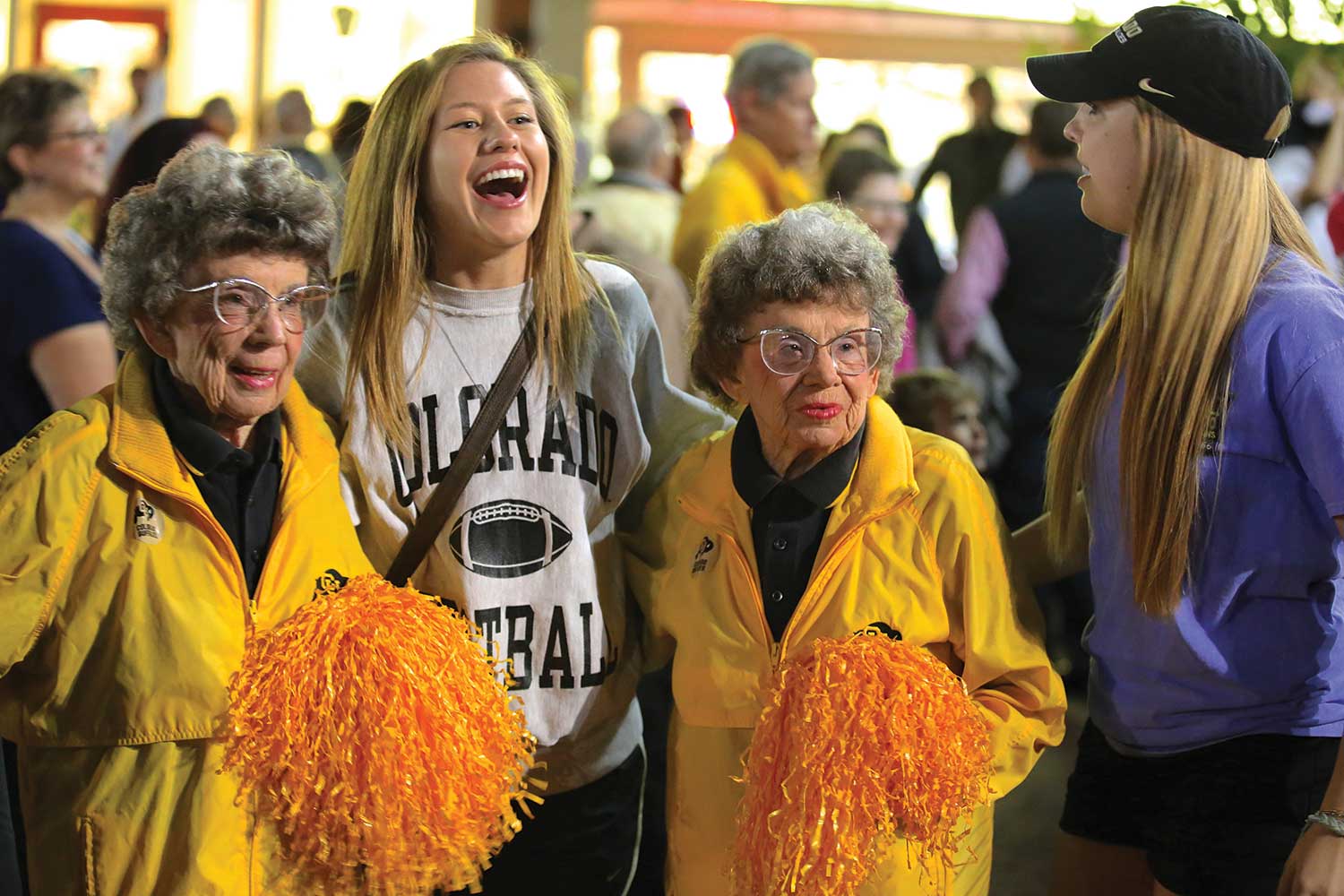 “The Twins,” aka Betty Fitzgerald Hoover (A&S’46) and Peggy Fitzgerald Coppom (A&S’46), on Pearl Street Mall during the 100th anniversary of Back to Boulder Homecoming Weekend in October.

What a great Back to Boulder Homecoming Weekend! Starting with the 85th Annual Alumni Awards Celebration, attending that oh-so-close CU-UCLA game, and concluding with the CU Opera production, “Pirates of Penzance,” it was all top notch!

Working on the 50th Reunion Committee became a wonderful time to reconnect with classmates while we planned our breakfast, class gift (a bench and support for the Esteemed Scholars scholarship program) and other weekend details. Kudos to our senior class president, Jim Kearney, who emceed the breakfast. Add to that cartoonist (and lawyer) Carlton Stoiber for his stellar presentation, “Four Years After Half a Century,” which took us all down memory lane.

Our reunion provided an opportunity to see friends, share stories, reminisce about the events that shaped our lives and, especially, the incredible importance of CU in our formative years. We noted with gratitude the foundation CU gave us for what we became as individuals and for our career paths.

There are traces of Boulder out here in New England. It’s fascinating, really, and almost insane. Maybe I shouldn’t act so surprised, not when there’s more than 200,000 living alumni, but then again I’m more than 2,000 miles away from the rustic steps of Old Main.

I’ve been living out in Connecticut for more than a year now and I’ve met CU alums while covering news as a local newspaper reporter and by being that obnoxiously proud alum who loves mentioning where he went to school. A sampling of the alumni I’ve meet: A World War II vet who met his wife on campus and has a gorgeous painting she crafted of campus hanging next to a photo of the warship he sailed on; a Brooklyn hipster who was in line at a Chipotle and noticed the Ralphie logo on my friend’s shirt; and the son of a big local business who reminded me of how cool the engineering dorms were, even if you had an odd number of roommates.

So don’t be shy next time you’re out in New England, or anywhere far from CU. Brag about Boulder. It might make you feel a little closer to home.

Don’t ask me why I rarely visit Boulder — the excuses are feeble. But recently I came back for a weekend and I’m glad I did. Sometimes I get nostalgic for alma mater.

Whenever I return, I remember that Colorado’s raw beauty has a way of beguiling you. This time the cottonwoods were transitioning from green to gold, the air was crisp, the sunsets were as magnificent as ever.

One day I went to campus, sipped coffee on the UMC steps and watched students hustle to morning classes. Above us, the Flatirons hovered with their jagged peaks hidden by a low cloud. To me they felt like friendly sentinels watching over Boulder. Their presence symbolized everything CU provided to me, and I felt lucky to have had this experience — and lucky I wasn’t rushing late to class.

I walk into the Marfeel office on my first day of work. It’s small, essentially one large room filled with 20 or so employees. It opens up onto a beautiful balcony that overlooks the bustling metropolis of Barcelona. I’m the only native English speaker in the company. A week later the COO is happy to tell me that we’ve hired a new VP of Sales named Yuri, who he makes sure to point out is American like me. Yuri and I quickly bond over our shared nationality. “Where did you go to school?,” he asks me. “CU Boulder, have you heard of it?,” I reply. He grins. “In fact I have, I graduated from there 20 years ago.”

Marfeel, a 20 person company in Barcelona, a city of 1.6 million, managed to hire two Buffs in the span of a single week. I moved 5,203 miles away from Boulder and my new boss graduated from Leeds, just like I did, 21 years before me. So here we are, representing the class of ‘93 and ‘14, working together in northeast Spain. It truly is a small world.

An article in the Coloradan (“Fractured Communities,” spring 2014) caught my attention as it affects me directly in my place of birth. Mora County, New Mexico, is the first county to outright ban fracking in the United States of America.

In our community it has become a David and Goliath issue — Goliath is the oil corporation and the people who are fighting back are the Davids. The Royal Dutch Shell corporation is currently suing the county for banning the practice in this beautiful pristine valley community.

Conflict exists here as well, but to divide the community is to conquer it, and the promise of jobs, economic growth, no negative environmental impact has been spread. In the Coloradan article Mr. Ryan, a CU-Boulder professor of environmental engineering, states, “We all recognize that we’re consumers of energy.” He goes on to mention the proverbial backyard statement.

We are not hypocrites and want to use energy benefits, but don’t want this industry here. There are other forms of energy with minimal impact, such as solar, wind and water, but the corporate oil and gas system has controlled the developing market to its advantage. Our vision is to keep this area as a food, air and water sovereign community so that we can sell food and quality water in exchange for energy.

The “fracking” debate has not been taken on. This is not a debate for the people of Mora County, New Mexico.