Thank you for your excellent work with the Coloradan. I very much enjoy reading it. The article on coffee is very good: “Are We Over-Caffeinated?” [Summer 2014 issue]. It is comforting to read that my four cups a day limit of coffee is within normal limits.

What a fantastic article. Thank you Christie Sounart (Jour’12) for the introduction to Murray Carpenter’s (Psych’85) fascinating book. It completely opened my eyes about where caffeine is “made.” I never thought that a vast amount of caffeine was synthetic. When I read that Monsanto created it back in the 1940’s, I threw my magazine across the room.

I look forward to each issue of the Coloradan, so please continue to bring us such fascinating articles.

The Summer ’14 issue of the Coloradan magazine had an article in the Campus News section about the increase in (CU) students going abroad [Hindsight is 2020, Spring 2014]. And those coming to CU to study. This is great news in an age where less understanding and tolerance of different cultures and views seem on the increase.

I hope that CU is “walking its talk” internally, because when I was accepted to the CU 1983 year abroad in Japan program, I had just been admitted to the CU business school. To my astonishment, the b-school would not entertain retaining me as a business student while abroad in ’83, despite Japan being the second largest free-world economy. So I dropped business as a major and instead focused on Japanese language. Retention and graduation rates are also tied to broader views and tolerance.

Thank you for your article “Peace in Sight” [Summer 2014 issue]. I enjoyed reading about my friend Jordan Campbell (Comm’91). We worked together at the REI store in Westminster around the turn of the century.

I climbed Mount Holy Cross with him shortly after he came back from Nepal. He was not feeling well mentally, physically and emotionally. I like to believe the successful climb helped him recover from his affliction. 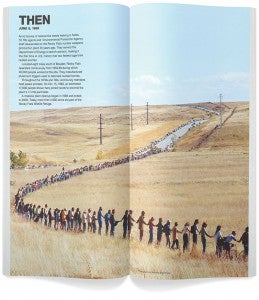 Paul Danish (Hist’65) and I were staffers on the Colorado Daily in the early ‘60s and his column, “History’s First Draft” [Summer 2014 issue], brought back vivid memories of that terrible Friday, especially his reference to teletype bells in the Daily newsroom.

I was a newbie working in the Denver bureau of United Press International the morning the world turned upside down. I was assigned the desk filing state news to our radio/TV clients in Colorado and Wyoming, including weather, crop and livestock reports. All around me were the incessant five bells announcing another grim bulletin from Dallas. Then came the five-bell flash that JFK was dead. It was at the end of a long, gut-wrenching shift that I was informed I had been filing all of yesterday’s state news — and in the chaos no one had noticed (or really cared) except the bureau manager.

Paul, John Mitchell was right (he was seldom wrong): Despite your initial reservations, you were obliged to put out that extra, warts and all. I’m sure you took some heat because of the mistakes, but that’s how we learned. I hope you framed that broadsheet extra and hung it in a prominent place. I wish I could have framed my lapse amid the ringing bells; it might have avoided some more to come.

The clattering teletypes are gone now, but their bells that day still haunt a generation of Unipressers.