Rick George was introduced as CU’s sixth full-time athletic director on July 17, succeeding Mike Bohn. From 1987-91, he was assistant athletic director for CU-Boulder’s football operations when the Buffs won a national football title. George also has worked as president of business operations for the Texas Rangers, as an executive for the PGA and Champions Tours and for the nonprofit Fore!Kids Foundation. He also worked at Vanderbilt and Illinois.

You’ve had many jobs in the interim, but does this feel like coming home?

It really does. My wife and I had a great experience here. We gave birth to one of our children here. We had a lot of success here and we both love college athletics. It’s just the right place for us, and we’re excited about it. I can’t imagine any place we’d rather be.

Did you think you would return to college athletic administration?

It’s been a dream of mine since I played college football [at Illinois] and graduated. If you look at my bio, it was always something I said — that one day I’m going to be a general manager in the NFL or an athletic director at a great academic institution. And here we are 30-some years later, and I couldn’t be happier.

The CU administration was looking for somebody with strong fundraising and financial management abilities. What do you bring to the table?

I have experiences in a lot of different areas, including fundraising. To me it’s about relationships and having something that people can get passionate about and share. I’ve worked in multiple sports and professional and not-for-profit. It gives me the ability, I believe, to run an efficient, effective business.  I’ve been in sports for 30-some years. I know how the sports business is run and how to generate revenue.

CU athletics is in a tough financial situation, running a deficit and trying to raise a lot of money for facilities. How tough a situation are you stepping into?

Athletic directors are often judged by their major coaching hires. Tell me how you might approach staffing.

In every place I’ve been I’ve had people leave or I’ve had to make changes with personnel. My philosophy is we should always try to upgrade our talent if someone is to leave the athletic department. And they have to fit the values that we want in all of our coaches and staff.

Will duties in the athletic department be divided up differently than in the past?

I’m not one who likes to come in and make wholesale changes. I want to see how it’s run today. In all the jobs that I’ve come into, I’ve had to go in and make changes after time, but I don’t do it for the sake of change. I see what’s best for the organization. 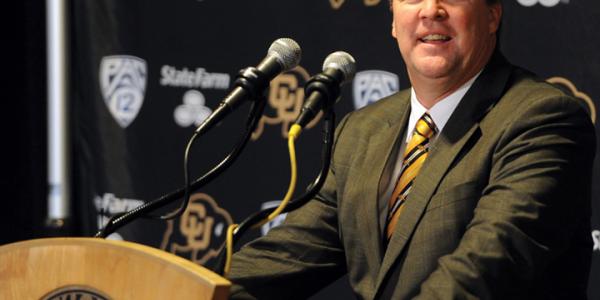 Darrin Chiaverini played on three bowl-winning Buffs football teams and in the NFL. Now he's a CU coach on the best Buffs team in a decade. END_OF_DOCUMENT_TOKEN_TO_BE_REPLACED

Most college athletes arrive on campus with years of practice behind them. Melissa Latas had none in cheerleading. END_OF_DOCUMENT_TOKEN_TO_BE_REPLACED