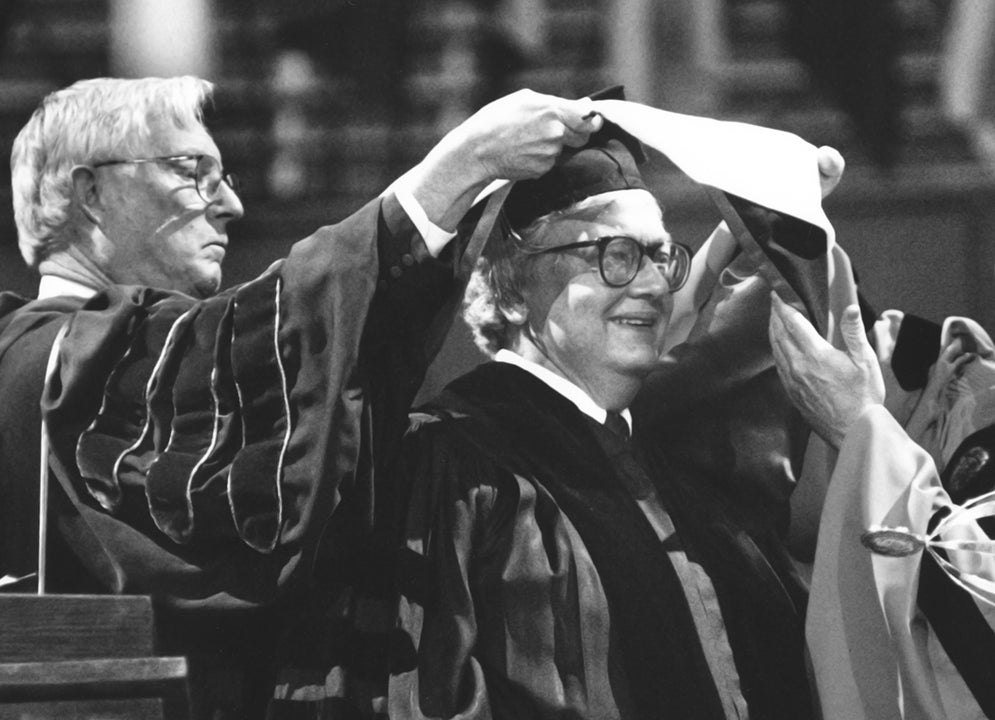 Roger Ebert receiving his honorary Doctorate in Humanities in 1994.

I didn’t realize what a truly special guy Roger Ebert (HonDocHum’93) was until the first time I saw him type. His copy didn’t contain any typos.

Several of us were writing a charter and bylaws for the U.S. Student Press Association, which had been founded the year before. Roger was its first president.

And, being overly verbal and opinionated little dickens, we were driving ourselves nuts. At one point I was literally banging my head on the wall. (Roger would gleefully remind me of that whenever we met.)

Anyway, after listening to a couple hours of bickering, Roger said, “OK, I’ll type up a summary of what we’ve agreed to so far.”

We hadn’t decided anything, but everyone was too tired to argue with him and needed a bathroom break. The room emptied, and Roger sat down at a typewriter that had materialized out of somewhere and started to bang away.

In about 10 minutes he produced a polished summation of all the stuff we had agreed on without realizing it. The prose had the same easy grace and Midwest directness with which he spoke and wrote for the next 50 years.

And the first draft had barely a typo, an x-out or a revision in it.

As one who always had an adversarial relationship with manual typewriters, I found this mind-boggling.

Here was a guy who could take people’s sloppy thinking and turn it into a polished draft at 60 words a minute. I knew there was something special going on here, and it wasn’t just his flying fingers. The special part was what was going on between his ears.

In 1970 I met Roger at Stapleton International Airport (of blessed memory) and drove him to Boulder for his first Conference on World Affairs. As we started up Davidson Mesa, the snow began to fall. The next day I measured 3 feet of snow in my yard. So I can honestly say I drove Roger Ebert to his first conference through a Colorado blizzard.

How did Roger feel about the conference he would attend 37 times?

“Many felt, as I always did, that the conference was the time when you found out about what was new,” he wrote in a memorial book about sociology professor Howard Higman (Art’31, MSoc’42), the conference founder.

Of Higman, he wrote, “He was large. He contained multitudes. He would have filled Falstaff with envy,” and “he was a man who liked to be part of a good conversation.”

That pretty well describes Roger, too, but I would substitute “Dr. Johnson” for Falstaff in Roger’s case. Roger was just as smart, just as witty and just as opinionated — and a lot better tempered.