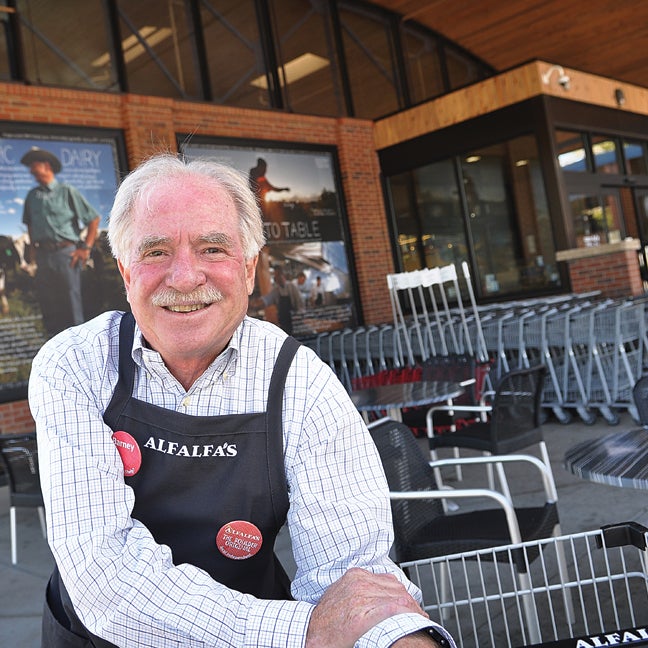 Barney Feinblum (MBA’75) helped transform the natural food industry from a hippy niche to an $81 billion enterprise. His most recent project? Reopening the legendary Alfalfa’s on Broadway and Arapahoe.

In almost every conceivable category, healthier, eco-friendly alternatives exist. But it wasn’t always so, recalls Barney Feinblum (MBA’75) who reopened the Boulder natural foods grocery last year at its original location on Broadway and Arapahoe where it had been from 1983 until 1996.

“Back in the day, you had to be pretty committed to buy this stuff,” says Feinblum, 64, who moved to Boulder from the East Coast in 1972 and — at the urging of his wife-to-be Julie Ann — started shopping at hole-in-the wall natural foods stores in Boulder.

“If you got apples they were shriveled with worm holes, and the produce looked a little stepped on. You definitely didn’t have coffee or red meat or alcohol . . . The industry has come a long way.”

Feinblum should know. As former CEO of Celestial Seasonings and Horizon Organic Dairy, and the voice of financial reason behind numerous other natural product companies, the diminutive, bespectacled dealmaker has not only watched the industry’s wild ride from hippy niche to $81 billion goliath, he has — in many ways — been driving the bus.

“He was a critical part of two companies that ended up taking natural products out of the health food niche and into mainstream America,” says Alfalfa’s co-founder Mark Retzloff, who first met Feinblum 30 years ago. “He is one of the icons of the industry.”

Born in Brooklyn, N.Y., in 1947, Feinblum got his “basic training in life” in the city before heading to Cornell University for a degree in industrial engineering and immersion into the ’60s counterculture.

“The seeds of revolution were being planted, and I jumped in,” recalls Feinblum, his accent tinged with a hint of New York, his rosy cheeks sporting a Boulderesque glow.

After hearing about Boulder from a Buddhist friend, he gravitated West, taking a series of jobs in the pre-fab home business before enrolling at CU for an MBA in finance. He lovingly credits Julie Ann, his wife of 38 years, for footing the bill.

His first job out of grad school was a lucrative but wholly unglamorous one, working the night shift as a foreman at the Samsonite Factory in Denver. As the suitcases rolled off the conveyor belt emblazoned with the tag “built under the supervision of Barney Feinblum,” he dreamed of a shorter commute and better hours. When his wife clipped out a tiny ad for a job at Celestial Seasonings, he donned a suit and tie, grabbed his briefcase and went calling.

“I was greeted by the secretary who was barefoot and lived in a tepee and led me up to the head of human resources who was in shorts and a T-shirt,” he recalls. “I immediately took a two-thirds pay cut and went to work for this group of rag-tag hippies. I think I was the first one hired into management who was not a friend or relation.”

With his unique blend of business and engineering smarts, East Coast bluntness and ’60s idealism, he was a welcome addition to the industry.

“What Barney always brings is good financial discipline,” says Retzloff, who founded the original Alfalfa’s at Broadway and Arapahoe in 1983 and met Feinblum when he reached out to Celestial Seasonings for financing. The two have been partners in numerous ventures since.

“A lot of entrepreneurs have good ideas and are passionate, but you also have to have someone who understands the business end,” he says. “That’s Barney. He likes to do deals.”

By the time Feinblum left Celestial Seasonings in 1993, the company had grown from a $5 million company housed in eight makeshift warehouses to a $55 million enterprise with a state-of-the-art 150,000 square-foot factory. 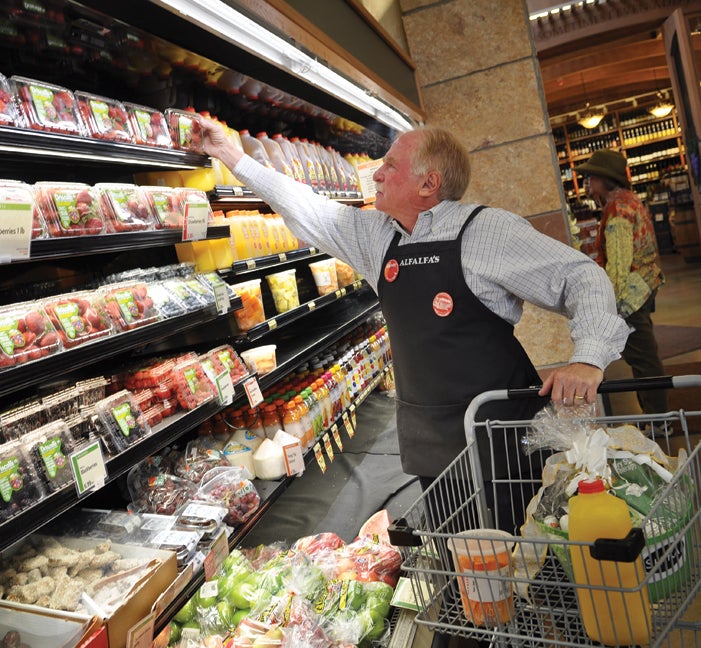 Barney Feinblum (MBA’75) shops in Alfalfa’s Market in Boulder, which offers a café, a wine and spirits shop and natural and organic products, including in-house smoked meats.

But those years were not always smooth.

In 1983, just hours after the company held its Initial Public Offering, a Mississippi woman landed in the hospital with blurred vision after drinking Celestial Seasonings tea she claimed was contaminated with the toxic plant belladonna. Feinblum, then chief financial officer, had to abort the IPO.

“It restricted capital to the natural products industry for a decade,” Feinblum says, calling it one of the lowest moments in his career. “It put a negative financial tone on the whole industry.”

The following year, Kraft Foods purchased Celestial Seasonings and made Feinblum CEO. But the stodgy corporate Kraft and the funky grassroots Celestial clashed. At one point, the Velveeta giant sent in “spies” to investigate rumors that there was a “drug problem” at the tea company, Feinblum recalls. He started scheming a way to buy the company back.

In 1988, just as tea-giant Lipton was poised to swoop in, buy Celestial from Kraft and close the Boulder plant, Feinblum and Caryn Ellison (MBA’82) — Celestial’s planning director at the time — pulled off an 11th-hour deal and purchased the company back with the help of investment group Vestar Capital Partners.

“We wanted to keep the culture of Celestial and its values alive,” Feinblum recalls. “It was about empowering employees. There were no glass ceilings for women, minorities or gays. We had concerns about the environment and corporate responsibility and giving back to the community.”

After leaving Celestial Seasonings in 1993, Feinblum took a job at Horizon Organic Dairy, which Retzloff and partner Paul Repetto had launched in 1991 as a yogurt company.

Feinblum led the company to its own IPO in 1998, and by the time he left the company in 1999, sales were close to $90 million. Today, Horizon is the best-selling dairy brand in America.

“Milk went on to become the gateway product for people to get into organic foods,” Retzloff notes.

Feinblum has since gone on to found organic winemaker Organic Vintners, co-found Greenmont Capital Partners, a Boulder-based venture capital firm, and served on the boards of several other natural products companies. He also serves on the board of the Deming Center for Entrepreneurship at CU-Boulder.

But one of his proudest moments came on Earth Day 2011 when he helped to reopen Alfalfa’s, a mainstay in Boulder that closed in 1996.

Rival Wild Oats had purchased the iconic natural grocer in 1996, and when Whole Foods Market gobbled up Wild Oats in 2007, the Federal Trade Commission — concerned about anti-trust issues — ordered Whole Foods to sell dozens of its stores, including the one at Broadway and Arapahoe.

“We felt it was important for the store to be back in town and really represent what the Boulder community is all about — locally owned and engaged with the community and the neighborhood,” Retzloff says.

Sitting in his office, adjacent to the 20,000-square-foot Alfalfa’s brimming with organic milk, herbal teas and shelves full of other products he helped bring to market, Feinblum — who is eyeing retirement soon — couldn’t be more proud.

“It has been really fun to see all the things we preached about years ago coming to pass,” he says. “We made decisions based on values, not necessarily what would pay the most money. We did it to change the world, and we ended up being rewarded.”

Here’s a look at a few CU-Boulder grads who have played a pivotal role in growing the natural products industry.

Chad Arnold and his team at door to door organics are helping to reinvent grocery shopping for the digital age. END_OF_DOCUMENT_TOKEN_TO_BE_REPLACED

While traveling the world to understand everything there is to know about caffeine, Murray Carpenter uncovers some shocking surprises. END_OF_DOCUMENT_TOKEN_TO_BE_REPLACED

CU astronomer Doug Duncan has some advice about this summer's total eclipse: Don't miss it. END_OF_DOCUMENT_TOKEN_TO_BE_REPLACED