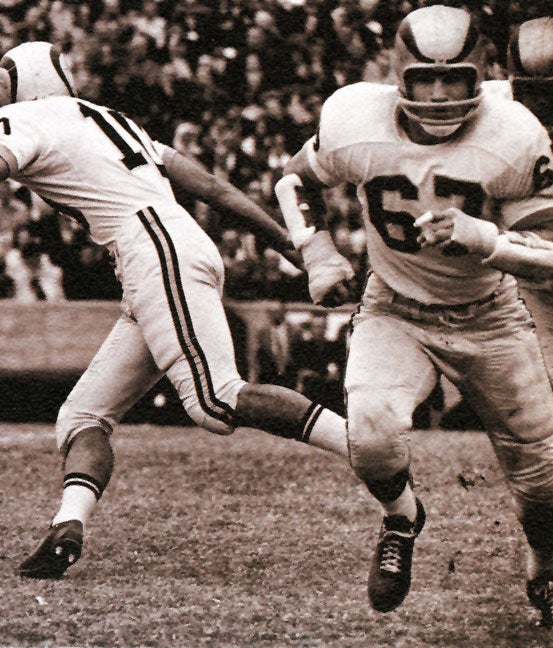 There’s been a lot of talk about traumatic head injuries in football this year. I figured if anyone associated with Buffalo football would have an interesting take on the issue, it would be CU’s two-time All-American guard/linebacker and Rhodes Scholar Joe Romig (Phys’63, PhDAstro’75).

Back in 1960 — don’t ask me how I remember these things — Joe and another CU player got wired up with assorted sensors and instrumentation and then ran full tilt into each other so the forces and shock waves from the collision could be measured.

Joe, an astrophysicist, lives and works in Boulder County, so I gave him a call and asked him to share any thoughts he might have on the experiment and head injuries generally.

“I’ve never been hit that hard or hit anyone that hard in a game,” Joe said. “I think we were very lucky. If we had hit wrong, one of us could have had a neck injury.”

The sensors registered forces of 50 to 75 gravities down their spines for 8 milliseconds. A jet fighter in a tight turn pulls 9 to 12 Gs, albeit for longer.

The other player was Larry Cundall (A&S’62), who also played guard. They started 20 yards apart and ran at each other as fast and hard as they could and hit shoulder to body.

Larry was knocked out. Joe’s shoulder was partially dislocated.

There was more to the test than pure love of science. It was staged for Sterns-Roger Co., which was designing an ejection seat for the Air Force. The Air Force wanted a seat that subjected an ejecting pilot to no more than 15Gs for 20 milliseconds. Sterns-Roger was having trouble meeting the specification and wanted to show the Air Force it was excessive — by showing that people encounter similar or greater forces in everyday life — like when they run into a linebacker.

A grateful Sterns-Roger later treated them to a steak dinner.

Twenty-six years later Joe’s wife, Barbara, was in a traffic accident in which her head absorbed a tremendous blow. Joe says she eventually recovered with few aftereffects.

“Her logic is very good; I haven’t won an argument, ever,” he said, but recovery required months of treatment at Boulder Community Hospital’s Mapleton Center for Rehabilitation. That got Joe interested in the head injury issue.

He said there is a lot more going on with shockwaves from collisions than is generally realized. The blows generate short, sharp multi-G shock waves that are focused and reflected back into the brain by the inside of the skull.

“I think a lot of the damage occurs on the micro level. The shock waves are focusing from a curved surface . . . We take ourselves for granted.”