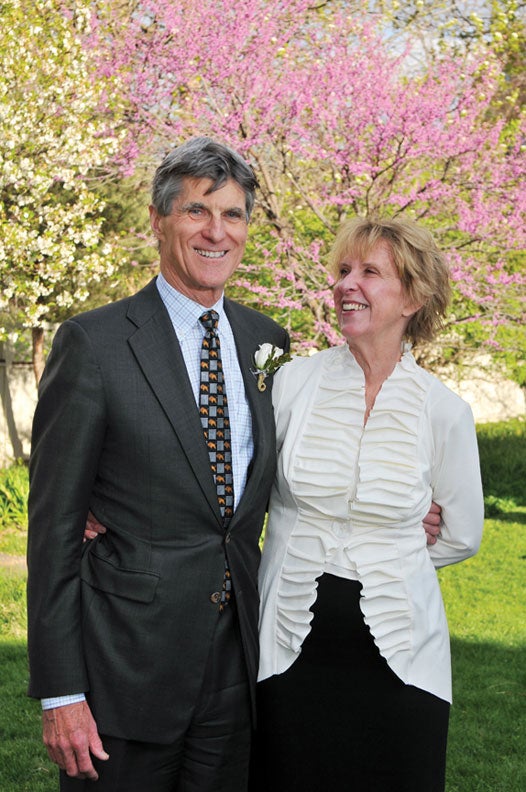 Congratulations on your fine remembrance of David Getches [page 23, September Coloradan]. We worked together in the cabinet of Colorado Gov. Dick Lamm, had offices in the same building and spent hours and hours trying to figure out how to get the legislature to see things our way. He was the brains, and I was more of the political operative.

I had been planning to go up and see him when I heard of his illness, but it just happened so fast and suddenly he was gone.

Your great pub just came to the top of my stack — terrific! Just some highlights [from the September Coloradan]:

Thanks to you and staff for an outstanding issue.

Congratulations on recent changes in the Coloradan. It is colorful, readable, even thought-provoking, and a great asset to the university.

What exciting news about the [first place] Council for Advancement and Support of Education (CASE) magazine award. That is truly tremendous and richly deserved! The Coloradan magazines are so bright and entertaining, plus edifying in a totally easy-to-enjoy way — the numbers, the colors, the quick bites, the layout. No wonder it’s an award winner! And I read every story this time [September issue]. They all had such human interest while spanning a variety of subjects.

And yet another great job on the recent Coloradan.

I especially like the photos of the campus in every edition. I like the layout/format of the publication — easy to read and keeps my interest moving. The breadth of topics covered in the array of articles keeps me informed.

I loved your piece on Old Main [pages 40-41, June Coloradan]. I had Spanish class in that building. I passed.

I am so impressed with Chipotle [pages 4-9] after reading the September Coloradan that I am going to start eating there. I had no idea what a progressive and green effort they are making . . .

As political science students at CU in the 1960s, we were introduced to Dr. Edward Rozek [June 2009 Coloradan] and were very impressed with his life story. As a young Polish tank commander he fought in Europe and was wounded and imprisoned during World War II.

Dr. Rozek’s lectures taught us about the greatness of the American system of government and its fight against tyranny throughout the world, especially communism. He was a man of great integrity and listened to both sides of an argument.

When Dr. Rozek passed away in 2009 we thought it fitting to honor him with a plaque on the Boulder campus. Thanks to donations from many of his former students, friends and colleagues, the plaque was dedicated in June 2011 at Hellems.

The plaque is inscribed with his favorite saying, “If I were a rich man I would pay for the privilege of teaching.”

There is an error in the article “Forever Buff Jon Embree takes charge” [pages 10-13 in the September Coloradan] that states coach Embree (Comm’88) is the only minority head football coach in the Pac-12.

David Shaw is the first-year head football coach at Stanford and also a minority. I can think of five minority coaches that have worked in the Pac-10 or Pac-12. They are Ty Willingham (Stanford), David Shaw (Stanford), Embree (Colorado), Dennis Green (Stanford) and UCLA had Karl Dorrell just before Rick Neuheisel. I am up to five black coaches. There may be more? Should be!

Editor’s Note: Thanks, Dick, and my former journalism school classmate John Borstelmann (MJour’99) who took the time to point this error out to us.

Embree became just the fourth African-American head coach in Pac-12 Conference football history (with Stanford’s David Shaw the fifth a month later). Dennis Green was the first when he coached Stanford (1989-91), followed by Ty Willingham, also at Stanford (1995-2001) and then former Colorado assistant Karl Dorrell at UCLA (2003-07); Willingham also was head coach at Washington (2004-08). Nationally, Embree is one of seven African-American head coaches among the 66 BCS schools and one of the 16 at the 120 Football Bowl Subdivision programs.

So many buildings and so few maps

I’m sure I’m not the only alumna who would love to see a map of the current campus printed in the magazine. Whenever we read of a new building being constructed, it’s very difficult to figure out exactly where it is located. Is the quadrangle filling up or has it been left for greenery?

[Editor’s Note: Rest assured, Margaret, the Quad still is full of greenery. Thanks for the feedback. We will work on including a map in an upcoming issue.]