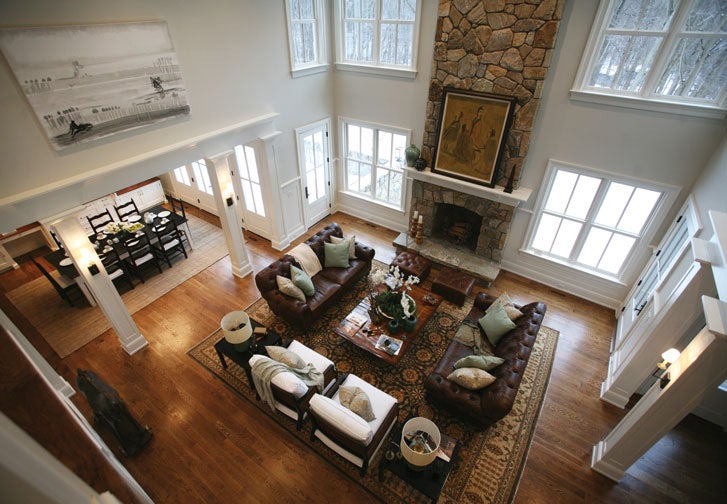 Meridith Baer (Jour’70) applies her screenwriting skills to help the rich and famous sell their homes.

It’s 7 on a weekday morning in Los Angeles, and a 135,000-square-foot warehouse in a grubby industrial neighborhood comes to life.

Trucks line up at the loading dock carrying off (or bringing back) Louis XV chairs, Aubusson carpet, mountain bikes and golf clubs.

Inside, designers scurry for antique lemonade bottles, cast-iron pigs and other decorative props on an endless maze of tables.

Out back in a scruffy field, staff tend to a mini-nursery filled with orchids, palms and terracotta planters.

Standing in the middle of it all is Meridith Baer (Jour’70), a former model, actress and Hollywood screenwriter who fashioned her ultimate plot twist at age 50 by reinventing herself as a niche entrepreneur. In little more than a decade, Baer has become Los Angeles’ star of staging — the gentle art of temporarily furnishing and decorating a home so it sells faster and for more money.

Baer is known for her signature mix of elegant furniture, light palette and quirky little touches. Focusing on homes worth $10 million and up, she and her designers, movers, carpenters and upholsterers swoop down on an empty home and create just the right ambience for a high-priced sale. But she remains a storyteller at heart.

Prospective buyers can’t imagine an empty house as a home, but Meridith Baer & Associates’ petite, amiable owner can. Applying her screenwriting skills, she walks into a home, envisions who might buy it, makes up characters and decorates for them.

The formula certainly works. Baer stages more than 300 homes a year in LA’s richest enclaves, employs a staff of 80, says her business has doubled nearly every year since 1998 and has an A-list clientele that includes celebrities Brad Pitt, Halle Berry, Bob Dylan, Harrison Ford, Sharon Stone and Reese Witherspoon.

“I’ve worked with a lot of stagers and it’s almost blueprint with [Baer],” says Laura Pardini, a Los Angeles Realtor who operates My L.A. Lifestyle, a website. “She creates a movie set. She transforms an empty house — almost like magic. It’s no secret she was in the entertainment business.’’

Baer’s work has been featured on Home and Garden television, ABC, NBC, The Discovery Channel, The New York Times and Los Angeles Times Magazine. In fact, homebuyers like her work so much they often purchase the house and the appointments in it, which inspired Baer to create her own line of furnishings. 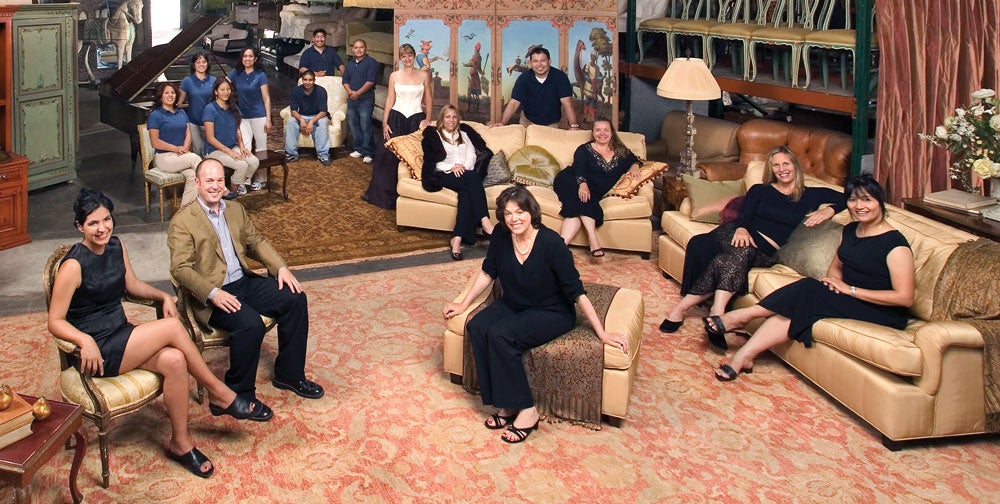 Not bad for a girl who grew up on the grounds of San Quentin State Prison, the daughter of the warden.

“I think we’re all good at things we don’t know about,” Baer says. “The last thing I’d ever thought I’d be is a businessperson. I never dreamed business could be so much fun.”

Looking back at her life, Baer sees early signs of her talent. When she was 15, her father moved the family to Des Moines where he’d been hired to run Iowa’s prisons. Her mother started fixing and selling houses, sifting through antique and estate sales for furnishings.

When she was 20, Baer married a photographer and started flipping homes in Boulder. The marriage didn’t last, but Baer emerged with the visual and manual skills that would come in handy years later.

In 1970 Baer was on her way to Regent Hall when a young New York ad rep approached, asking if she would like to be in a Pepsi commercial he was producing in Boulder. His name was Jerry Bruckheimer who was years away from producing hit movies like Top Gun.

“It was so random,’’ she says. “We ended up doing three commercials.’’

After graduating with a journalism degree, Baer moved to New York City where she worked as an editorial assistant at Penthouse Magazine, wrote a column — “The Passionate Shopper’’ — for New York Magazine and picked up other freelance work.

Returning to modeling, she appeared in more than 100 print ads and TV commercials during the next several years. Her clients ranged from Pepsi to Benson and Hedges cigarettes.

“I was little, cute and outdoorsy in New York,” Baer says. “I was the Colorado type, the girl next door. There weren’t a lot of those in New York.”

When she moved to Los Angeles, Baer parlayed her girl-next-door look into small acting jobs in movies and TV shows like Happy Days. But her big break — a major role in a proposed series — unraveled at the last moment.

“It was devastating,’’ she says. “But this is what I love about life — it turned out to be the best thing that happened to me. They had to pay me, so for the first time I had money in the bank. I took a year off and wrote my first script.’’ 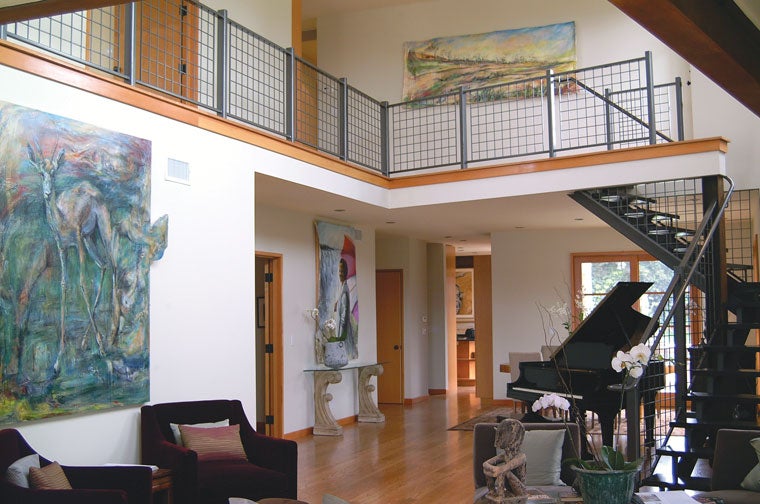 Meridith Baer (Jour’70) decorates rooms like this one to help owners sell their houses.

Based on her experiences at San Quentin, her debut screenplay sold for $250,000 and was made into a movie called Prisoners starring Tatum O’Neal.

“I was a reasonably successful screenwriter, but I only had a couple movies made and they weren’t really what I wrote,” she says. “At the end of the day I was feeling extremely frustrated.”

Meanwhile, Baer dated author Michael Crichton and English actor Patrick Stewart. During her two-year relationship with Stewart, she traveled and focused on things other than work for the first time.

When the relationship ended, she rented a 1,000-square-foot home in Brentwood, a suburb of Los Angeles.

Baer poured her money and energy into the home, furnishing and decorating it so beautifully that the owner decided to move back in.

“He said, ‘I love what you did. Get out,’ ’’ she says. “If I’m talented at anything, it’s at kind of seizing the moment. So instead of starting to cry, I called a friend who was trying to sell his house. I said, ‘Why don’t I put my stuff in your place?’ He gave me two weeks.”

Baer decorated it with her furniture and plants. It sold in 24 hours for half-a-million dollars more than the asking price in a bidding war. One real estate broker after another asked her to do the same for them.

Scouring antique shows, flea markets and estate sales, Baer began loading up on furniture and knick-knackery to dress up homes.

“Watching a house being transformed into a beautiful inviting home was incredible,” says Valerie Jean Hiss of Coldwell Banker Pacific Palisades, whose clients hired Baer. “Meridith has a fabulous design sense and an enormous appreciation for what makes buyers comfortable. The house sold in multiple offers the first week.”

Baer charges $20,000-50,000 for her work as well as a monthly rental fee if the house remains on the market. But even a sluggish economy hasn’t slowed a woman who has always written her own script.

“I always have to have something to do, something to think about,’’ she says. “In the early days, I staged every home myself. I did the bidding, bought everything and installed everything. It was in the second year that brokers started referring to it as ‘staging.’ I said, ‘What’s that?’ They said, ‘That’s what you do.’ ”

CU-Boulder alumni rank among pro ultimate disc's top players and promoters. Can they take the sport mainstream and big-time? END_OF_DOCUMENT_TOKEN_TO_BE_REPLACED 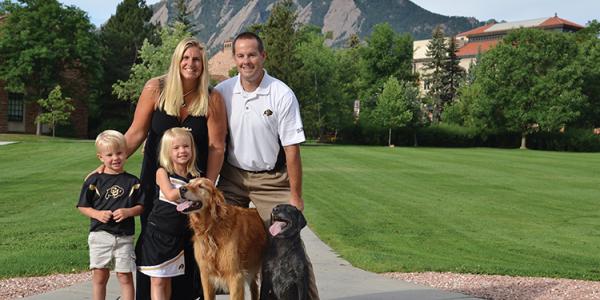 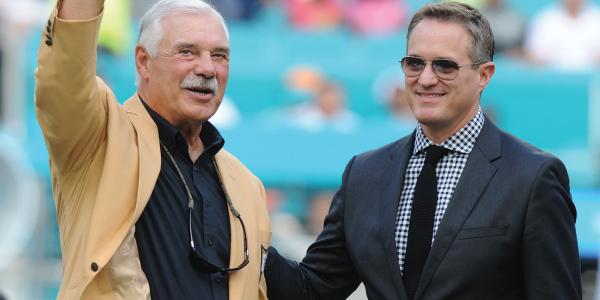 Tom Garfinkel, a big success in the business of the NFL, proves a Buffalo can become a Dolphin. END_OF_DOCUMENT_TOKEN_TO_BE_REPLACED