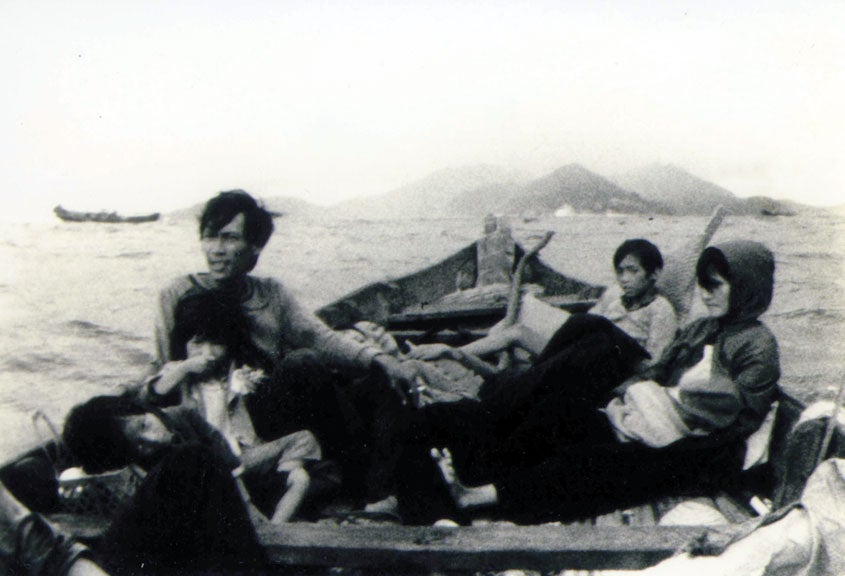 Quynh Nguyen Forss (Jour’95) leans against her dad with her sister at left and her mom and newborn sister directly across from them as they fled Vietnam in 1979.

Standing in the checkout line with a cart full of groceries at Pacific Ocean Marketplace, my 5-year-old daughter Madison tugged at my shirt.

Pointing at the grey-haired couple chatting in front of us, she asked, “Mom, what are they saying?”

I told her they were speaking Vietnamese and thought they were from Vietnam, a country halfway around the world where I was born.

“Vietnam? How did you get here?” she asked.

It was the first time I had explained to my daughter where I’m from. I was Madison’s age when my family fled.

I remember being very tired when my mom woke me on July 1, 1979, and said we were going on a trip.

When I asked where to, she said, “It’s a special place. I’ll tell you later.”

In the dark, she rushed to get my toddler sister Nhu and me dressed and to the docks at Han River where my dad waited for us. They were racing against the sunrise.

Dad was an officer in the South Vietnamese Army who fought alongside Americans during the Vietnam War. After the communists took over, they put him in a “re-education” camp where he was abused and tortured while others were executed.

When released three years later, dad reported weekly to the new government and turned in a log of his activities.

Fearing for his life and wanting a better one for his family, my strong-minded 26-year-old dad decided we should flee the country.

After 10 months of planning, we crammed 17 people on a 15-foot wooden fishing boat with a rebuilt engine. My parents paid a fisherman all of their savings for the escape vessel.

To complicate matters, mom was nine months pregnant. Nevertheless, my parents were determined to leave before she had the baby. They figured since dad was under communist surveillance, no one would suspect he’d dare escape with a pregnant wife.

Our destination was a refugee camp in Hong Kong about 600 miles away. Dad thought the trip would take three days. We hid under the boat’s worn timber platform while dad and his friend posed as fishermen on the deck. My mom gave Nhu and me sleeping pills to keep us quiet. Dad nervously steered our boat toward the South China Sea, inching closer to armed guards patrolling the area. Getting caught attempting to escape could mean prison, maybe even death.

Luckily, the guards didn’t suspect anything.

Once the sleeping pills wore off, I looked around me. All I could see was water, which stretched with seemingly no end in sight.

I asked mom, “Now can you tell me where we’re going?”

She said we were going to visit grandma and grandpa in America.

Suddenly, the engine stopped working. Dad tried frantically to fix it but couldn’t get it to restart. It became painfully obvious to the adults that we were stranded at sea.

I recall the heat was awfully intense. My dad used fishing poles to prop up a blanket to shield us from the sun’s unbearable rays.

I kept asking, “Why is it taking so long?”

Trying to keep me calm, mom replied, “We’ll be there soon — don’t worry.”

But no one knew what would happen to us. The waves continued pushing us along.

On the second evening, mom warned dad she was in labor. He had hoped for a birth at daybreak because the sky was turning a deep black. Despite that, under the glare of two flashlights around 3 a.m., mom miraculously gave birth to a healthy baby girl. I slept through the delivery.

Dad cut the baby’s umbilical cord with a pair of nurse’s scissors and tied it off with some fishing line. Fittingly, my parents named my sister Dai Duong, which means Grand Ocean.

We floated aimlessly for days, steadily running low on rice, crackers and water. Dad gave his portions to me, Nhu and mom who had to eat enough to breast-feed Dai Duong. Dad puffed on cigarettes to curb his hunger.

On the 10th day, a Chinese naval ship came to our rescue and the crew helped fix our engine. I can still picture the ship’s immense size as it maneuvered toward our boat.

We reached Hong Kong nearly three weeks after we escaped. We spent several months at a refugee camp, sleeping on the floor of a crowded warehouse with thousands of other Vietnamese waiting for resettlement. I remember feeling anxious to leave.

We immigrated to the U.S. and lived with my grandparents until my parents could afford a one-bedroom apartment in Denver. I didn’t speak English and remember practicing everyday to sound like my classmates in elementary school. I repeated things I heard on TV and rehearsed words in the mirror.

Beyond language, another barrier I faced was my parents’ strict rules. I missed out on slumber parties, sports victory celebrations and other social activities in high school because dad always said, “Nothing good happens to teens after 9 p.m.” I resented him for being overprotective but later realized his intentions when I became a parent.

My parents expected us to study, get good grades and go to college, which they believed was key to a future of possibilities. They instilled that message so much that it, too, became my goal.

My siblings and I put ourselves through college via scholarships, student loans and part-time jobs. Four of us are CU grads. After graduation I reported the news at TV stations across the country.

My thick Vietnamese accent still followed me. I read out loud, spoke into a tape recorder and even worked with several voice coaches throughout my journalism career to ensure my enunciation was clear when I delivered the news.

That day when Madison and I got home from the Asian grocery store, I pointed to Vietnam on our globe.

She’s still too young to fully grasp how the escape changed the course of my life. One day, I hope Madison will understand and appreciate that she’s connected to a heritage of survivors.