Opening the door to the past 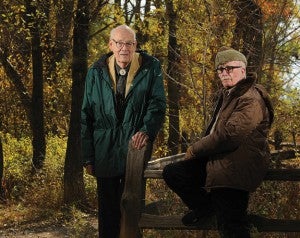 After reading the December 2009 Coloradan and the “Open space” article, which included information about my former art professor Lynn Wolfe (MFA’48), I figured it was about time to let him know how influential he was in my life as a sculptor and thank him for all his insight and direction during sculpture classes leading to my bachelor’s in fine arts in 1962 and a MFA several years later.

While currently sculpting full time in Tucson and planning to move to Maryland, I am focused on packing up my studio “stuff,” as my wife [Bonnie Weber Walvoord (A&S’60)] calls it. During the editing phase of what to take to Maryland, I ran across school records and photos of sculptures I had completed at CU in Lynn’s class and remembered that he asked us to write down what our motivations in sculpture were and he would be interested in knowing if these motivations would remain the same in the future.

Please let Lynn know my motivations are the same and I would appreciate it if he still had my original submission to forward a copy to me. Or better yet, if you could get him to e-mail me I would be delighted to communicate with him personally.

It’s remarkable that people in Boulder still remember the [land preservation] events half a century ago [“Open space,” December 2009 Coloradan].

In retrospect, what we did then has had far wider ramifications for the Boulder community than any of us had anticipated, but only because of the continuing vision and efforts of the many Boulder citizens who, in the years since, have worked to make it happen.

Congratulations to you all.

Thank goodness these visionaries had the courage to identify and act on this need of the community [“Open space,” December 2009 Coloradan]. Open spaces pay dividends for generations.

We were all so excited to see our suggestion for being more “green” [by requesting 10 copies of the Coloradan for our office rather than a magazine for each staff member] become a reality.

I’ve been suggesting this to departments all over campus for well over two years and to see it finally respected just flat-out made my day!

Thank you so much for your willingness to work with us on this idea for how CU can do less lip-service and more actual conservation.

Recycling what we read

Aloha, congratulations on a great December issue! Loved many of the features, especially the piece on Boulder’s greenbelt [“Open space,” pages 58-61]. I saw on page 65 that the Coloradan is printed on paper from mixed sources, but I do not see that it is actually recyclable paper and it appears to be glossy. If it is recyclable paper, it should be noted. If not, can it be changed to recyclable paper?

[Editor’s note: Thanks for reading the fine print, Paul! All Coloradans are recyclable with other magazines. Your letter drew attention to the fact that our sentence at the bottom of our masthead that reads, “Please recycle with magazines” disappeared in the December 2009 edition. We will put this back. Please pass this issue on to a friend or recycle it with other magazines.]

I did not know Stephen Romine (MEdu’40, PhD’47) [A Buff Tribute, December 2009 Coloradan] until a moment ago. I am researching a biographical history of Lawrence (Lawrie) William Shears who met him on Nov. 30, 1960. Lawrie was a Harkness Fellow and in his exploration of teacher education in the United States the two men met. It is important for me to know the influences Stephen and others had on Lawrie and how they were implemented in the Victorian education system. I am sorry to hear of Stephen passing but what a rich life he led and what a wonderful contribution he made through his life in education.

I read about the passing of professor Rozek [June 2009 Coloradan] with great sadness. I did not take any of his courses during my years at CU but met him many times and remember him as the person who helped me and the other Hungarian students adjust to life as American college students.

I escaped from Hungary after the revolution in October 1956 and came to CU as one of the scholarship students in April 1957. I never found out but always felt that professor Rozek was instrumental in establishing these scholarships for our group of Hungarian refugees. He understood what we experienced growing up during the communist regime and our appreciation for living as free people in the United States.