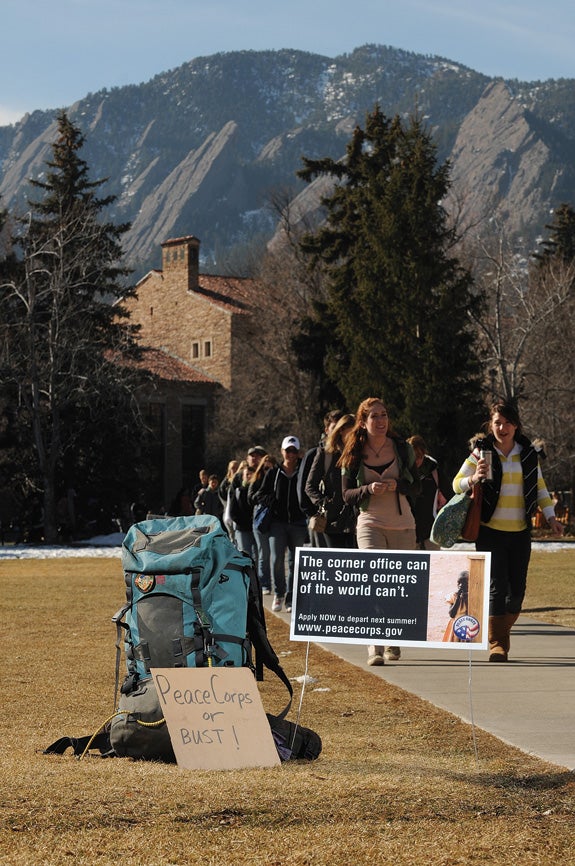 On Oct.14, 1960, on the steps of the University of Michigan student union, a young senator named John F. Kennedy made history when he challenged students to spend two years of their lives working for peace in developing countries.

In the 50 years since Kennedy’s speech, the Peace Corps has sent hundreds of thousands of volunteers across the globe in its mission to fulfill his grassroots quest for world peace. Serving for two-year stints, volunteers work on everything from AIDS education to information technology and environmental preservation. In the process, they gain the intangible yet invaluable life experience and cultural understanding that come with living and learning from people different from themselves.

This year, CU-Boulder is ranked No. 2 in the nation among large schools producing Peace Corps volunteers. The next four pages feature alums who answered Kennedy’s call to make a difference in various pockets of the world. While their post-Peace Corps paths have meandered in different directions, the overarching theme among their stories is clear — the experience of living and volunteering abroad stayed with them long after they set foot back home. 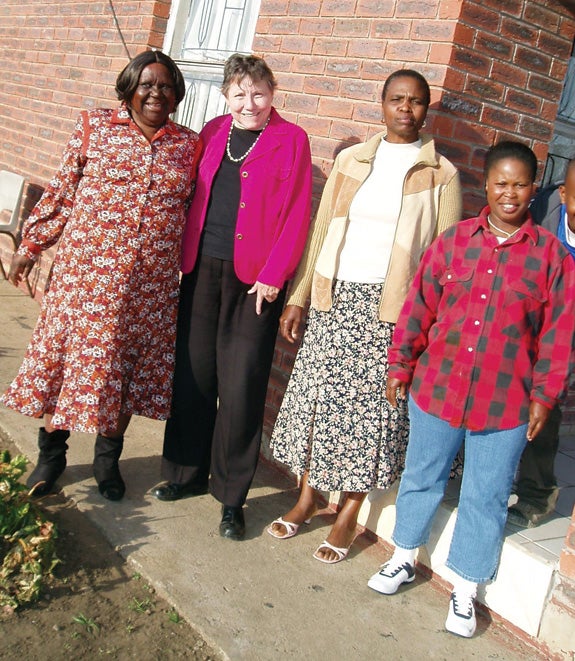 Daisy Schultz Jackson (Bus’55), second from left, stands with her former Peace Corps co-workers at the Farmers Training Center in Mohale’s Hoek, Lesotho. This photo was taken when she returned to the country in 2007.

During the last 10 years, Daisy Schultz Jackson (Bus’55) has jetted overseas almost more times than she can count. Trinidad, Uganda, South Africa, Nigeria, Ethiopia, Botswana — the list never seems to end. And the 77-year-old is hardly slowing down. As an office manager for the U.S. Foreign Service working on a short-term contract basis, Jackson bounces from country to country, filling temporary positions wherever she is needed.

After holding a position with the Foreign Service for 22 years, the Peace Corps was a way for Jackson to fulfill her yearning to travel after retiring.

“The experiences gave my life another dimension,” Jackson says of her service in Lesotho. But instead of satisfying her craving to live overseas, the Peace Corps reignited it and spurred her return to the temporary position with the Foreign Service that she holds.

Ten years after returning home to Colorado Springs from Lesotho, Jackson is writing a book to gather her thoughts about the Peace Corps experience. The title is based on a traditional Lesotho saying, one that rang true for Jackson through every day of her service: Anyone who is a mother is a teacher. 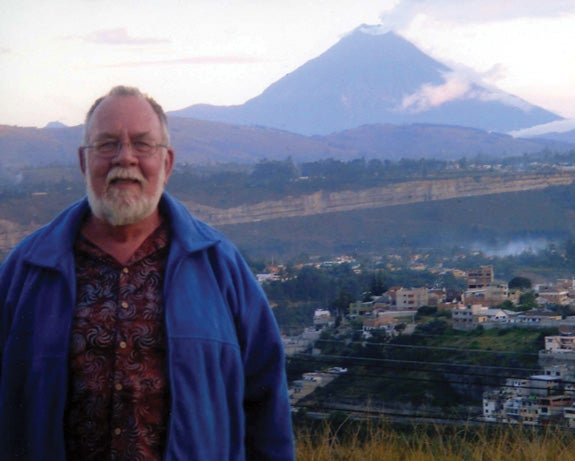 Tungurahua, an active volcano, towers above the town of Ambato in central Ecuador, one of the many countries John Roberts (IntlAf’64) visited after his years with the Peace Corps.

In teaching continuing education classes at Colorado State University, John Roberts (IntlAf’64) chooses one country to cover in-depth for the entire semester. While preparing for the class could be a daunting task, Roberts simply scans through his own experiences.

His first venture overseas was with the Peace Corps in Somalia. Afterwards, he joined the U.S. State Department for 34 years, racking up visits to 186 countries. He helped resettle war refugees in Vietnam, supervised rural development projects in Indonesia and oversaw spending of U.S. aid in Egypt following the Camp David Accords. After retiring, Roberts served as Peace Corps country director in Tunisia, Malta and the Solomon Islands.

The Fort Collins resident’s next goal is to pay homage to the organization. He envisions a museum and learning center based around the third goal of the Peace Corps: promoting a greater understanding of other people among Americans.

“If I tell the stories behind this stuff,” Roberts says, “I can show how small the world is and also how big the world is, sharing with people what the world is really like.” 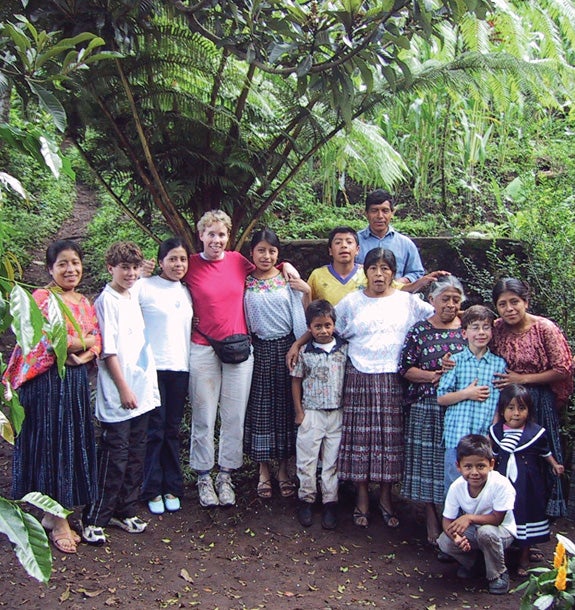 Leslie Boyhan (DistSt’86), fourth from left, returned to Guatemala with her husband and two sons in 2005. She stands surrounded by members of her host community.

Leslie Boyhan (DistSt’86) always knew she wanted to go into nursing, but she says she never would have arrived where she is today without her Peace Corps experience. She is the nurse for the Teen Parenting Program at Fairview High School in Boulder.

“Being in the Peace Corps opened up doors to the health department and the community health center that I never would have had otherwise,” Boyhan says.

After two years of service with the Peace Corps in Guatemala, Boyhan pursued nursing school and then a position at the University of Colorado Hospital before joining the Boulder County Health Department’s Community Infant Project. Her Spanish language skills led her to Clinica Campesina in Lafayette, Colo.  She describes her job at Fairview as part community health, part social work as she helps pregnant and parenting teens with everything from prenatal care to breastfeeding to health-care planning.  Many of the teens she works with are minorities, and Boyhan says her Peace Corps experience has given her the skills to navigate cross-cultural boundaries and connect with her clients.

“I think that I’m much more able to meet people where they are and appreciate what their values are,” Boyhan says. “At least that is my hope.” 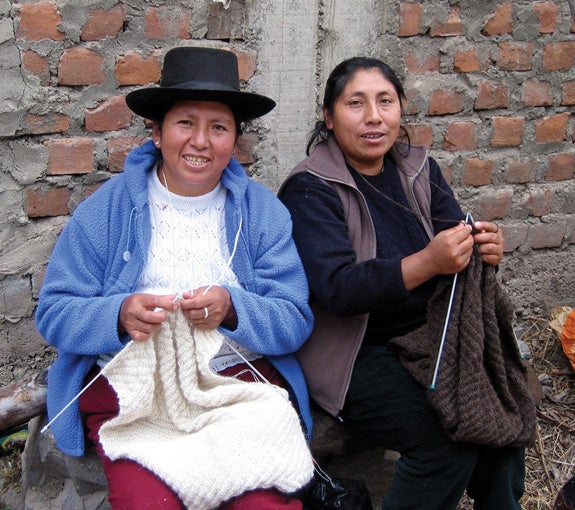 In a small Peruvian village ringed by the Andes, Kate Robertson (Mgmt’03) started her Peace Corps service making cheese with the locals. But where she ended up — working with a group of Peruvian women to start a knitting business — made her volunteer experience extraordinary.

About halfway through her Peace Corps service, Robertson discovered the town’s female knitting group. After her mom visited and took home an alpaca wool scarf knitted by one of the women, Robertson received requests for similar items. It was then she decided to start a business to help the women get access to a larger market and much-needed income. 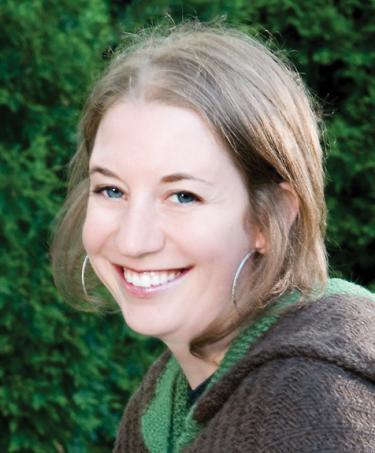 Mayu, a hand-knit alpaca clothing company, is in its third year. The online business is a way for her to stay connected to her Peruvian community.

“The place where I was and the people who I encountered were too good to just leave,” she says.

Post-Peace Corps, Robertson worked at a refugee resettlement agency and then traveled to Colombia last June with an organization to help artisans escape poverty. She is pursuing a master’s degree in international development at Thunderbird School of Global Management in Arizona.

“If it weren’t for Peace Corps,” she says, “I would probably be working in some corporate office because my dad told me to.” 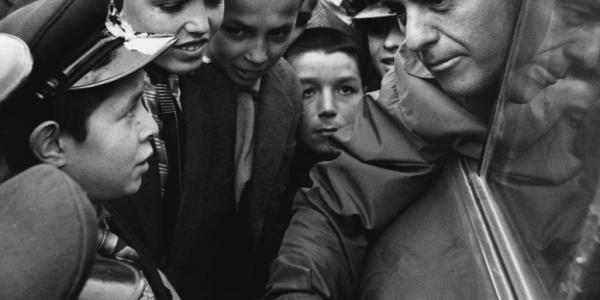 Since the founding of the Peace Corps in 1961, more than 230,000 CU Boulder alumni have served abroad. END_OF_DOCUMENT_TOKEN_TO_BE_REPLACED

While traveling the world to understand everything there is to know about caffeine, Murray Carpenter uncovers some shocking surprises. END_OF_DOCUMENT_TOKEN_TO_BE_REPLACED

CU astronomer Doug Duncan has some advice about this summer's total eclipse: Don't miss it. END_OF_DOCUMENT_TOKEN_TO_BE_REPLACED