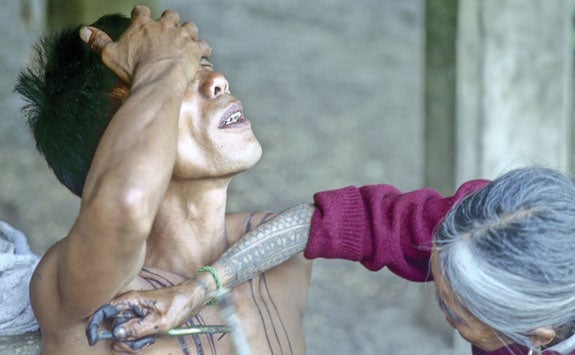 Ninety-year-old Whang Od of the village of Buscalan in the Philippines hammers her orange thorn tool on a Kalinga man’s chest. She is the last Kalinga mambabatok, or tattoo artist, working today.

Lars Krutak (Anth, Art’93) knows about ritual pain. The 38-year-old anthropologist has dozens of tattoos and decorative scars given to him by the tribal people he studies in such far-flung places as Hawaii, the Philippines and Indonesia. Native artists have used a variety of objects to pierce his flesh — hippo teeth, tree thorns and nails.

He nearly reached his limit during the skin-cutting ritual of the Kaningara of Papua New Guinea as he lay on a bed of banana leaves while a master “cutter” made more than 450 marks on his chest.

That day he became a celebrity among the Kaningaras, the first outsider to participate in their timeworn ritual to initiate young men into manhood.

And his fame was about to spread, since the ritual was captured on film for Discovery Channel’s Tattoo Hunter, which starred Krutak and ran this past spring and summer. During the show Krutak introduced native tattooing and scarification to an audience who — despite the popularity of tattoos among Westerners — was largely oblivious to them.

“I was able to give a voice to people I don’t think anyone would have heard otherwise,” Krutak says. “They’re endangered people and their stories are really touching.”

Those stories center around traditions that seem, at first glance, to have little in common with modern tattooing. Indigenous tattoo artists, for instance, are unlikely to use the electric tools and synthetic inks found in American tattoo parlors. Instead they may hand-tap ink or substances such as tree resin or soot into the skin using a sharpened stick, thorn or, as with the Kaningara, eschew ink altogether and make cuts that heal into decorative scars. 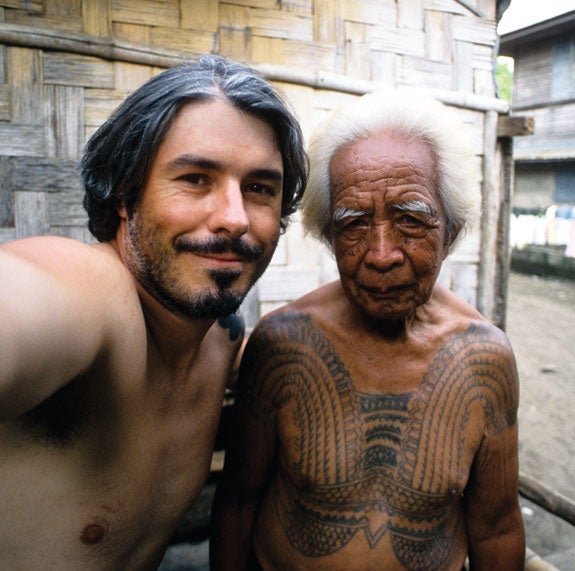 Jaime Alos, one of the last tattooed warriors of the Dananao Kalinga in the Phillipines, poses with Lars Krutak (Anth, Art’93). The designs in the center of his chest, bridging the sternum, are believed to “block the pathway” of his enemies. The marks arching outwards above his navel are the horns of the carabao — a symbol for a war leader. The “V” connecting the horns symbolizes “victory,” he told Krutak.

And while both natives and Westerners may obtain tattoos for spiritual reasons, indigenous wearers tend to have more complex connections to their markings, which can signal tribal affiliation, status and accomplishments. Among the Phillipines’s Kalinga, for instance, chest tattoos delineate the fiercest warriors. For Africa’s Bétamarribé, facial scars illustrate tribal membership.

Krutak’s fascination with indigenous body markings stems from an appreciation for their beauty — healed-over wounds from the Kaningara’s skin-cutting, for instance, depict the head of a crocodile right down to the reptile’s skin texture — and a fascination with the rituals that give them meaning. Kaningara men spend two months in seclusion beforehand. “These are personal acts of transformation that have to be felt to be understood,” he says.

The son of a university professor and museum researcher, Krutak learned to value other cultures and their artifacts at a young age. At CU, he found two strong mentors among the faculty: professor emeritus John Rohner, who gave him an internship at CU’s natural history museum, and fine arts professor emeritus Ron Bernier.

“After I graduated from CU,” Krutak recalls, “I knew I would eventually find a way to bridge my love of art history, anthropology and museology.”

What he didn’t know was that tattoos would be the bridge. That piece of the puzzle revealed itself soon after Krutak enrolled in a master’s degree program in anthropology at the University of Alaska at Fairbanks in 1996. One day, he caught a glimpse of a native woman with three “chin-stripe” tattoos, which eventually led to a research project on the tattooing traditions of the St. Lawrence Island Yupik people.

“No one in perhaps 100 years had written much about the vanishing art of tattooing on St. Lawrence Island [off the west coast of central Alaska] or in the Arctic itself,” he says. “Before I knew it, I was interviewing 10 90-year-old-plus women who were the last gatekeepers of an ancient tradition.”

The women, who believed their tattoos gave them a connection to the afterlife, knew their customs were dying and found solace in the fact their traditions would be preserved in the work of the young graduate student.

Krutak finished his master’s degree and spent several years as a researcher at two museums. But then Yupik elders began passing away, and he realized the same pressures that killed their traditions — globalization that led young people to work in big cities, medical advances that overtook beliefs in the physical protection of tattoos and missionary work that altered spiritual values — threatened tattooing rituals around the world. Krutak quit his job and began traveling, recording as many traditions as he could while they still existed.

That mission got easier when he landed the role on Tattoo Hunter in 2006, allowing him to visit far more places in one year than he might have in a lifetime. Krutak skirted the edges of war-torn Ethiopia, Kosovo and Myanmar and went deep into the jungles of the Amazon. Often tribal elders wanted him to prove himself just as any young initiate would before they allowed him to wear their tattoos.

Nowhere was this more important than among the Watermen of Hawaii, profiled in the show’s ninth episode, who asked him to become proficient in activities they learned as youths. So Krutak worked on his surfing, killed a wild boar and jumped off a cliff into the ocean. At the end of the show, one of the Watermen hugged Krutak, declaring, “You’re one of us now.”

These days, Krutak, who earned his doctorate from Arizona State University in August, is happy to be back home in Washington, D.C., with his wife and baby daughter. He looks back fondly on his travels, wears his body markings proudly and says he’s ready to settle down — though he probably could be talked into getting one more design, a skin-stitched tattoo that involves a needle and thread and was once performed by Inuits across the Arctic.

“That would really bring things full circle,” he says, “since Alaska is where this all began for me.”

For more information on Lars Krutak, please visit his website at www.larskrutak.com. 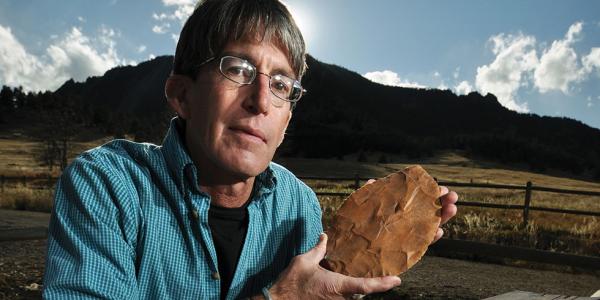 Smarter Than You Think

While traveling the world to understand everything there is to know about caffeine, Murray Carpenter uncovers some shocking surprises. END_OF_DOCUMENT_TOKEN_TO_BE_REPLACED