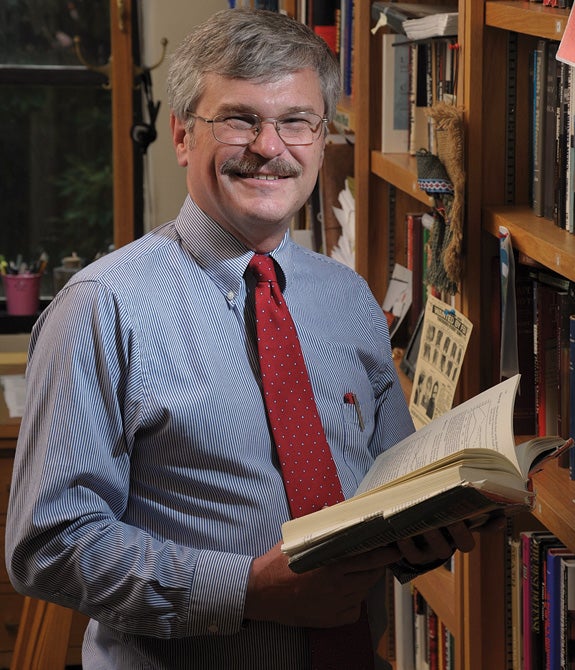 Walking the line between life and death

There are courses you just take and pass and courses that actually teach you something. Some even compel you to completely change.

I was a student in professor Michael Radelet’s criminology course in 2001. I walked into his class with a pro-death-penalty stance, although I had never really questioned why. Professor Radelet never asked me to agree that the death penalty should be abolished — he taught me why it should.

There are a handful of professors and courses that I still remember. But professor Radelet changed my life forever. Not only do I oppose the death penalty (how could I continue to support a system that doesn’t deter crime, is arbitrary, puts innocent people to death, is more of a burden on taxpayers and completes the vicious cycle of killing?), I find my mind is more open to other viewpoints. If my belief system could be challenged and changed on one topic, then I must remain open to the possibility of change on other ideas.

Thank you for writing about such an important person in my life! I’m grateful he’s still making such an impact at CU.

I read with disbelief your story [September 2009 Coloradan] about discontinuing the Silver & Gold Record after “almost 40 years.” I was on the Silver & Gold staff in 1945 and ’46 when Les “Laz” Perlmutter (DistSt’48) was editor. That was over 60 years ago.

I had the same experience a few years ago when a date was mentioned for starting the Shakespeare Festival in the amphitheater. I don’t remember the year mentioned, but it was similarly “recent.” When I complained that there was a Shakespeare Festival in the summer of 1945 producing The Merchant of Venice, I was told it didn’t count because it wasn’t sponsored by the same current sponsorship.

How can actual history be discarded and ignored because of some difference in sponsorship that no one knows about anyway? There was a Silver & Gold newspaper and there was a Shakespeare Festival in 1945 and 1946 and denying it doesn’t change the fact.

It was with great sadness that I read the tribute article on the passing of professor Edward Rozek as I had the distinct and memorable pleasure of not only knowing him well but working under him as he was my graduate thesis adviser. His courses were outstanding learning experiences because he added a personal aspect to almost every topic based on his own life and strong personal convictions.

Many on campus during those turbulent ’60s frequently protested outside his office, but I knew they were misguided because Rozek was not the man they thought he was. He would have fought for their right to differ. It was difficult, as now, to be a conservative professor at CU and Rozek was always proud to defend his positions with intellectual honesty, which he did on numerous occasions.

My thesis examined the communist takeover of Eastern European satellite countries after World War II using democratic means such as elections with Hungary as a case study. Former Hungarian Premier Ferenc Nagy read my final draft as he was Rozek’s friend and visited him in Boulder. I mention this only because Rozek was internationally distinguished and well-respected.

His influence on my intellectual development was profound and provided a firm foundation upon which I built a successful career in international banking in New York, London and Dallas. He imparted to me and other students over the years the immeasurable gift of demanding the best of yourself and appreciation for the freedoms and opportunities of living in these United States of America.

I just received my September 2009 alumni magazine in the mail. Happy to open and read it as always, the first thing I read was that the Susannah Chase murder that took place while I attended CU has been solved. I sat down and read it twice and honestly started to cry. I remember the incident and want to thank you for letting us know her murderer has been caught and convicted. I honestly have wondered about it through the years (whenever someone mentions the Jon Benet Ramsey case I would think, “What about that other girl?”).

And I’m happy to know the Boulder police collected and maintained the evidence needed and then patiently yet diligently kept working to solve this case. I am a forensic anthropologist teaching at San Diego State University, and I plan on sharing this story with my class next week.

The article about soprano Cynthia Lawrence (MMus’87) in the June 2009 issue brought back a very pleasant memory. In 1990 we were on a tour called “Mozart’s Europe,” attending music events in Prague, Budapest, Vienna, Munich and Salzburg. One of the highlights was attending a singing competition for young singers from around the world at the famed Staatsoper in Vienna, Austria. We were thrilled when the announcer named the winner of this competition and mentioned that she had attended the University of Colorado. The winner was, of course, Cynthia Lawrence.

The most recent [Buffalum Notes e-newsletter] had me responding, “WE’RE NUMBER ONE; WE’RE NUMBER ONE [see page 14 in this issue].” It is gratifying to see CU was chosen by Sierra Club magazine for actively doing something about making a greener world. For me, this is even more important than the Buffs making the top 25 in NCAA football, much as I would like to see that ranking.

I thought of my family’s green journey, which started shortly after I changed careers from petroleum geology to teaching geology at Elbert Covell College, the Spanish-speaking division of the University of the Pacific in Stockton, Calif. The college featured an experiment wherein Latin American students could enter the U.S. higher education system. Half of our students came from strong four-year Spanish high school programs. The education took place in the classrooms, dining hall and dormitories.

Interestingly enough, CU-Boulder is installing residential colleges, which seem to parallel our Covell program. I hope that activities promoting cultural understanding as well as language learning will be a strong focus. Buena suerte.

Thanks so much for sending the Coloradan. I have just started receiving it and really appreciate all the information you put forth. I graduated in ’57 and have lost touch with most of my friends from those days, so you can imagine how much the news of the campus and what is happening at CU means to me.

At this point in my life I appreciate more than ever the wonderful days I spent at CU. Thanks again for putting out this form of communication.

While CU-Boulder researchers concluded that remains found in Utah were those of Southwest artist and poet Everett Ruess, they were proved incorrect. Another analysis revealed the remains may be Native American.