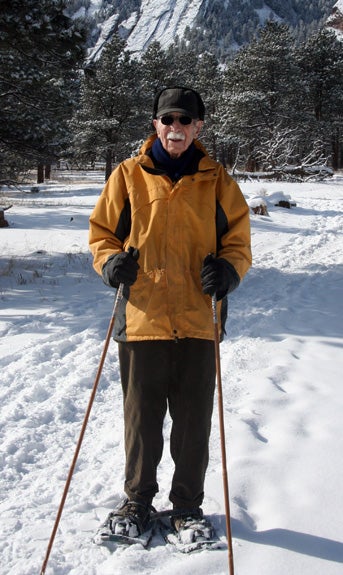 As far as Stephen Romine (MEdu’40, PhD’47) was concerned, the legend at the bottom of the trail map was never to scale.

In the backcountry, Romine could name each flower and recite the geological history of nearly every rock. Back in Boulder, he infused the CU campus and community with the same wide-eyed wonder he found in the wilderness, stretching each year of life as he did each mile on the trail — just a little bit further.

His educational career began as a high school teacher and administrator in Oklahoma and Colorado. After serving as a U.S. Army captain in North Africa during World War II, Romine earned a CU doctorate in education, which at the time was a department in the College of Arts and Sciences. Later, as dean of the department, Romine led the effort that created the separate education school.

In his 29-year CU career, Romine reached out to his graduate students, inviting them to his family home for informal class sessions and made faculty feel welcome by hosting summer parties. In 1970 he received CU’s Robert L. Stearns Award for extraordinary service.

Still, education professor emeritus Jack Cousins also remembers Romine for his explorations out of the office — where, at times, the dean was called to treacherous peaks to provide aid as a member of the Rocky Mountain Rescue Group.

“Steve was noted as an outdoor snow camper,” Cousins says. “He would dig a snow camp in four feet of snow on a mountaintop and just think that was an ordinary thing.”

After retirement, Romine moved to Steamboat Springs, Colo., to continue teaching — this time in the snow as a cross-country skiing instructor. Even after the death of Marguerite Romine, his wife of 68 years, he continued prowling the mountain passes, leaving not only footprints but lessons.

“When we were camping as a family, we might come to a campsite where someone had left some trash and he would say, ‘You clean it up,’ ” his daughter remembers. “And I remember saying, ‘That stuff was here when we came’ and he would say, ‘No, you leave the campsite better than you found it.’ And I think that was his philosophy about life — leave it better than you found it.”

Jim Sheeler (MJour’07) is a Pulitzer Prize-winning writer who teaches at the journalism school.