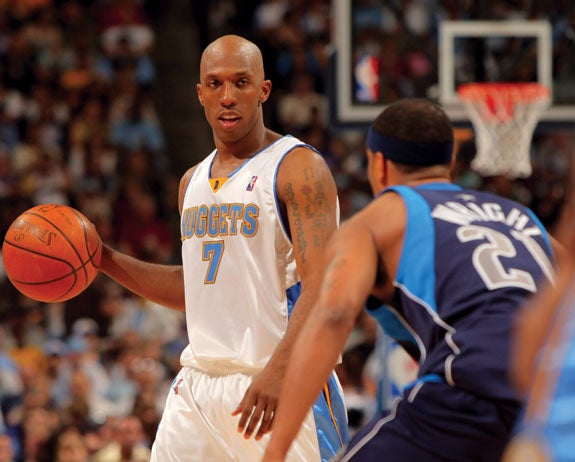 After a trade last year brought Chauncey Billups (Soc ex’99) back to his hometown of Denver to play for the Nuggets, the team won its first playoff series in 15 years. Courtesy of the Denver Nuggets.

Nowhere is this better illustrated than at the Coors Events Center where, in the arena’s southeast corner, a 68-foot-by-26-foot mural features Billups and CU’s buffalo mascot, Ralphie.

So how does it feel when the former Buff basketball standout sits across from a huge painted likeness of himself while attending CU hoops games?

“It’s a little weird, man,” Billups said on his 33rd birthday early this fall. But noting the reason for the mural — the “Chauncey’s Kids Roundup” program that provides tickets for youngsters to attend CU basketball games — Billups added, “Letting kids from the inner city and the area get the college experience, that’s great.” Billups helped launch the initiative with a $100,000 donation.

Billups was a big shot when he attended CU from 1995 to ’97, leading the Buffs to their first NCAA tournament appearance in 28 years, plus a first-round victory over Bobby Knight’s Indiana team. But it was in Detroit during the new millennium — after playing for four other NBA teams, including the Denver Nuggets — when Billups became “Mr. Big Shot.” Winning an NBA title with the Pistons in 2004 and being named the NBA Finals most valuable player — his championship ring is inscribed “Billups The Right Way” — helped reinforce his stature in the game.

After a trade last year brought him back to his hometown of Denver, the Nuggets won their first playoff series in 15 years. While there’s never a single reason for a team’s transformation, few people underestimate Billups’ strong leadership skills to help change the team’s culture and rate of successes on the court, including getting within two wins of their first NBA Finals.

Having a ball at home

Whether he’s taking aside young teammate J.R. Smith during a game to advise him, making sure no cancerous attitudes creep into the locker room, challenging his fellow players or going to bat for his team when officials make lousy calls, Billups is there, pushing the right buttons. He even helps enforce an unwritten dress code among the players.

As Nuggets coach George Karl said at one point last season, “Did we know he’d be this good for us? No. He’s a gift from the basketball gods.”

Given the Pepsi Center, the home of the Nuggets, is a little more than five miles from where Billups grew up, the man known as “Smooth” and “The King of Park Hill” is living large these days.

The Denver native was a basketball phenomenon as a youngster in the city’s Park Hill neighborhood. In fact, he was in fifth grade when former Nuggets player Bobby Wilkerson first deemed him “Smooth,” a nickname that stuck to the point it’s now a tattoo on Billups’ arm.

“Being close to all the people that kind of raised me and watched me grow up through the years has been a blast — just a blast,” Billups said at the beginning of training camp for the 2009-10 NBA season.

But while growing up, Billups had to withstand the pressures many inner-city kids face — most notably the influence exerted by street gangs — a fact of life that would leave some in Chauncey’s neighborhood in jail or dead.

During an off-season visit to the Porter-Billups Leadership Academy — where Billups and basketball coach Lonnie Porter, a longtime friend, provide life-skills guidance for low-income kids — Chauncey touched on what he and other inner-city youngsters have faced.

“I remember being [one of] these kids,” he told the Denver Post, “growing up in the inner city and having to worry about the gang activity and my gang friends and all the things that you deal with growing up in the neighborhood. You really don’t have much. You don’t have much going on. You go to school and you don’t have all the clothes everybody else is wearing. The pressures of dealing with that, the pressures of being a follower — I remember all of that.”

Billups says he succeeded mainly because of the guidance of his parents, Ray and Faye Billups. To this day Billups maintains close connections to many people in his old neighborhood. And he married his high school sweetheart at George Washington High School, Piper. The couple has three daughters.

Chauncey Billups (Soc ex’99), former CU basketball standout, was presented with his jersey on Feb. 19, 2005, during the Texas A&M game for his outstanding CU career. 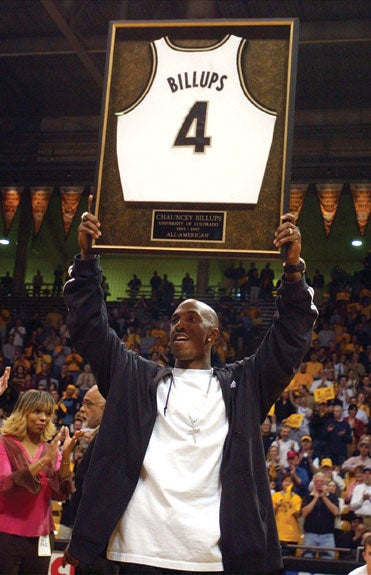 Chauncey Billups (Soc ex’99), former CU basketball standout, was presented with his jersey on Feb. 19, 2005, during the Texas A&M game for his outstanding CU career.

Both on and off the court, Billups has proven himself a leader. By just about every standard, he leads by example, making those around him better in the process. It’s no wonder why he won the NBA’s sportsmanship award last season.

Billups “is what our game is supposed to be about,” says Larry Brown, the former Nuggets coach who led the Pistons to the 2004 NBA championship. “He’s the ultimate pro, the ultimate team guy.”

It’s no coincidence he has played in the NBA conference finals each of the last seven years. Just as the Nuggets began the 2008-09 season, they acquired Billups in a trade that sent Allen Iverson to Detroit.

The Nuggets’ 54-28 record in ’08-09 tied the most regular-season NBA wins in franchise history. And in taking the Los Angeles Lakers to a sixth game in the Western Conference Finals, Denver matched its deepest playoff run since joining the league in 1976. It was the Nuggets’ first conference finals in 24 years.

Billups earned a spot on the NBA All-Star team for the fourth straight year in 2009. Overall for his first dozen seasons in the NBA, he averaged 15.1 points and 5.6 assists. Not surprisingly, he’s been even better in his 133 playoff games, with norms of 17.7 points and 5.9 assists. And he’s showing no signs of slowing down.

“I think I have a lot left in the tank,” he says. “My game is not speed, jumping and dunking. My game is outsmarting people and precision and efficiency. Those are things you don’t lose with age. At some point I’m not going to be able to do what I do. But I think that’s more than five years from now.”

Having what it takes 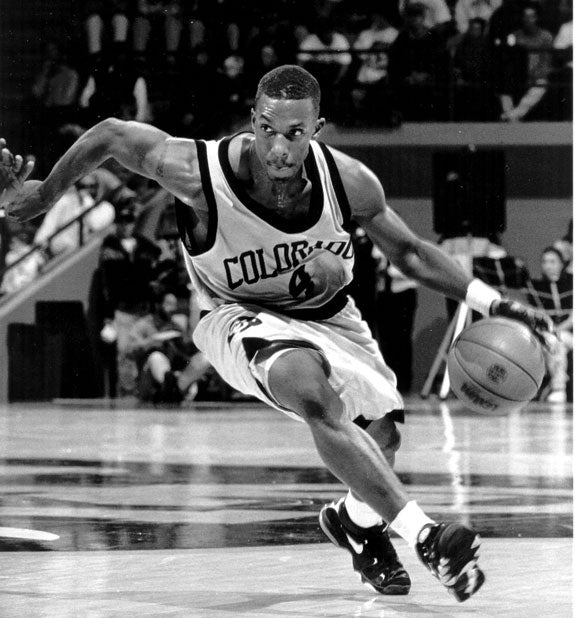 Billups, who went to the NBA Finals in 2004 and 2005, has mixed feelings about last season, noting he feels the team was four or five plays away from winning the series against the Lakers.

“But once you have time to sit back and reflect, we had a great, great season, a phenomenal season,” he says. “I think we changed the culture among the guys [the players]. We raised the bar. We expect to win. We expect to be an elite team. But it just doesn’t happen. You have to put the work in.”

As for taking the next step this season, Billups believes he knows the right formula for the Nuggets, albeit not an easy one.

“The next step is a lot harder because it’s not a physical step you can take,” he says. “It’s a mental thing. We have to be locked in every single night — even nights when we don’t have it. We’ve still got to find a way to muster up wins on those nights, which great teams do . . .”

While Billups derives great joy from being in his hometown on a team that has NBA title potential, he also enjoys having more interaction with the basketball program he gave a spark to in the mid-1990s.

“I’ve done a lot of CU events I wasn’t able to do when I wasn’t here,” he says. “And I have the opportunity to see some games [with his wife and daughters]. That’s one of my joys.”

Although the Buffs have struggled on the court in recent years, Billups is cautiously optimistic they’ll turn the corner.

“The key is always recruiting,” he says. “You’ve got to get the players. No matter how good the coach is, you have to have somebody who can execute the plan. But it’s headed in the right direction. ‘Buzz’ (Jeff Bzdelik) is one of the best coaches in college out there right now. You just have to get the talent in there — that’s all.”