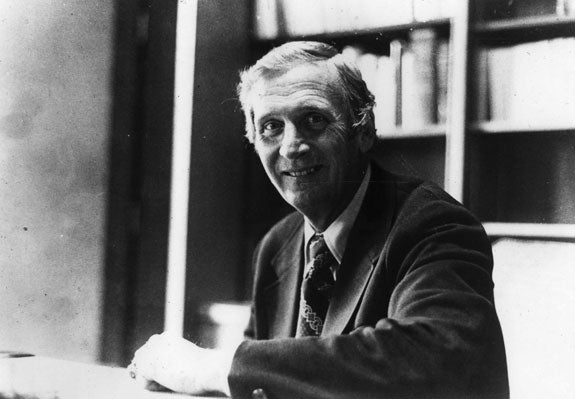 Back in the ’70s I worked for a couple of years as speechwriter for Roland Rautenstraus (CivEngr’46, MS’49) (universally called “Raut” by his friends), the 12th president of the university (1974-1980). When he wanted to talk over a speech, I would go down to his office and sit in front of his desk.

Behind his chair, with a bunch of posters, was a mounted, 3-foot-wide full-color photograph of the cockpit and instrument panel of a plane in flight, taken from behind the pilot’s and co-pilot’s seats, which were empty. It was kind of eerie. Raut, who had one of the sweetest dispositions, never said a word about it. He was a very private guy.

Now for the rest of the story.

I first heard the tale from former football coach and athletic director Eddie Crowder, who told it at a reception when Raut retired from teaching in 1993.

Two years after Raut enrolled at CU, he was called to active duty and stationed with the Navy on Okinawa. As Crowder told the story, one day Raut’s unit was ordered to load a spool of electrical cable onto a transport plane and accompany it over to another island. The plane had an outsized cargo hatch but lacked civilian frills like a hatch door.

Accounts differ on exactly what happened, but in the course of wrestling with the spool, Raut fell out of the cargo hatch.

Fortunately, he was tethered by a safety harness, which saved his life, but he spent 15 to 20 minutes flopping outside the plane until the crew could pull him back in.

Then the plane made an emergency landing in the surf while returning to Okinawa.

This isn’t the sort of experience that turns one into a frequent flier.

Raut returned to Boulder and walked into the civil engineering department office in 1946. The place was overrun with vets starting school under the G.I. Bill. Raut’s faculty adviser, professor Warren Raeder, looking as harassed as the cargo master on Omaha Beach, exclaimed, “Thank God, you’re here! You’ll be teaching two sections of intro.”

So began a 47-year academic career (and love affair) with CU, of which the presidency was just one episode. Raut’s main work was turning earnest young geeks into hairy-eared engineers (a technical term), a calling he continued for 13 years after leaving the president’s office.

For 30 years after returning to Boulder Raut refused to set foot in a plane.

Eventually, the regents told him (in so many words), “Modern university presidents fly. You need to get over the no-fly thing.”

Raut called up old friend Robert Six, who founded Continental Airlines, and asked him if he had any ideas.

“We can handle it,” Six said. “Come down to the airport for lunch.”

It was a champagne lunch. Champagne flowed like Rocky Mountain spring water.

As Raut was about to pass out, his lunch pals poured him into a seat on a waiting jetliner. An hour later, he woke up in the air headed toward Omaha.

His inner geek and sense of humor kicked in. By the end of the flight they had him in the co-pilot’s seat.

Raut died at a family Christmas dinner in 1997.  I like to think his last journey was a champagne flight.