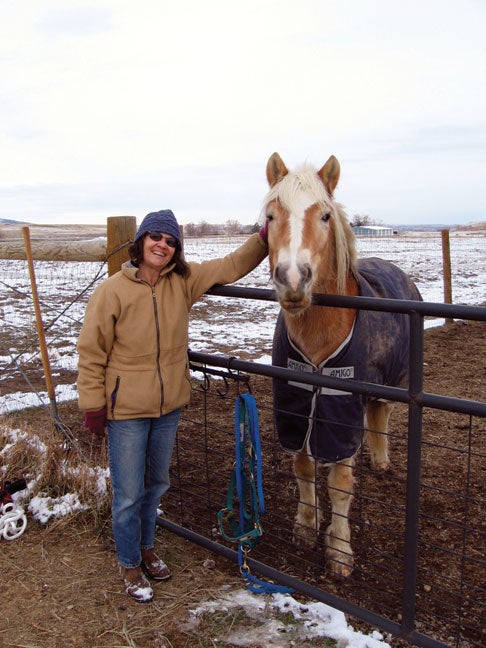 As her sister lay in bed with lung cancer, Mary Ryan took a minute to look out the window at the rolling fields, horses and sky. Then she heard the whisper of her sister’s voice.

“What are you thinking about?” Carol Eileen Ryan (Psych’65), a doctor, asked from her bed.

At that point, the doctor-turned-patient was so weak that her younger sister thought she would only use her strength to ask for something crucial — a drink of water, adjustment of a pillow.

“Instead, it was always something about you,” Mary Ryan says. “She always wanted to know about you.”

Two weeks before Carol died, she still wanted to listen.

After nearly 30 years of treating students as a psychiatrist at the Wardenburg Student Health Center, Ryan died at home in Longmont on May 28. She was 65.

As a girl, she wanted to be a veterinarian and carried that love of animals with her even as she focused on helping people. After earning her M.D., she worked briefly as a pediatrician before switching to psychiatry. She completed her residency at Wardenburg where she was hired in 1980.

During the next 29 years, she navigated emotional and bureaucratic minefields as director of the psychiatry clinic. She was known for fighting for students and keeping up with medical advances, simultaneously battling budget cuts and insurance issues — all while maintaining her own private practice.

“She was a very youthful person — youthful in that she still had curiosity,” says Jane Bliss Stoyva, a former social worker at Wardenburg and one of Ryan’s good friends.

“She didn’t judge kids — she was primarily interested in getting to know them,” Stoyva says. “She could hear them. She was not an um-hummer.”

Away from the clinic, she focused on life’s details with equal intensity — skiing, horseback riding or reading all night. “She would swim forever,” recalls her husband, Clive Jones.

After being diagnosed with terminal cancer in August 2008, she maintained a similar steadiness. Before her death, she wrote a note to her family — her husband, two sons and five siblings — not asking how they were, but, for once, telling them how she felt after listening all her life.

“There was never enough time for all the things I hoped to do, now or ‘someday,’ and some always waited for ‘someday’ because the days were so full of all the others . . . When asked about future changes, I’d say, ‘Not yet . . . I’m still enjoying it all too much . . . Right now being ‘present’ as much as I can be with those I love is what is most important. It feels to me more like making a choice than throwing in the towel. I can enjoy the east sky lightening, the pastoral scene, the light fading as the day goes on.’”