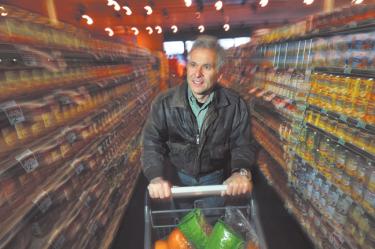 Reading the article about professor Donnie Lichtenstein really brought back some fond memories of CU classes [March 2009 Coloradan]. I took a class from Donnie in fall 1990 and even back then his favorite quote was “It’s chic to be cheap.” He even brought in his receipt from a grocery store trip to show how much he was able to save.

If memory serves, I didn’t get a very good grade in that class — too many football victory game parties and not enough studying.

The great articles of your publication really help me stay connected to CU and make that lifetime membership worth every penny. Keep up the great work.

Thank you for your article in the March 2009 Coloradan [“You’re not in Colorado anymore”] by Nancy Rasmussen (Engl’67). Nancy moved to Philly after spending a large chunk of life in Colorado, and I was happy to read about her subsequent transition. I, too, ripped myself away from my beloved Colorado, where I grew up in Colorado Springs, attended CU-Boulder and spent time working in Breckenridge and Denver until 2006 when I took a job in Chicago.

What a difference. Adjusting to the huge changes of being in a big city like Chicago was difficult. But in time I began to adapt and learn to enjoy a different kind of life. I still love and miss Colorado every day, but reading the article from Nancy made me feel like I’m not alone out there in a world where Buffs are on the move. I love it here now, but I am a Colorado Buffalo through-and-through.

Teetering on the edge

Congratulations to Matt Nager (Jour’05) for his photograph [Pages 70-71 of the March 2009 Coloradan] of the young girl in the La Chureca garbage dump in Managua, Nicaragua. For the last three years, my wife and I have been assisting with several humanitarian projects in Nicaragua. I’ve visited La Chureca a number of times. It is truly one of the most horrible places on earth.

I hope bringing attention to this grotesque situation will encourage more people to join the many other Americans working to improve conditions in Nicaragua.

I really like the Coloradan and its range of coverage. The article on Lelia Hinkley (A&S’15) [“China exhibit features revolution” on Page 56] in the March 2009 edition brought back especially warm memories of my time as a graduate student. Although I was very busy as a young student and parent, I often met with a Great Decisions foreign policy discussion group at Lelia’s home once a month. I ended up working overseas quite a bit in my own career while I was a psychology professor at Colorado State for 40 years.

She truly was a positive example, and I feel she was one of the saints I have known. Lelia was a credit to our country and to CU and I miss her.

From soldier to student

I would like to congratulate and thank you for your coverage of the Marines (and, by the way, that soldier) in the March 2009 Coloradan [“From soldier to student” Pages 8-13].

I was commissioned in the regular Marine Corps through the NROTC program at CU in 1956. The military was held in high regard at that time.

As you well know, there was a time a few years later when that was not the case and, if any of us had visited campus, we would have had to employ camouflage and clandestine movement tactics in order to avoid severe harassment or even personal attacks.

It is a great pleasure to see the world has changed for the better, and the young men and women who serve our country are recognized as the fine people they are.

Thank you for your article [“From soldier to student”] in the March 2009 Coloradan. I know the feeling of wanting the public to know about the good things the military is doing overseas beyond Iraq and Afghanistan.

I attended CU in the late ’80s during the UMC “shantytown” protests and demonstrations at ROTC offices. While I never had a bad experience, even while going to class in uniform, I had several friends who did. The intolerance was surprising, especially coming from groups that claimed they were striving for world peace and tolerance. We took these to be limited incidents by a minority group that did not represent the whole. This is the way we should view the actions of the Taliban and other jihadists versus the Muslim population as a whole.

I started reading the March 2009 Coloradan when I was just waking up one Monday morning. The first two articles really hit home. “Shopping with Donnie” was a powerful reminder of how unintentional my food shopping tends to be and “From soldier to student” gave me a heart connection to these brave students.

After I read Mr. Danish’s article about “CU’s most infamous alum,” my excitement shifted to melancholy. This line, in particular, triggered my displeasure: “[H]ow many other schools have an alum who has committed regicide, let alone one who got the chop with a golden-hilted sword?” I was shocked and disappointed because I read the Coloradan for articles that give me insight and inspiration. This article left a worse taste in mouth than the mystery meat I consumed in the late ’80s at Baker Hall.

I can see why this article was included in the publication. It’s the work of a respected Coloradan contributor. It’s scandalous, edgy and involves the Saudi royal family. It’s everything that the mainstream media want but, in my opinion, it’s not the stuff of which the Coloradan is made.

I very much enjoyed the article and picture of Vetsville [Page 57, March 2009 Coloradan]. My husband (a Navy veteran) and I got married in January 1954 and immediately moved into one of Vetsville’s 18-foot trailers for $62 per month rent. We had no running water in the trailers, but there was a building a block or two away that provided showers, sinks, toilets and laundry facilities for Vetsville inhabitants. I remember walking down to wash my hair on a cold January night. When I got back to our trailer, my hair was frozen in icicles! I envied the people in Quonset huts because those seemed “lavish” compared to our trailer.

In the 55 years since, I’ve always lived in houses with indoor plumbing, but the rent/mortgage has been much more than $62 per month!

Kidding around on the slopes

I always enjoy the alumni news and particularly the [March 2009 Coloradan] article regarding the skiing era of Billy Kidd (Econ’69) and Jimmie Heuga (PolSci’73). However, as a loyal and dedicated alum, I must offer a correction. Billy and Jimmie were certainly the first male American skiers to win Olympic medals in ’64.

But the first American to win Olympic alpine medals was my good friend and Mammoth Lakes neighbor, the late Andrea Mead-Lawrence, who won two gold medals in Oslo in ’52.