Hot Reads for the Summer 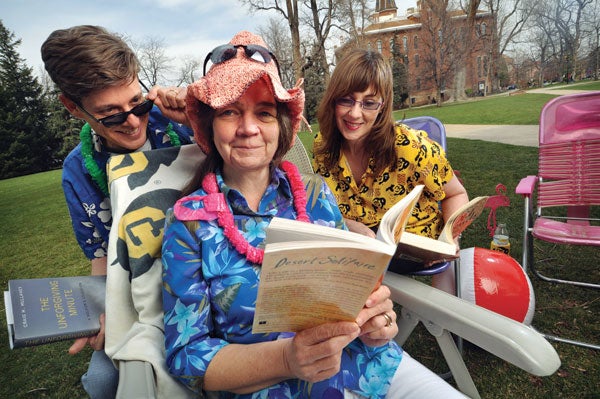 Sharing some of their favorite books are, from left to right, Jim Sheeler (MJour’07) of journalism, Patty Limerick of history and Scarlet Bowen of English, taking a break from classes to gather in front of Old Main.

Forget Oprah’s Book Club or The New York Times bestseller list. If you’re looking for diversity — both in subject matter and artistic form — when compiling your summer reading list, read on.

From hard-hitting memoirs and haunting historical fiction to painstakingly illustrated children’s books and visually captivating graphic novels, a handful of CU professors and one dean share here what their favorite books are, including those they assign to their students.

“I think the tradition of literature is bigger than just prose,” points out English associate professor William Kuskin, whose course “Advanced Graphic Novel” explores everything from postmodern fiction to graphic novels and comics. A graphic novel is a type of comic book that is often similar to a novel in its complex story line. As Kuskin notes in one of his course descriptions, “Jointly pictorial and textual [the graphic novel] represents the human condition through both words and images.”

Pulitzer Prize-winning writer Jim Sheeler (MJour’07), who joined the journalism school faculty in 2008, agrees with the notion that good literature can have a pictorial dimension. He loves to indulge in a well-illustrated junior reader with his 9-year-old son.

“I’m always looking for new ways to tell stories,” Sheeler says. “I love that children’s literature has so often led the way.”

In the spirit of mixing it up a little this summer, we tapped journalism, English, history and business professors for recommendations. Here’s a look at some surprising picks.

A Mercy (Random House) by Toni Morrison: The Nobel Prize-winning author of Beloved spins a tragic tale set in the late 1600s — just as the slave trade was getting started — about a mother who casts off her daughter in order to save her. “It is beautifully written — pristine and poetic sentences with emotional depths that will haunt you for days,” Bowen says.

Notes from a Writer’s Book of Curses and Spells (Peepal Tree Press) by Marcia Douglas: Penned by a CU-Boulder creative writing professor, the novel tells the story of Flamingo, a young writer living among the economic and social upheavals of Jamaica. Bowen calls it “a complete wonder — inventive, surprising and incredibly moving.”

Evelina (Oxford University Press) by Frances Burney: This pre-Jane Austen writer is “just as delightful to read,” says Bowen, and her novel about a young girl’s journey to maturity is a British 18th-century classic.

Killing for Coal: America’s Deadliest Labor War (Harvard University Press) by Thomas G. Andrews: This painstakingly researched book traces the social and environmental factors leading up to the 1914 Ludlow massacre, in which 19 died during a clash between the Colorado National Guard and striking coal miners in Ludlow, Colo. The strikers had killed at least 30 men, destroyed six mines and laid waste to two mining towns in what has been called the deadliest strike in American history. Limerick calls it a “rare and providential convergence of an extraordinary author and an extraordinary topic.”

Some Horses (Vintage) by Thomas McGuane: Nine thoughtfully crafted personal essays about riding, caring for and working with horses.

What her students are reading:

Mayordomo: Chronicle of an Acequia in Northern New Mexico (University of New Mexico Press) by Stanley Crawford: This story is about a white, middle-class discontented man who finds himself managing an irrigation ditch in New Mexico. “This offers a wonderful, detailed account of how a water system really works,” Limerick says. “Once it is in your head, your relationship to the faucet is transformed.”

Desert Solitaire (Touchstone) by Edward Abbey: This book is the author’s enduring 1968 memoir about life as a park ranger in the desert Southwest. Limerick estimates she has read it more than 15 times with her classes over the years.

Tamara Drewe (Mariner Books) by Posy Simmonds: This widely heralded graphic novel by a Guardian cartoonist is inspired by the Thomas Hardy classic Far from the Madding Crowd (Nelson Doubleday). It follows a sexy, post-plastic surgery gossip columnist staying at a stuffy British writing retreat with her rocker boyfriend and uses expressive drawing to playfully poke fun at the English upper middle class. “This is sort of intellectual-lite fare but well drawn and nicely plotted . . . a bit of a mystery, a bit of a sex scandal, a bit of a story about writers,” Kuskin says. “Perfect for an easy summer day of doing nothing.”

City of Glass: The Graphic Novel (Picador) by Paul Auster, Paul Karasik and David Mazzucchelli: A comic adaptation of the existentialist novel by the same name, this novel focuses on a reclusive mystery writer who is mistaken for a detective, decides to take the case nonetheless and ends up losing his mind. “It’s smart and thoughtful and truly intellectual,” Kuskin says.

What his students are reading:

The Naked Lunch (Grove Press) by William S. Burroughs: This seminal 1959 work features a series of loosely connected vignettes (which Burroughs reportedly said could be read in any order) following a drug addict named William Lee (Burroughs’ alter ego) as he travels throughout the United States, Mexico and a dark, fictional land called Interzone. “He rethought how the novel might work to tell a story,” Kuskin says.

The Invention of Hugo Cabret (Scholastic Press) by Brian Selznick: Winner of the 2008 Caldecott Medal, this 550-page junior reader (ages 9 – 12) has captured the attention of adults and is lauded for its artistic mix of prose and vivid charcoal drawings. It tells the story of a 12-year-old orphan living in a Paris train station where he tends to the clocks, pilfers toys and uses them to fix a mechanical man.

The Unforgiving Minute: A Soldier’s Education (Penguin Press) by Craig Mullaney: This is a memoir of a working-class boy turned West Point graduate turned Oxford Rhodes Scholar turned platoon leader in Afghanistan. “It shines a light on a country trying to come of age during wars that my students have lived with since they entered middle school,” Sheeler says.

What his students are reading:

Old Friends (Mariner Books) by Tracy Kidder: This features a collection of resident portraits written from the year the author spent in a nursing home in Massachusetts. Students will read it as part of a new course called “Storytelling and Civic Engagement,” in which they’ll spend time collecting life stories in a local assisted living center.

Predictably Irrational: The Hidden Forces that Shape Our Decisions (HarperCollins) by Dan Ariely: A professor of behavioral economics explores why our headaches persist after a 1-cent aspirin but go away after taking a 50-cent aspirin; why we clip coupons to save 50 cents and then splurge on a lavish dinner and why we go for second helpings when we are full. “As an economist who has always assumed that people are essentially rational, it is time that I explored the dark side of irrationality,” Ahlburg says of the book.

Cold in Hand (Houghton Mifflin Harcourt) by John Harvey: “I read about 50 books a year, mostly crime fiction, and Harvey is one of the best writers of crime fiction anywhere,” Ahlburg says. 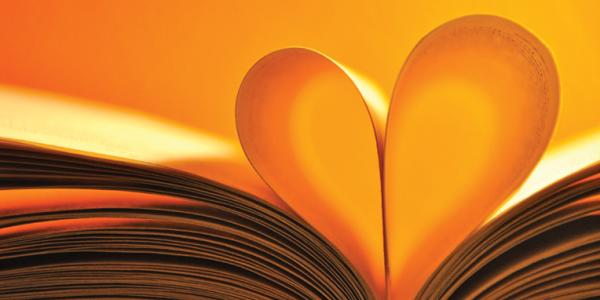 Celebrate summer by taking some time for yourself and reading a book. To assist in compiling your summer reading list, a handful of professors and alumni who have been featured in the Coloradan during the past year have shared their favorite books. END_OF_DOCUMENT_TOKEN_TO_BE_REPLACED

John Branch, a Pulitzer Prize-winning reporter for The New York Times, shared what he learned about America’s most successful rodeo family. END_OF_DOCUMENT_TOKEN_TO_BE_REPLACED