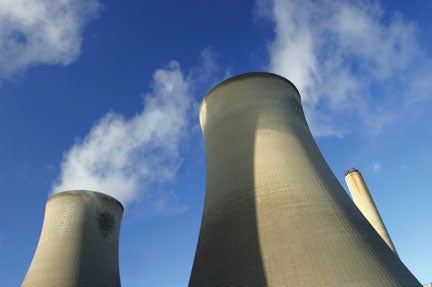 Like more than 900 cities, Boulder has voluntarily committed to meeting the Kyoto Protocol’s greenhouse gas reduction targets, i.e., cut its emissions 7 percent below 1990 levels or about 25 percent below 2008.

And, like all but two of those cities, it is failing to meet its goals.

Boulder spends more than $850,000 a year trying to get Kyoto compliant and has precious little to show for it. Last year, one city program spent more than $260,000 on things like energy audits, insulation rebates, compact florescent bulb discounts and preaching to the persuaded, which got it a thumping 0.6 percent of the way toward its goal.

Which is why I’ve turned into the local nuclear power nag.

Instead of trying to save the world one light bulb at a time, I think Boulder should invest in a nuclear power plant and solve its part of the climate problem once and for all.

Here’s the case:
According to city estimates, in 2007 Boulder produced 1.9 million metric tons of CO2, 57 percent of it from generating electricity from coal and natural gas. It decreased in 2008, but to be Kyoto compliant the city must cut its annual output by an additional 400,000 tons.

So if Boulder switched to nuclear generated electricity, it would meet its Kyoto target more than two times over. Bang. Problem solved.

But what about nuclear waste (I hear you say)? Do as La Belle, France (which gets 80 percent of its electricity from nukes), does. Recycle it.

But surely Boulder doesn’t need a whole nuclear power plant, I hear you say. It certainly doesn’t. Boulder’s electrical needs currently require about 100 megawatts of generating capacity. A typical state-of-the-art nuclear plant produces about 1,200 to 1,400 megawatts. Which means Boulder should partner with a dozen or so other cities failing to meet their Kyoto goals to build a nuclear plant. (Boulder loves to help other people solve their problems.)

But wouldn’t it take years to get a nuclear power plant up and running? Probably. But all the important stuff Boulder does takes 10 or 20 years.

Planning and building the Pearl Street Mall took 16 years. The idea of building the Boulder Turnpike took shape in the 1930s; it opened in 1952. Boulder started lobbying for CU in 1861. It opened in 1877.

But surely Boulderites would never seriously consider nuclear power, would they?

There’s a city election next November. That would be a good time put the question to the voters as an advisory referendum. The answer might surprise you.