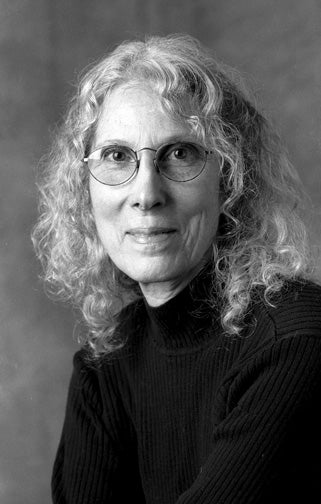 “I thought it was a bust. I’m not going to lie,” the freshman says, thinking back to her introduction to “U.S. History to 1865.” “I thought, ‘Oh, I’m going to have so much studying to do and this tiny little lady is going to come in and speak softly and I’m going to have a hard time staying awake.’ ”

Within minutes of the first class, Ruth Helm (Art’78, MA’86, PhD’91) shattered Stoneham’s assumption. The petite woman with the soft voice soon captivated her and the rest of the class with tales more than two centuries old — not lectures, but stories — not speeches, but narratives. Often, the classes would end on a cliffhanger, ensuring the students would return, awaiting conclusions written long ago.

“Not paying attention wasn’t an option,” Stoneham says. “She brought history to life.”

Born in Philadelphia, Helm grew up surrounded by the historic landmarks she would later bring to life. She interrupted a college degree to marry and raise three children but eventually yearned to return to the classroom.

She arrived in Boulder in 1976, following a divorce, and enrolled at CU along with her daughter (her older son was already attending CU, and her younger son would enroll while she completed her doctoral thesis). After earning her doctorate she began teaching and found a home in the Sewall Academic Program, where students take classes inside the residence hall. As associate director of the program, she earned prestigious teaching awards and wowed students and instructors who praised her ability to present a syllabus as an adventure.

“She was like a responsible — not autocratic — leader of an expeditionary team,” says history professor Patty Limerick. “She was interested in the questions of history, the search, the exploration — but she made clear that we’re all on this exploration together.”

According to women and gender studies senior instructor emerita Anne Marie Pois (PhDHist’88), Helm lived by two adages: “Life is not for sissies” and “The most important job of a human being is being human.”
She embraced both philosophies while battling breast cancer for almost three years while continuing to teach. Then, in the middle of the fall 2008 semester, the class was left with the ultimate cliffhanger: Helm was too ill to teach, and another professor would take over the class. They all hoped it was temporary.

“Her last thoughts,” he says, “were of her students.”

At her memorial service, students lined the back of an overflowing room in Sewall Hall, sniffling and smiling at the announcement that future students would be taught inside the place their professor felt most comfortable — a classroom dedicated in her name: The Ruth Helm Classroom.

After the memorial service, the freshmen remembered all they had learned, then choked back tears.

“She said that history was our story,” freshman Morgan Presson said. “I remember that she told us in class that it was our duty to know our story, our history.