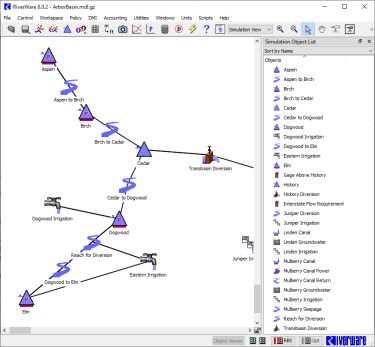 This is an introduction to RiverWare's two most commonly used solution techniques—Introduction to Simulation and Rulebased Simulation—and many of its utilities, output features and diagnostics. This five-day class is for those wishing to become familiar with a broad range of RiverWare's capabilities in a short amount of time.

This is a condensed version of our Introduction to Simulation three-day class. It is a good place to start or for someone needing a basic understanding of RiverWare and its capabilities. This version is a two-and-a-half-day class.

Rulebased Simulation Modeling is a course for users who have a thorough understanding of pure simulation, as covered in the Introduction to Simulation class, and wish to develop models that use rule logic for operational policies that drive the solution. This three-day class requires RiverWare experience. Send us an email if you have questions about eligibility.

Add your email to the next class announcement list