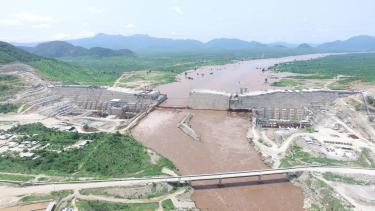 Near-term impacts of the Grand Ethiopian Renaissance Dam (GERD) on downstream water availability for Egypt and Sudan are unlikely to cause shortages, but drought preparedness will require careful coordination, suggests research published October 16 by researchers from the University of Oxford, The University of Manchester, University of North Carolina at Chapel Hill, University of Colorado Boulder, and Duke University. Edith Zagona, director of CADSWES, was a co-author of the study, published this month in Nature Communications .

Construction of the dam, purposed for hydropower, is almost complete, and filling began this year, straining relations between countries along the Nile River. Negotiations on how to fill and operate the dam ended in deadlock again in September, partially over the perceived implications for water shortages in Sudan and Egypt. The proceedings have been made more difficult by a lack of reservoir simulation models that are considered sufficiently credible by all negotiators and decision makers involved.

The study used CADSWES RiverWare hydrologic policy modeling software to simulate conditions during the filling of the GERD reservoir, the “new normal” period afterward and under a historical severe multiyear drought after the filling. It shows that during the initial filling of the GERD, the High Aswan Dam’s (HAD) reservoir will fall, but the risk of additional water shortage in Egypt is relatively low. Once in operation, the GERD will benefit Ethiopia and Sudan without significantly affecting water users in Egypt as long as water flow in the Nile remains similar to its historical average. An “inevitable” severe drought would require an agreement in advance on how to coordinate operations to minimize harmful impacts.

“Detailed modeling and analysis of operations is needed for successful negotiation of an agreement,” said Zagona. “In this paper the results of the complex simulations are presented in a way that nontechnical decision makers and others can understand.”

The paper concludes that developing robust contingency plans is not an insurmountable task and that in most years the GERD and HAD will require only data exchange and modest coordination.

Read more about the study .