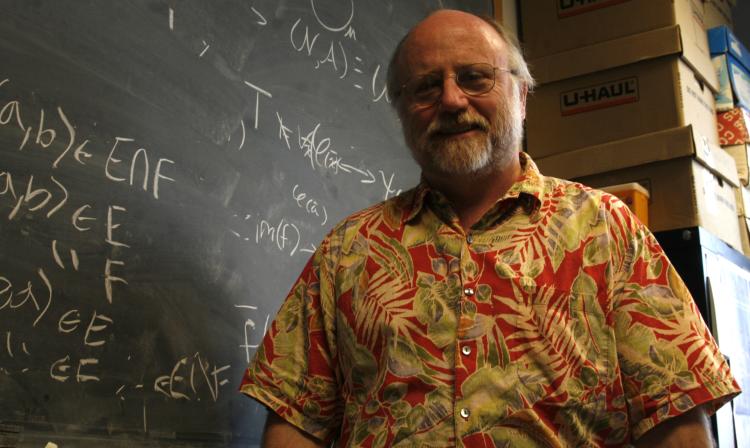 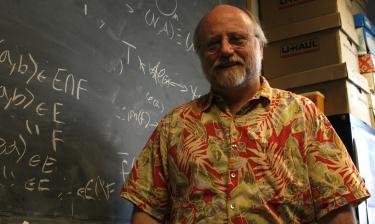 Keith Kearnes is sitting in his unlit office in the second floor of the Department of Mathematics building. In his hand is a set of stapled yellow sheets jotted with formulas and numbers.

“Some students will submit it on paper; the other solution was submitted electronically,” he says as he holds the papers. The collection of sheets is a solution for a mathematical problem.

He takes another look at it, flipping through the pages. “This person, looks pretty good,” he says with a nod. “Their answers is the correct answer, I just have to check the arguments.”

Kearnes is a professor of math at CU, and while he specializes in algebra, logic and combinatorics, he is also one of four members of a committee of math professors who construct a Problem of the Month as a monthly contest open to all CU students. The paper he is holding in his hand is a solution for April’s problem.

Other members of the committee including three more math profs:  Janos Englander, Sergei Kuznetsov and Alexander Gorokhovsky. All three work together to formulate problems for undergraduate math majors at CU and then post it on the departments website.

The program will celebrate its 10th anniversary in the fall. Kearnes says the program was initiated in 2001 when Kearnes was hired by the math department. “In my first year here, I noticed that we didn’t have anything like that. I don’t even think we had a math club,” he says. “We didn’t have a lot of interaction between undergraduates.”

Kearnes decided to speak to the chair, who accepted the idea and found a source of money as a prize to those who correctly answered the problem. He also asked for help in creating the problems.

He would soon find Kuznetsov, a Russian mathematician who arrived at CU two years before Kearnes and who also had led a similar math competition at the national level in his native country. “He had a lot of experience in organizing these kinds of competitions and producing problems,” Kearns says.

During the fall of 2001, Kearnes added another member to his troupe in the form Gorokhovsky. Gorokhovsky’s path to CU included a fascination with the developing problem of the month program, and Kearnes says Gorokhovsky told him it ultimately influenced his decision to work at CU.

“(Gorokhovsky) said if they have a problem of the month competition, it must be a civilized department,” Kearns says.

Creating the problem, discovering a solution

Creating the problem of the month takes brainstorming sessions involving all four professors. Kearnes says at times other faculty members suggest a problem, but it usually falls on the foursome to create the mathematical puzzles.

The four gauge the difficulty of a potential problem by attempting to solve them; if they all solve it quickly, the problem is deemed to easy. If none of them can solve it, it is turn deemed to difficult.

“If one of us proposes a problem and none of the other ones can solve it, we don’t use that problem,” affirms Kearnes. “Usually if one of them proposes a problem, and in a day or two everyone has figured out how to do it, that’s a candidate.

Once a candidate is chosen, it is posted on the math department’s website.

Solutions are accepted all month long, but Kearnes says most solutions are in by the first week, evident by the solutions he was holding in his office during the first week of April. He says that students can work individually or in teams to solve the problem.

The prize for cracking the problem? Besides a certificate and the praise by math professors, winners receive a $50 prize. A second place finisher receives $25.

To keep others from sharing answers and attempting to win both prizes, Kearnes says that the participants are not informed if their solution is correct until the end of the month.

“So we don’t even tell people if a solution has been turned in yet, because sometimes students will think ‘oh they already have 3 solutions, some of those are probably right, there is no point in trying to solve it,’” he says. “So we don’t tell anybody if there are any solutions at all, or if any are correct, so that students can keep trying through out the month.”

At the end of each month, the professors will gather and grade all solutions. Winners are chosen by a first-come, first serve basis, so even though they may receive several correct answers, the prize is given to those who give the correct answer first.

Kearnes admits that there are not generally many participants each month, and he says usually the number is less than 10 solutions. But it can vary. “Some months we get a lot, in fact this month we had two within the first two days of the month,” he says. I’m hoping we get more through out the month.”

Two months earlier, Kearnes and co. were able to stump everyone, as they received no solutions.

“We get a lot of solutions that are not correct, and last month for the first time we got something that wasn’t a solution; a student did a computer simulation of the problem to try to help him discover the solution,” he says. He did not submit a solution, but it’s on the department webpage.”

Kearnes says the problem of the math competition helps foster a competitive nature for undergraduates as well as helping those with a fondness for math meet. “It may be that this is a way that people with interest in math can find other people interested in math,”

As the saying goes, to the winner goes the spoils, and in this case, Kearnes feels the reward extends beyond the $50 check. He feels the motivations his students gain is a valuable teaching method.

“One of the things is everybody has whatever their interest are, but some small amount of positive encouragement goes a long way and it could just be I have a certificate that says I was the best this month,” he says. “And there is something about that, you can read math problem on the web, but if you know you’ll get a certificate, you’ll get recognition, you’ll be able to tell your friends I made money doing month, that’s kind of a validation of your interest and I think it kinds of helps focus your interests.”

Then again, the monetary prize is always a delicious icing on the cake. As to what the students do with the prize money, Kearnes has no idea. But he knows what we would do.

“If I were the one, I would take my friends out and say we are paying for this beer with that math solution. Somehow, that’s such a nice feeling,” Kearnes says.