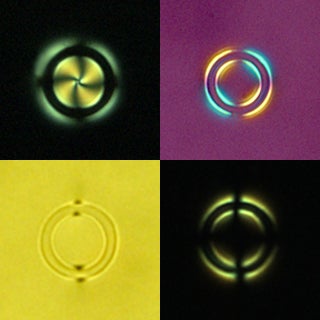 Being abundant in nature, colloids find increasingly important applications in science and technology, ranging from direct probing of kinetics in crystals and glasses to fabrication of third-generation quantum-dot solar cells. Since naturally occurring colloidal particles have shapes that are typically determined by minimization of interfacial tension (e.g. during phase separation) or facetted crystal growth, their surfaces tend to have minimum-area spherical or topologically equivalent shapes such as prisms and irregular grains (all continuously deformable – homeomorphic – to spheres). Our research group fabricates and studies colloidal particles with different numbers of handles and genus g. When introduced into a nematic liquid crystal, these particles induce three-dimensional director fields and topological defects dictated by colloidal topology. While electric fields, photothermal melting, and laser tweezing cause transformations among configurations of particle-induced structures, three-dimensional nonlinear optical imaging reveals that topological charge is conserved and that the total hedgehog charge of particle-induced defects obeys predictions of the Gauss-Bonnet and Poincaré-Hopf index theorems. This allowed us to establish and experimentally test the procedure for assignment and summation of topological charges in three-dimensional director fields. These direction may lay the groundwork for new applications of colloids and liquid crystals that range from topological memory devices, to new types of self-assembly, to the experimental study of low-dimensional topology.