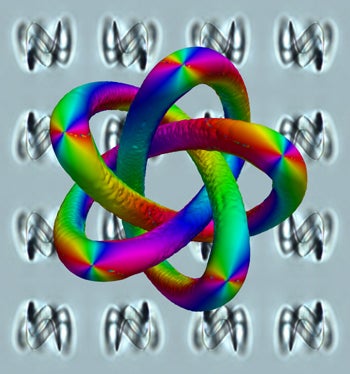 Since the origins of the mathematical knot theory, development of which was prompted by early attempts of understanding structure of atoms, knotted fields and vortices arise in superstring and quantum field theories, quantum chromodynamics, plasmas, cosmology, elementary particles, and other systems. Their complex structures can be predicted from solutions of nonlinear field equations, but are rarely accessible to direct experimental visualization. On the other hand, colloids and liquid crystals offer complexity in degrees of freedom and symmetries that allow for probing analogous phenomena on completely different scales, such as kinetics of atoms in glasses and cosmic strings in the early Universe. To extend these possibilities, our group developes nematic colloids with mutually tangled physical knots of particles and molecular orientation fields. The interplay of topologies of surfaces, fields, and defects guides the molecular orientation field to comply with the knotted particle shape, generating knotted, linked, and other three-dimensional configurations that match theoretical predictions and may allow for insights into many topologically analogous phenomena in other branches of physics. Ranging from scales of elementary particles to cosmology, there are few theoretical predictions of knotted field configurations that can be tested by experiments, which is due to the lack of experimentally accessible systems and techniques. Our model system of knotted nematic colloids for probing of a potentially scale-invariant interplay of topologies of knotted surfaces, fields, and defects. Similar to probing the cosmological Kibble mechanism using LC phase transitions and melting of atomic crystals with colloids, this model system may enable new cosmology- and particle-physics-relevant experiments in laboratory as well as topological soft matter arising from the directed mesoscale self-organization of knotted colloidal “atoms” driven by topological relations.