The Arthur Nozik Lecture Series honors the research and career of Prof. Nozik, who has been a leader in the thriving ecosystem of renewable energy research that has developed along the front range over the last four decades.

In response to the 1970’s oil crisis, the Carter Administration initiated the development of a number of renewable energy programs, designed to reduce our dependency on fossil fuels. This included the establishment in 1977 of the Solar Energy Research Institute (SERI), which, in 1991, was designated a National Lab, and became the National Renewable Energy Laboratory (NREL). SERI grew from zero staff in 1977 to 1200 by 1979, with Art joining in October of 1978, focusing on fundamental research in the area of solar photon conversion to solar fuels (mainly H2 from solar H2O splitting) and photovoltaic electricity.

A defining feature of Prof. Nozik’s broad research portfolio, which includes contributions in the areas of semiconductor photoelectrochemistry, monolithic tandem devices (photochemical diodes), quantization and hot electron effects in semiconductor quantum dots (QDs), and multiple exciton generation (MEG) in nanostructures has been his ability to foster and guide interdisciplinary collaboration. The ability to operate at the intersection of disciplines has driven his innovative research, an approach that was recognized by CU Boulder, when he was appointed Professor Adjoint in 1998 and Research Professor in 2016.

The recipient of numerous awards and honors, Prof. Nozik has published more than 270 peer-reviewed papers, proceedings, and book chapters. He has been cited more than 47,500 times with an h-index of 99, and presented more than 370 invited, plenary, and keynote talks.

The RASEI Nozik Lecture series brings world-renowned scientists to the CU Boulder campus to present on their work, meet with RASEI researchers, and engage with the renewable energy collaborative ecosystem that has grown across the front range.

Find out more about Prof. Nozik

A Conversation with Art Nozik 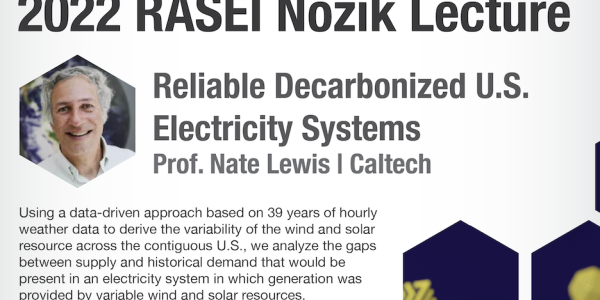