A Window into Modern Japan: Using Sugoroku Games to Promote the Ideal Japanese Subject in the Early 20th Century 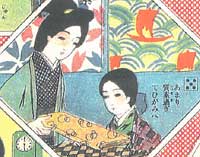 Sugoroku, Japanese board games printed and published on newsprint, have been popular since the 19th century, if not earlier. This style of game is thought to have originated in China in the 6th century and later been imported to Japan. Starting in the Meiji period, sugoroku games were mass produced and distributed free in magazines and newspapers, serving as informal and social education to the masses of Japanese people who were witnessing, and adjusting to, rapid change and modernization in all aspects of life. According to the Princeton University Digital Library website:

A wide range of topics and themes can be found in the heavily illustrated game boards, which served not only for recreation but also for the dissemination of information, commercial advertising, literacy education, moral and political socialization, and militarist propaganda targeting children and adults alike (Japanese Prints 2010).

Like public service announcements (PSAs) today, select sugoroku during Japan’s Modern Era, 1900s-1930s, served a purpose: to educate people about desired behaviors. With a positive tone and colorful graphics, “educational” sugoroku demonstrated behaviors that exemplified “good subjects.” They thus benefitted the nation by showing players what they needed to know to become good subjects who were a credit to modern Japan. The games conveyed national goals or messages like “Learning about the world is important!” or “Look at the battles our soldiers are winning against countries much larger than ours!”

While PSAs may also tell American viewers what they need to know about a particular  situation or how to act in their own or the nation’s best interests, PSAs seem to function as cautionaries, such as “Texting while driving may be the last thing you will ever do!” Unlike most PSAs, many sugoroku from early modern Japan (1880s-1930s) were meant to be enjoyed while inculcating values in both children and adults who enjoyed playing the games.

In this lesson, students will examine a sampling of sugoroku games used to convey societal ideals and offer informal education in early 20 th-century Japan. Students will apply their analysis of these sample games to identify and compare the underlying messages to those of historical and contemporary American PSAs. Initially, the class will work together to analyze one sugoroku that focuses on imperial troops fighting during the 1940s. Students will practice the skills of reading visual data in this collective example. (Note:  This sugoroku was selected for ease of visual analysis as it dates to WWII, a period with which students and teachers may be more familiar.) Next, working in small groups using a collection of sugoroku games available online, students will analyze additional games focusing on varying groups of Japanese subjects (men, women, children). The groups will collect and share information learned from the games to further develop their understanding of roles and goals for Japanese subjects during Modern Japan, 1900-1930s.

Setting the Context: Creating a Modern Emperor for a Modern Japan. On the surface, the  fall of the Tokugawa Shogunate and restoration of Emperor Meiji suggests a momentous transformation of power within Japan. However, according to Andrew Gordon, scholar of Japanese history at Harvard University:

Organized and carried out by disgruntled members of the former Tokugawa Era samurai class, the coup symbolically reinstated the power of the emperor while writing the revolutionaries behind it into positions of power in the new Meiji government. As Japanese leaders created a modern nation-state between 1880 and 1930, they also consolidated the idea of the emperor as the “father” of the nation-state as a way of gaining obedience and loyalty of the Japanese people (Garon n.d.).  During these pivotal decades of creating a modern national identity, the emperor and his position were molded into symbols of the state: the emperor revered as divine, his position within Japanese society as sacred. However, true power rested with the elites who ruled the government. Unifying the people through a strong sense of identity, national interest, and pride was a goal of the Meiji government in the late 1800s and continued into the 20th century. The emperor was one critical piece of this identity and unity.

Japan was certainly not the only country promoting nationalism or glorifying its leaders at this time; one only need to look to Europe or the United States at the same time to witness a similar model playing out. Creating national identity was a major project of nation-state building in the 19th and early 20th centuries, as it is today. In Japan, two of the most important apparatuses through which the government worked to build a new national identity were the education system and the military (Yonemoto 2014). Through the Meiji period, education throughout the country was centralized and standardized; textbook content was controlled by the state. In schools, the day began with a reading of the “Imperial Rescript on Education.”  Through this recitation, students were continuously reminded of their responsibilities and loyalties to the nation and the emperor, not unlike the Pledge of Allegiance, which was promulgated for a similar purpose in 1892.

A conscript army was established for the purpose of building military strength and also as a way of building allegiance to the nation. In 1889, Japan adopted its first Western-style, written constitution, modeled heavily on the German constitution of the time. In the “Rights and Duties” section of that document, the constitution formalized the Japanese people’s relationship to the state. The constitution emphasized the Japanese individual’s duties to the nation, while outlining  individual rights that must be kept in balance with, and could be sacrificed to, the greater needs of the country as a whole.

As noted in the Introduction, the Meiji period was a time of rapid transformation of every aspect of Japan. People both wanted and needed to know about the many changes their country was undergoing and their roles in this changing nation. In the Meiji period and beyond, into the early 20th century, the media played an important role in conveying to the Japanese people what it meant to be a member of modern Japanese society—what it meant to “be Japanese.”  Like the colorful, vibrant woodblock prints that captured the dynamic life in Meiji Japan, sugoroku were distributed free or at minimal cost as paper inserts into magazines and newspapers. They could be cheaply produced and both widely and quickly distributed, making them effective means of informal public education. Sugoroku on a vast array of topics, from  proper family roles to student responsibilities to the countries of the world, taught norms of behavior, social relationships, geography, history, and much more as they engaged players in the fun of gamesmanship.

As a culminating activity, students may be assigned the task of writing a reflective paragraph or essay. The following instructions can be used:

Based on these selected sugoroku and your own analysis from the worksheets, describe and explain some of the general attributes and/or roles of the ideal modern Japanese subject, 1900-1930s. Use specific examples from three different sugoroku.

Note:  You may want to provide students with links to the six games so that they can refer to the primary sources as necessary.

Standards for the English Language Arts: