Home Becoming Modern The Nature of Sovereignty in Japan, 1870s-1920s 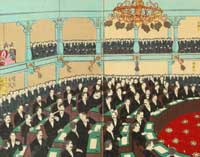 From the 1870s through the 1920s, Japan underwent rapid and widespread modernization and nation-building. In the Meiji period, Japanese leaders looked to European models of constitutional monarchy, adopting a system of imperial government modeled most closely on the Prussian model. As Japan transitioned from the Meiji to the Taishō periods, government and politics were increasingly influenced by Western liberal ideas. Tensions arose between the growing interest in liberal political thinking and the established political context, established through the Meiji Constitution of 1889, of a constitutional monarchy, headed by a hereditary emperor.

This lesson looks at those tensions through close reading of historical texts. Among the questions students explore in this lesson is the guiding question: How did prominent thinkers craft notions of sovereignty in this time period, when the relationship between the voice of the individual and the authority of an imperial state was in flux?

The lesson begins with a brief review of Japanese history from 1868 to 1926.  Students are then engaged in crafting preliminary definitions of national, polity, constitutional, democracy, imperial, and sovereignty to begin to consider the relationship between the individual and the state in this time period.  Using a cooperative jigsaw, students then analyze three documents from the 1870s-1920s to compare and contrast their preliminary definitions with those of the document authors.  After sharing their analyses and revised definitions, students attempt to synthesize the vocabulary terms to begin to understand (1) the construct of the Japanese government in the early 20th century and (2) tensions that evolved between individual rights and expressions, on the one hand, and the powers of the Japanese state on the other. Armed with these definitions, students then work in pairs to compare and contrast two documents from 1925 to further their inquiry. The closing discussions focus on the power that the individual and the state each possessed by the end of the 1920s.

The Meiji oligarchs of the late 19th century did not create and did not intend to create a democratic system of government. However, by the early Taishō period, popular interest in a voice in government was growing. Historians present Japan’s Taishō period, from 1912 to 1926, as a period of growing democracy in Japan. This narrative is based on evidence of increased political activity by a widening array of political interests, the emergence of political parties, increased incidences of popular expressions via social protest and unrest, and on the passage of the 1925 Universal Law of Male Suffrage. Often referred to as the period of Taishō Democracy, this complex period might be better understood as a negotiation for some popular rights within the context of an imperial political system. The people of Japan remained subjects of the emperor even as some sought greater rights as citizens.

The Beginnings of Modern Constitutional Government in Meiji Japan.

In 1868, a group of young samurai successfully challenged and replaced the Tokugawa shogunate (bakufu) with a government based in part on Western political ideas and models. These samurai established the newly crowned 15-year-old emperor, known as Emperor Meiji, as the head of the new government, drawing on the centuries-old imperial line to legitimize this new government. This overthrow of the Tokugawa government is known as the Meiji Restoration, for the return of the imperial family to leadership of the nation following 250 years of rule by the Tokugawa family. The Meiji period, which lasted for the life of the Meiji emperor, until 1912, was a period of enormous change in all aspects of Japanese life, from government and international relations to economy, social structure, and culture. For the new modern nation, the emperor served as the face of modern government and represented to the average Japanese the state of Japan to whom they now owed their loyalty. The samurai leaders who engineered the restoration of 1868 became the oligarchs of the new Japanese government. As in many modern nations at the turn of the 20th century, Japanese people were subjects ruled by a monarch, rather than citizens with a voice in the government.

One of the primary goals of the Meiji government was to create a modern nation on par with the leading Western nations of the world.  A symbol of this status would be to achieve international power and respect sufficient to renegotiate the unequal treaties imposed on Japan by Western leaders in the waning days of the Tokugawa government. Starting with the Harris Treaty of 1858, Japan was coerced into granting a range of trading advantages to the Western powers. For example, Japan lost the right to set tariffs on imported goods. Westerners in Japan were exempt from Japanese laws (extraterritoriality). An increasing number of ports had to be opened to foreign vessels.

The Meiji government very selectively chose aspects of Western industrial, economic, and political systems that could best help them achieve their goal of strengthening Japan’s international position. The oligarchs’ intention was to create a government based on a written constitution and headed by a monarch, in this case Japan’s hereditary emperor. Their intention was not to create a representative government or a democratic society. After studying many models, Japan’s leaders drafted a constitution based on the German (Prussian) model of the time.

Also beginning in the 1880s, intellectuals began to discuss how Western ideas and values could be adapted to Japan’s situation. While these discussions represented an end to the unquestioned acceptance of Western ideas early in the Meiji period, they were still primarily concerned with how Japan could establish itself as an equal of the West. One leading intellectual of the time, Fukuzawa Yukichi, focused on Japan’s need to follow its own course towards modernization—a course in which the values of the past would not inhibit Japan’s modernization and the values of the West would not alter Japan’s essential identity. Part of this discussion focused on resolving the tension between the need for Western forms of government and the need to establish the emperor as the source of government power. Ironically, the imperial system was as much a construction of the Meiji oligarchs as was Japan’s new modern military and its industrial economy. Intellectuals like Fukuzawa were doing as much to explain the imperial system to the Japanese people as they were explaining Western ideas.

Pressure for Democratic Reforms to Government in Taishō Japan.

While the 1889 Constitution resolved the pressure for a constitutional government, by the second decade of the 20th century, the early years of the Taisho Emperor, political parties had begun to form. These parties called for a government that was more responsive to the needs of the Japanese people. The extension of suffrage tended to be the centerpiece of these calls for greater representation. Over the course of the 1910s and 1920s, a variety of new political parties emerged, both liberal and conservative. Some were very short-lived. Some were the result of the merging of older parties. In addition to political parties, other more radical groups appeared during these decades. These groups were influenced by global movements in socialism, Marxism, and anarchism. They advocated for greater suffrage and greater protections of the working classes. They furthered their goals through public protest and mobilization of the proletariat. While riots during this period are often characterized as examples of democratic movements, the actual agendas of the groups involved do not always fit with ideas of democracy today. These radical groups also faced enormous pressure to conform to more mainstream political ideas. Many members of these groups were arrested, regularly followed by police, and could become targets of mob violence like that following the 1923 Kanto Earthquake.

This period of political activity is often called Taishō Democracy. The period is strictly defined by the reign of Emperor Yoshihito from 1912 to 1926. As his father was known as the Meiji Emperor, Yoshihito was known as the Taishō Emperor. Unlike his father, Yoshihito was not healthy, and for most of his reign, his son Hirohito ruled as regent. This lack of a strong imperial presence may have contributed to a less constrictive political environment, which allowed movements for individual rights and popular input into government to grow. At the same time, the Taishō period saw the end of the Meiji oligarchs who had controlled the government since 1868. Some of the most powerful new political leaders rose from the ranks of the political parties, who had some ties to a constituency, no matter how small the electorate actually was. This shifting of power from one generation to the next may also have provided some opportunity for greater political discussions.

A significant document of this period, Yoshino Sakuzō’s “On the Meaning of Constitutional Government…” (1916) demonstrated the ongoing need to align Western ideas of representative government with Japan’s specific situation. Yoshino tried to resolve the tension in the Meiji Constitution between the sovereignty of the people and the sovereignty of the emperor by articulating the concept of minpon shugi, which can be roughly translated as “people-as-the-base-ism.” Unlike the concept of minshu shugi, in which sovereignty resides wholly in the people, this new concept of minpon shugi credited the government as working always with the people in mind, even though the people had little or no direct influence on the government.

The 1925 Universal Male Suffrage Law seemed to be the culmination of the “democratic” movements of the Taishō period. Yet, another law, passed the same year, provided a stark contrast to the Universal Male Suffrage Law.  While the Male Suffrage Law provided the vote to men—a significant step in democratic government—the 1925 Peace Preservation Law, a response to the unrest following the Kanto Earthquake, greatly restricted the opportunities for political activism. Together, these two laws demonstrate the potential for democratic reform in the first three decades of the 20th century and the very real limits on those possibilities.

Give the pairs time to discuss these questions and then have groups share their ideas and interpretations with the class. Write, or type, their responses on the board. Possible answers are shown in the Final Discussion Answer Key.

Have students conduct further research and write a short opinion piece on the question: What was the nature of sovereignty in 1870s-1920s Japan?

A.  Reconstruct the literal meaning of a historical passage.
B.  Identify the central question(s) the historical narrative addresses.

Yoshino Sakuzō. “On the Meaning of Constitutional Government and the Methods by Which It Can Be Perfected.” (Kensei No Hongi O Toite Sono Yūshū No Bi O Seisu No To O Ronzu). 1916. In Sources of Japanese Tradition, Abridged: Part 2: 1868 to 2000. Compiled by Wm. Theodore DeBary, Carol Gluck, and Arthur E. Tiedemann. 2nd edition. New York: Columbia University Press, 2006. 168-9.