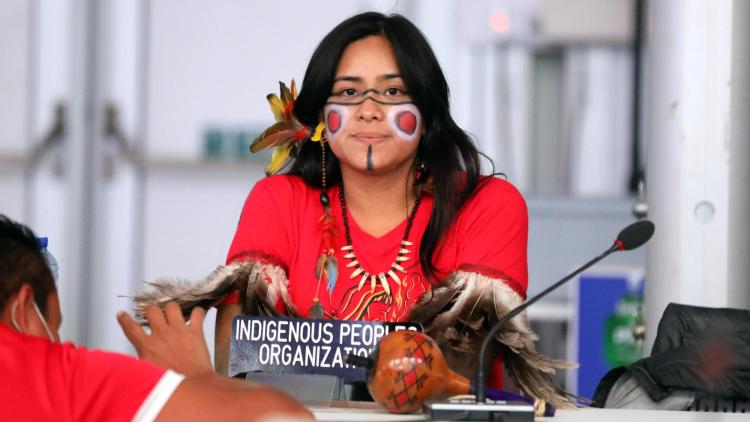 Indigenous Peoples’ work leading up to and during the summit led to notable positive outcomes, including 137 countries signing onto the Declaration of Forest and Land Use, a $130 trillion commitment to climate finance, and a $1.7 billion pledge of direct support to Indigenous Peoples and local communities among them.

But many Indigenous Peoples fear that these solutions will not meet the immediate challenges they are facing at home. Declaring a state of emergency after the outcomes of COP26, women from the Kichwa Indigenous People of Sarayaku in Ecuador stated: “Indigenous peoples resist the extraction of natural resources with our bodies, with our lives. Our contribution to tackling climate change must be recognized. Our solutions must be heard.”

Victoria Tauli-Corpuz, former UN Special Rapporteur on the rights of indigenous peoples, who is now head of the Tebtebba Foundation, wrote in The Guardian, “We indigenous peoples will continue to do our duties and fulfil our obligations to Mother Earth and to our future generations. But we will be able to do these better if our collective rights to our lands, territories and resources, to culture and to our traditional knowledge, practices and innovations are respected and protected.”

Among climate priorities shared by Indigenous Peoples at the summit were the need to elevate and adhere to free, prior and informed consent (FPIC) in projects and deal-making, to recognize land tenure and land rights, to increase inclusive development of climate strategies with nation states, and to create direct access to climate finance for Indigenous Peoples.

“It is impossible to confront the global existential crisis of climate change without the active leadership and engagement of the world's Indigenous peoples,” said Fawn Sharp, President of the National Congress of American Indians, who became the first elected tribal leader to receive U.S. diplomatic credentials to COP.

“Tribal Nations of the United States of America have an incomparable brain trust of leaders, scientists, and policymakers who are ready to lead that effort. Indigenous communities globally have one thing in common: we are resilient survivors, and we will help lead the world through this challenge to a brighter, more just, and more sustainable future," Sharp said.

Andrea Carmen, Executive Director of the International Indian Treaty Council, shared with Indian Country Today a summary of recommendations to COP parties from a UN working group of Indigenous elder and youth knowledge holders from different regions, who had their first official gathering at COP26. Among recommendations were the recognition of “the rights and land tenure of Indigenous peoples to lands, forests and waters,” “an end to allowing Indigenous rights defenders to face criminal actions, persecution and assassination,” and that Indigenous Peoples as knowledge holders “should be able to participate directly with our own voices in the UN process” to ensure that “rights, cultures, lands and ways of life” be respected.

Speaking on behalf of the caucus, Terena called for rapid emissions reduction through a just transition from fossil fuels to ensure the 1.5 degree future, and expressed concern about “Nature-based Solutions” being developed without FPIC, thus “undermining self-determination and secure land tenure.” In closing, she noted that Indigneous Peoples’ rights and traditional knowledge “are the solution.”

"If the global community is serious about tackling the problem of climate change, it must include the input of the very people that have been caring for Mother Earth for centuries, Indigenous Peoples, and take a rights-based approach that honors, respects, and implements the principles of Free, Prior and Informed Consent and the UN Declaration on the Rights of Indigenous Peoples," said Galina Angarova, Executive Director of Cultural Survival, which led a delegation to COP26.

Grist reported one of the bigger “wins” at COP26 was “the last-minute inclusion of explicit recognition of Indigenous rights in the text of Article 6, the article of the Paris Agreement that regulates carbon offsets markets.”

Unfortunately “there is no legally binding responsibility to adhere to this language,” according to Jade Begay, climate justice campaign director at NDN Collective. Requirement to consult is only “in accordance with domestic arrangements,” so Indignous Peoples are still at risk in places where their rights are not fully recognized. “That’s really concerning because these loopholes [can] continue ongoing land grabs and violations to human and indigenous rights through the carbon market,” Begay said.

“Indigenous peoples hold climate solutions inherently through our cultures and through our land-based practices, which we have not lost touch with,” said Kailea Frederick, NDN Collective’s climate justice organizer and editor of Required Reading: Climate Justice, Adaptation + Investing in Indigenous Power. “Returning land back to Indigenous peoples is a core part of climate mitigation work. We need land returned in large quantities at this moment so that Indigenous peoples can be in direct conversation with the land and engaged in their traditional practices, which inherently mitigate climate change,” said Frederick

There have been some positive changes where political commitments are recognizing and securing Indigenous land rights. Joseph Itongwa, national director of an Indigenous alliance in the DRC supporting Indigneous rights and community forest conservation, discussed the country’s movement forward in this area, as well as issues that still must be addressed. “We have to be sure that people who were expelled from protected areas can come back or receive just compensation for the damages they’ve suffered,” Itongwa told Mongabay. “In the future, we must be a part of the decision-making in designating and managing protected areas.”

For ‘Net Zero’ to Work, Indigenous Inclusion is Essential

One concern shared among several Indigneous leaders at COP26 was the carbon offset market and governance and human rights failures inherent in the Net Zero strategy. “We cannot have market-based mechanisms if they violate indigenous people’s rights,” Tauli-Corpuz told UN News.

"The evidence suggests the first question investors in the carbon market should ask is whether credits linked to conservation of biodiverse ecosystems have involved consultation and consent of traditional Indigenous communities of the forests," said Peter Seligmann, CEO and founder of Nia Tero.

Rather than focus the conversation around Net Zero, Tom Goldtooth, Executive Director of the Indigenous Environmental Network (IEN), told Democracy Now! that absolute reductions in carbon is essential and an “issue of life and death” to Indigenous Peoples. He explained further: “Climate capitalism is something that’s going to affect our people. So we’re for these conservation projects, biodiversity protection projects, but outside of a carbon market system,” he said.

IEN’s Thomas Joseph, who campaigns to ensure Indigenous Peoples' land rights are included in treaties concerning carbon trading, told CNN, "This tenure is under threat by carbon markets, because you have to think about ownership and who's trading and who's buying and who's buying the right to what. And so when we're talking about using native lands for carbon sinks, that's giving corporations the ability to mandate what goes on those lands.”

In the event where governmental action to protect Indigenous Peoples human and land rights, or worse actively violates them, it is ultimately up to companies to eliminate risk to their business by preventing harm to Indigneous communities. This is increasingly important with the influx of monies to Indigenous-focused climate action through pledges and commitments at COP26 and beyond.

“There really needs to be a kind of fundamental change in the climate finance architecture,” said Andrew Davis, a co-author of the new PRISMA Foundation report, Territorial Finance: Empowering Grassroots Climate Action. Davis told Mongabay that finance to Indigenous-managed regional initiatives should provide direct support to local community organizations. “The most important thing for international donors to do is to get to know the territories,” Davis said.

The report is one among many published in 2021 that articulates opportunity and need for centering Indigenous Peoples in climate action. These include IEN’s Indigenous Resistance Disrupts Billions of Tons of Greenhouse Gas Emissions Annually, the Institute of Tribal Environmental Professionals's The Status of Tribes and Climate Change, and the UN Intergovernmental Panel on Climate Change report, which described several ways Indigenous inclusion can help mitigate the climate crisis.

Ultimately, in order for project structure of climate finance to work long term and be accessible to Indigenous Peoples, “funds must be allocated for the communities, and managed from [our] territories,” said Hernando Castro, the Huitoto-Nɨpodɨmakɨ leader in Columbia.

David Kaimowitz, an advocate for Indigenous land rights and manager of the Forest and Farm Facility at the Food and Agriculture Organization, told Mongabay financiers are “going to have to realize that the way to manage risk is not by using traditional rules, mechanisms, and approaches. It’s by having an intercultural dialogue that asks, how can we ensure that money is well used and gets the results we’re looking for in a way that’s culturally compatible with the reality that Indigenous peoples are living in?”

Taken together, the statements and participation of Indigenous Peoples at COP26 send a strong message to companies, financiers, investors and shareholders regarding Indigenous priorities and market risk. Thus, COP26 is now a benchmark for all involved to measure whether those priorities will indeed be integrated into decision-making and operational mechanisms to preserve biodiversity, to respect human rights and to achieve a sustainable future. Or, whether those priorities will once again be sidelined leading to increased material risk as policy-makers seek Net Zero policies without alignment with the environmental and social values they have committed to at the summit.