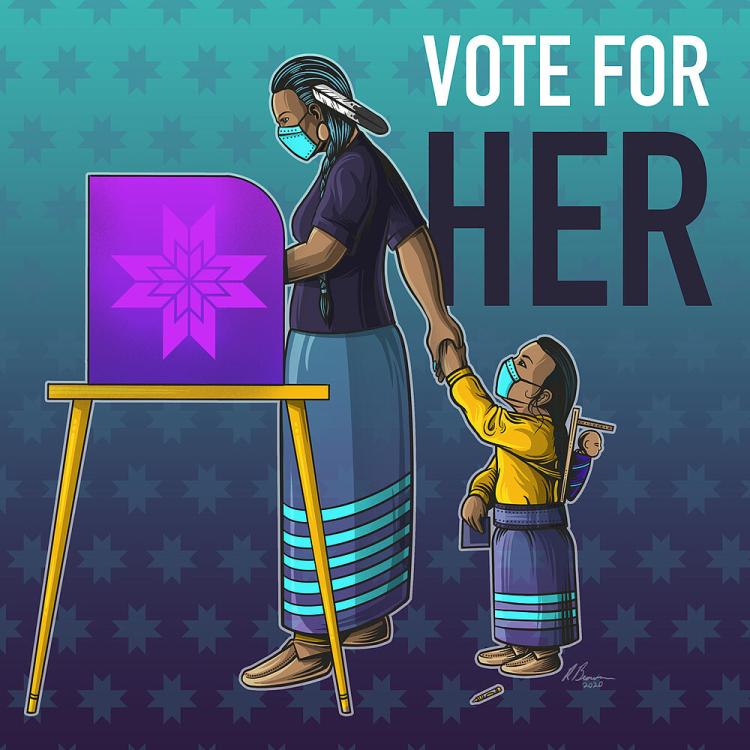 Civic engagement is critical to a just and functioning democracy. This requires voter enfranchisement for all citizens, as well as access to voting resources to empower voters and creating readily accessible options for voting. Unfortunately, for the Indigenous Peoples living in the United States, voting has never been simple.

Native Americans were not granted citizenship rights in the United States until 1924, and state laws prevented Native Americans from voting as late as 1958. The passage of the Voting Rights Act in 1965 provided mechanisms for protecting the right of all Americans to vote, including Native Americans, but progress has been slow and strenuous. Strides have been made in recent years towards better enfranchisement of Native voters, as evidenced by the historic numbers of Native people running for and attaining public office, and by recent legislation such as Savanna’s Act to address the Murdered Missing Indigenous Women and Girls crisis, and the Native American Business Incubators Program Act.

Despite strides forward, a recent report by the Native American Rights Fund (NARF) found  obstacles at every turn for Native voters, and the COVID-19 pandemic has further complicated voting access for millions of Native Americans. Not only are there physical barriers to voting, but discrimination and skepticism of the government continue to discourage voters. According to NCAI, the voter rate is approximately 14% lower among Native Americans than other racial and ethnic groups, and there are worrying signs that the gap is increasing.

This election cycle, First Peoples Worldwide and the American Indian Law Clinic (AILC) supported Natives Vote 2020, which provides information and resources for voters in Indian Country, including Native-centered voting guides for all 50 states. The project has been a collaboration between IllumiNative and Native Organizers Alliance, with support from the CU Boulder Outreach Awards Committee and NDN Collective. It stands alongside other valuable resources, such as NARF’s Native American Voting Rights and the National Congress of American Indian’s NativeVote.org.

Sam Barth, Social Justice Fellow at First Peoples Worldwide, discusses First People's involvement with Natives Vote, its implications and uses for the current election, and the crucial role of civic participation when advocating for the human rights of Indigenous Peoples. 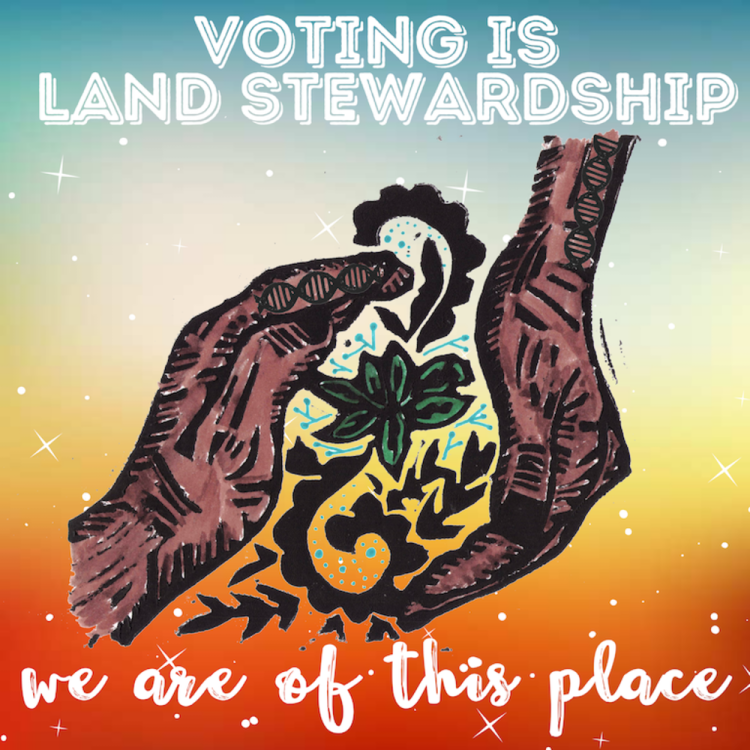 Exercising the right to vote for Native Americans can unfortunately be difficult. Budget cuts and concerns about voter fraud have generally made voting in-person more difficult in most states. This year, voting is likely to be especially difficult as states have responded to the COVID-19 pandemic by closing polling places and making cuts to a number of public services. In addition, because of the polarized nature of this election, there is also an increased possibility of voter intimidation outside of polling places.

Voters in Indian Country face physical barriers to voting, such as long distances to polling places, limited mail/post office access for voting by mail, address and ID requirements that can be difficult to get in rural areas, and documented racism at polling places both on and off-reservation. Voters also face centuries of discrimination, disenfranchisement, and exclusion that discourages voting.

One website can’t fix all of these issues, but the idea with Natives Vote is to (1) empower Indigenous Peoples by providing in-depth information about how to register to vote and vote, (2) engage people by connecting them with Indigenous artists and other voters, and (3) highlight the importance of this election and Indigenous Peoples using their voices.

What was First Peoples’ role in the project?

The site, and our work this fall, is in part informed by my experience and the experience of First Peoples Worldwide and AILC students working on voting rights issues in North Dakota during the 2018 election. We saw firsthand how state laws and polling places with hostile poll workers can disenfranchise and discourage Native American voters. It is also informed by the research of the AILC students who have been working on this project since January, who discovered a lack of comprehensive voting information for Native voters.

Our role in Natives Vote was to provide voting information for every state, monitor and update this information throughout the election period, and curate specific election content and information for the site, for the organizers on the ground we’ve partnered with, and for media. Putting it mildly, this was an enormous undertaking for just a few people. Just as there is no singular Indigenous experience in the United States, there is no single answer for how voting works. Voting rules are generally set by the states, so a relatively simple question like “How do I find my polling place” has 51 different answers.

Thanks to the hard work of the AILC students, we were able to find answers to 42 questions about the voting process for each state and D.C. Our work was especially difficult because a key focus of our research was to provide answers to questions that are almost never included in voter information, but are extremely important to Native voters (Can I vote with Tribal ID? What kind of address do I need to register to vote? How can I get a residential address that will allow me to vote? Will my polling place provide voting materials in a Native American or Alaskan Native language?). This information then formed the backbone of the Natives Vote site, which also includes a voter registration tool, an Election FAQ and a Know Your Rights tool. The site also hosts a large cache of incredible work by Indigenous artists.

What has been really gratifying to see is that folks have been connecting with the site and connecting with the Natives Vote project more broadly. Our partners IllumiNative and Native Organizers Alliance have been holding virtual town halls that have up to 100,000 views, and have used the information we have to reach and educate potential voters. Speaking personally, this election period has been extremely stressful, and it is gratifying to see the work that we’ve done inform potential voters.

What are some actions Native people and allies for the rights of Indigenous Peoples can take towards voter enfranchisement and civic engagement?

More generally, how does civic engagement intersect with social justice in advocacy for Indigenous rights? After the election, what will you be working on?

Obviously, voting is not and cannot be the solution to every problem. We cannot pretend that voting in a few elections can undo centuries of violence, theft, and discrimination against Indigenous Peoples. Nor can voting every two or four years fully address the disproportionate unemployment, health issues, and lack of opportunities that Indigenous People experience. However, civic engagement is central to many goals in modern human rights and Indigenous rights work, and voting is an important tool in actualizing the goals of Indigenous Peoples. Our hope with this project is to provide a platform that encourages all Indigenous voters to exercise their rights.

After the election, I’m looking forward to joining on to some of the other amazing projects that First Peoples is currently working on. So much of First Peoples’ work is already focused on fighting discrimination against Indigenous Peoples, providing opportunities for Indigenous Peoples, and elevating Indigenous voices and perspectives. I’m happy to be able to do what I can to work to achieve these goals in the United States and globally. 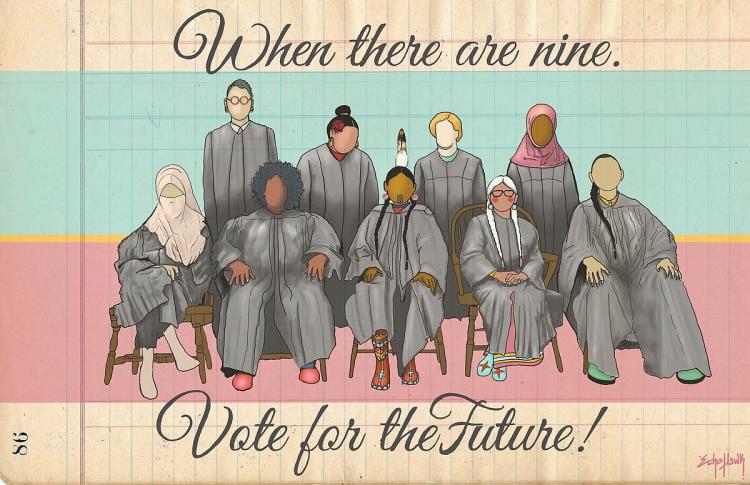