In 2000, Native women experienced sexual assault at a rate seven times higher than white women and there is no indication that this disparity has narrowed in the past nineteen years.[1] Since the Bakken oil boom, Native American communities have reported increased rates of human trafficking, specifically sex trafficking, and missing and murdered indigenous women in their communities. Native communities, service providers, media and policy-makers alike have attributed this increase to the large increase of well-paid oil and gas workers who flocked to the region, setting up man camps in largely rural areas with little infrastructure to support such a population boom, however temporary.

In January of 2017, First Peoples Worldwide Faculty Director Carla Fredericks and Staff Attorney Kate Finn authored Responsible Resource Development and Prevention of Sex Trafficking: Safeguarding Native Women and Children on the Fort Berthold Reservation, which was published in the Harvard Journal of Law and Gender.[2] That paper detailed how the state of federal Indian law and increased extractive activities have compounded the risk of violence toward Native American women and children.[3] The next year, the same authors published a strategic plan to address these issues which noted the lack of empirical data on this issue and called for the development of accessible statistics around the impact of resource development on local and tribal criminal justice departments.[4]

In response to the concerns raised by tribes and individuals, the Bureau of Justice Statistics sponsored a report to investigate whether the reports of increased violence in the region were statistically verifiable. On February 14th 2019, the National Crime Statistics Exchange (NCSX) released a comprehensive report titled, Violent Victimization Known to Law Enforcement in the Bakken Oil-Producing Region of Montana and North Dakota, 2006-2012.[5] The report uses local data collected by the FBI and concludes that the reports of increased violence in the Bakken region indeed coincided with the oil production boom beginning in 2008.[6] 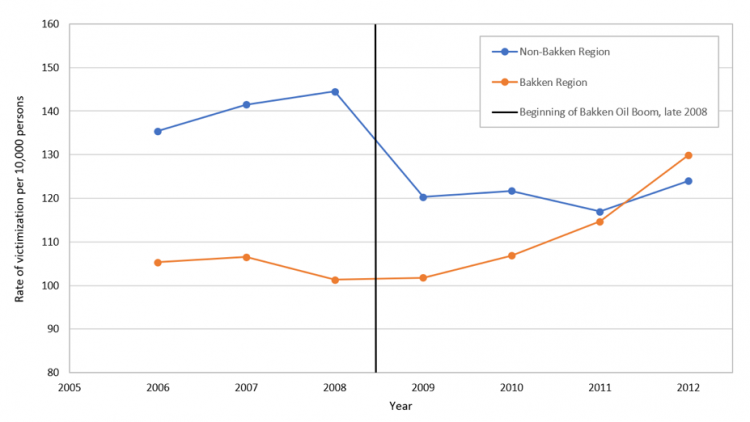 The Fort Berthold Reservation lies at the center of the Bakken Formation and counties on the reservation increased in population by thirty to seventy percent between 2006 and 2012.[10]  Furthermore, McKenzie County (which makes up the northwest corner of the reservation) is known as the epicenter of the Bakken oil boom,[11] so the area was included in the NCSX report’s analysis. While the report does not exclusively focus on rates of violence perpetrated against Native American women and children, it found that the violent victimization of Native Americans in the Bakken region was approximately 2.5 times higher than the corresponding rate for whites. The increase in crime rate for all populations then translated into a strain on the resources and infrastructure of the rural infrastructure to meet the needs of all victims. Those Native American victims seeking culturally resources and healing within their own cultural and community context also faced barriers simple due to strain on the resources.

This report takes a step in the right direction, however continued analysis and reporting is necessary to address the corollary epidemics of human trafficking and missing and murdered indigenous women and children. As stated in the original paper, compiling data on these sensitive crimes is imperative to better understand the causes and consequences of these heinous crimes, but also to channel resources into services that provide for the long-term health and wellbeing of the entire community.

Further, where the increased crime rates are directly related to the oil boom, First Peoples Wordwide recommends compiling as well as disaggregating this data as a critical means to disclose to investors the true economic, social and cultural impacts of investment in the fossil fuel industry. First Peoples Worldwide continues to call for disaggregated data on these issues and works to elevate local efforts to ensure safety, prevent violence, and provide increased economic opportunities for Native women and youth.