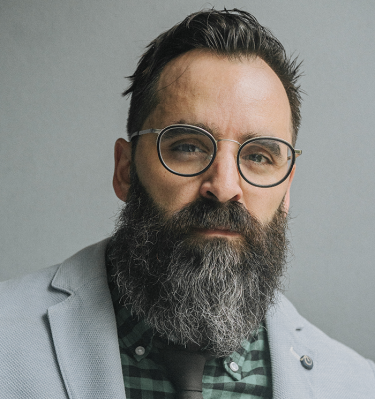 Dr. Jorge Perez-Gallego is a multifaceted astronomer, designer and educator with a Ph.D. in astronomy and an M.F.A. in design.

His interdisciplinary background has allowed him to teach graduate and undergraduate courses on subjects as diverse as astronomy, graphic design and interactive media at institutions such as the University of Florida and the University of Miami.

As an astronomer, his main area of research is galaxy formation and evolution over cosmological timescales. In particular, he has looked at the structure, kinematics and stellar populations of galaxies both in the nearby and in the distant universe. The comparative analysis of these populations allows us to describe how galaxies have evolved in the last 12 billion years.

As an educator, he looks at computer simulations as a way to engage, excite, and generate interest in science. He is co-PI of an NSF-funded project that leverages Minecraft as an informal learning environment for young learners to interactively explore the scientific consequences of alternative versions of Earth via “what if?” questions, such as “What if the Earth had no moon?” or “What if the Earth were twice its current size?”

As an artist, he is interested in building bridges between the sciences and the arts to facilitate the understanding of the world within and around us.

Science museums often seem the perfect scenario to look at the productive romance between art and science as two complementary ways of thinking, which is what brought him to become, for the past several years, a pivotal member of the opening team at the Phillip and Patricia Frost Museum of Science—which opened in May of 2017 in Miami, FL and welcomed over 900,000 guests during its first year. Among other projects, he led the curatorial and creative efforts during the development of the cutting-edge 67-foot Frost Planetarium; and the permanent Feathers to the Stars exhibition, about the past, present and future of flight. And, co-led the temporary LASERsHOW installation, part science demonstration, part soundscape, sculpture and laser show; and the LATE@Frost Science event series for a more sophisticated museum audience with an interest in science and art.

His work has been published in international science and art journals and conferences. He has worked for the NASA Florida Space Grant Consortium and Telefónica, has co-founded an award winning design studio and has been featured in both radio and television.