The March Was Just the Beginning 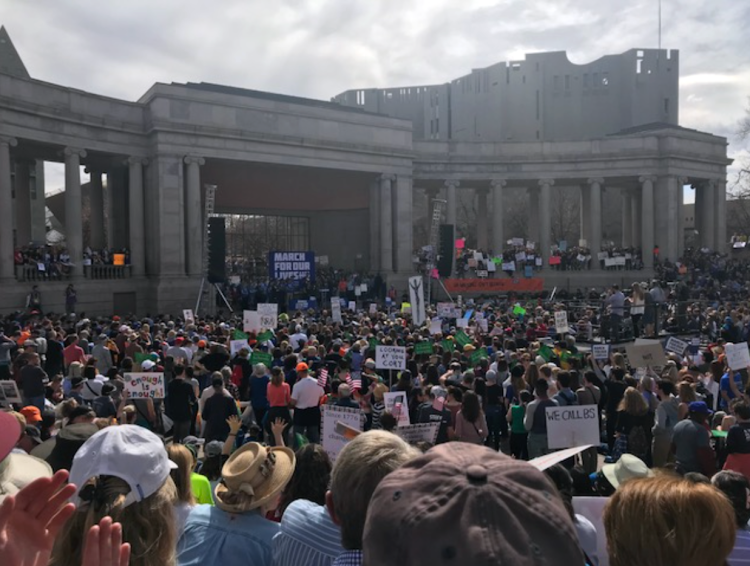 Today is the 19th anniversary of the shooting at Columbine High School.

On this day of remembering, a national school walkout unfolds, led by youth who are passionately advocating for reforms to gun laws. We sat down with a current INVST student, Olivia Gardner who is in her first year of INVST training. Olivia was an organizer of the March 24, 2018 March for Our Lives Colorado.

INVST: How did you get involved in organizing against gun violence?

Olivia: There was a message sent out on FaceBook about students getting together exactly a month before the March for Our Lives. In the first meeting we had, we created a board called Never Again 5280. We held an election online, across the state of Colorado. I was elected as secretary.

INVST: Leading up to the march, how did you get the word out? How did you coordinate different schools across Colorado? How did you know how to include the voices of different youth? Olivia: There are seven different congressional districts across Colorado, so we had seven different representatives for each of the districts, plus a high school coordinator and a college coordinator. So we all took on the area of Colorado that we were in. It’s kind of like a big web of connection, letting each other know -- a lot of social media interaction.

Olivia: Everytown Organization is a non-profit that focuses on gun safety, and they were the ones who helped with every march. They are that national voice. They were a guiding source for how the day would roll out. But most of it was the students just doing the research, coming up with talking points, and finding resources. For example, Jessica, our Director for Political Affairs needed help finding different definitions of what an assault weapon is, which was actually hard to find research on. INVST: As Secretary, what was the role you played on the day of March for Our Lives Colorado?

Olivia: On the march day, I was the site manager. I made sure the press riser was where it needed to be, as well as the March for Our Lives banner on the stage. We had volunteers from Moms in Action and Students in Action, and students from across Colorado helped in any way they could, putting trash cans at Civic Center Park so that we didn’t leave the park a mess, and so much more. The day of the march I made sure everything was organized and where it needed to be.

INVST: And at March for Our Lives Colorado, what was the message that you hoped would make the local press? What did you want the news to look like, that night or the next morning?

Olivia: That the march was just the beginning. It was kind of like the momentum in this whole movement. It was just the first step. Now, it’s about actual legislative action and change.

INVST: How did you walk that line between sadness and poignant reflection and grief, and also, launching something? How did your event generate momentum? Did you and your colleagues have any discussions about that?

Olivia: With my colleagues, we had a lot of discussions. Leading up to it, right before the march, when everything was in place, that’s when we started really getting focused, and there was a lot of conversation. But even on stage, most of us were in tears.

INVST: For anyone who wasn’t there, what was the mood like?

Olivia: It was an uplifting mood, but at the same time it was melancholy. It was a reflection of how much we have let this continue on. With our speakers, we had Connie Sanders who lost her dad at Columbine, and we had Tom Mauser [father of slain Columbine student Daniel Mauser] and then we had Aurora Theatre shooting survivors, who talked about how their best friends were killed in the shooting. Colorado is the launch pad of shootings within the nation, which is really disgusting.

INVST: So what’s next?

Olivia: We had a Town Hall on Saturday, April 7th at a high school. We invited all Colorado representatives. It was a discussion to see where they stand. We also invited victims to come and talk, so I facilitated a panel with Connie Sanders and Tom Mauser, who talked about what they want to see. We are organizing another event on May 19th, a Gubernatorial Debate from 6-8 pm at Manual High School. We are also collaborating with the Rocky Mountain Peace and Justice Center. It will be a Candidates Forum on gun violence that is yet to be scheduled. Youth leaders will be the moderators and the ones who ask the questions.

INVST: There’s a lot of attention on everything that’s happened since the March for Our Lives.  I saw that Marjory Stoneman Douglas High School students [in Florida] are now required to wear see-through backpacks to school. Students including, but not limited to March for Our Lives movement leader Emma Gonzales, are saying, “You are making a lot of changes, but not the right changes.” How do legislators make sure their eyes are on the prize? How do they pass the right changes?

Olivia: It’s about remembering and keeping the focus. We want to make sure that the people we have in office are actually working for their constituents -- working for the people who actually voted them into office. The march was just the beginning. Now we are working for legislative action and change.

Olivia Gardner is a first-year INVST student and a Sophomore at the University of Colorado Boulder. Her community organizing was featured in March 24th's Washington Post article by Donna Bryson titled In Denver, staving off a sense of hopelessness by lobbying for change.

Follow INVST in all the social places to stay connected with inspiring stories of hope and change: