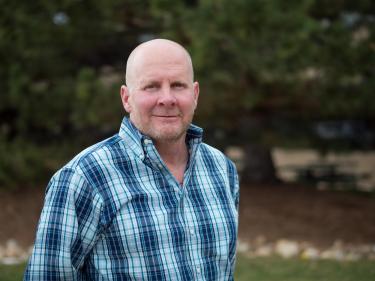 Dr. Hutchison received his Ph.D. from Oklahoma State University in 1995, completed post-doctoral training at Brown University in 1998, and joined the faculty at the University of Colorado Boulder. Early in his career at the University of Colorado, he developed parallel lines of research on alcohol and tobacco use with NIH funding. From there, he expanded in interdisciplinary directions by incorporating genetics and neuroimaging to better understand individual differences in risk as well as mechanisms in the brain that underlie behavior change. As part of that evolution, he moved his program of research from the University of Colorado to the Mind Research Network and University of New Mexico (UNM) in 2007. At the time, CU did not have a magnetic resonance (MR) scanner and MRN offered scanning resources and a cutting-edge genetics program. Shortly after arriving, Dr. Hutchison was promoted to the leadership team as Chief Science Officer (CSO). At the time, MRN was receiving about $10 million a year from the federal government to support operating costs, in addition to research grants from NIH and the DoD. In 2010, there was a change in leadership and a unique opportunity that prompted Dr. Hutchison to return to CU.

In 2012, Colorado legalized recreational cannabis and it became clear that the public health implications of changes in cannabis laws and policies represented a huge and untouched area of research. To facilitate this work, Dr. Hutchison invested a great deal of time and effort into finding ways to push research forward despite complex regulatory issues. These efforts led to an NIH R01 grant from NIDA to study the effects of cannabis products on health outcomes in 2015 and an expansive program of research to study the health effects of cannabis products (e.g., flower, edibles, concentrates) purchased in the state of Colorado. In 2018, Dr. Hutchison founded the CU Center for Research and Education About Cannabis and Health (CU REACH). Dr. Hutchison received the prestigious Distinguished Research Lecture Award at the University of Colorado in 2021.

In terms of his current research, Dr. Hutchison has integrated his interests in alcohol and cannabis research, neuroimaging, and blood-based biomarkers under one conceptual framework that emphasizes the cannabinoids, endocannabinoids, inflammation, and the brain. For example, one of recent grants tested the effects of a mindfulness-based intervention among individuals with alcohol use disorder (AUD). Specifically, the research is testing the effects of alcohol consumption and mindfulness on dysbiosis in the gut microbiome, blood markers of intestinal permeability, blood markers of inflammation (cytokines), gray matter volume and thickness and white matter integrity in the brain, a blood biomarker that tracks axonal degradation (neurofilament light), behavior, mood, and cognition. He is also the principal investigator (or co-investigator) on a number of NIH grants that examine the effects of cannabis products (e.g., flower, edibles, concentrates) purchased in the state of Colorado. Specifically, the studies are designed to compare the effects of CBD only products, THC combined with CBD, or THC only on cognitive outcomes, anxiety, and pain using mobile pharmacology lab. This research focuses on a number of patient populations, including pain patients, individuals who want to stop using opiates, individuals with alcohol use disorder, veterans, and the elderly. The mobile lab allows for the assessment of blood levels of THC and CBD and a test of whether blood levels of these cannabinoids predict the effects of cannabis on key outcomes (e.g., reductions in pain and opiate use). This research includes both observational designs as well as randomize clinical trials with an FDA IND. Most recently, he has been focused on cannabinoids, endocannabinoids, inflammation, and risk for Alzheimer’s disease. The age demographic that is increasing their cannabis use the fastest are those over the age of 65, so these questions are timely and highly relevant from a public health perspective.