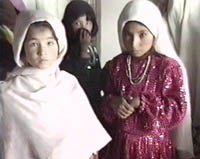 [2] The 1 1/2 million Hazaras, Shi’ites in a Sunni country, Mongols among Indo-European tribes like the Pushtuns who make up 99% of Taleban’s core membership, were the last bastion of women’s rights in the country. Among the Hazaras you found women officials, teachers, doctors, medics, even soldiers; totally unlike life for women in Taleban-ruled territory. U.S. support for the Hazaras: nil.

[4] I visited the Hazara heartland in central Afghanistan twice this year, both times with relief missions. Farmers’ wives were attending makeshift schools in caves and mosques.

[5] At Bamiyan University, young men and women students unveiled a banner to welcome our medical relief team: “WE ARE WARMLY WELCOMING OUR RESPECTABLE AMERICAN GUESTS IN HAZARASTAN.” In a women’s school in a village mosque, the class smiled proudly as one student wrote in Persian on the blackboard, “Knowledge is the salvation of all nations.” She wrote with a crumbling white stone; most Hazara schools were too poor to afford chalk. 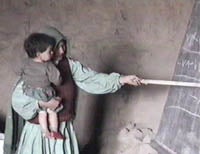 [8] Even worse, the United States lent and continues to lend its tacit blessing to the Taleban by doing nothing to stop them. In fact, American oil giant UNOCAL, closely tied to Saudi Arabia’s Delta Oil, was hosting Taleban delegates to the U.S. and praising them in Washington at the same time the Taleban were murdering and terrorizing women in Afghanistan. And at the same time Osama bin Laden, who bombed our embassies in Africa, was living as a welcome guest of the Taleban and helping finance their takeover of Afghanistan– a bit of incidental irony. 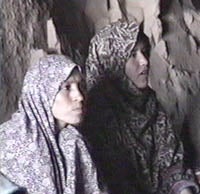 [10] Now, with the capture of the Hazarajat by Taleban, even more Afghans are dying. At least one male Afghan U.N. worker has reportedly been murdered; not coincidentally, he was working with an agency that focused on women’s welfare and rights. There are reports that hundreds of Hazara civilians have been arrested and killed as well. 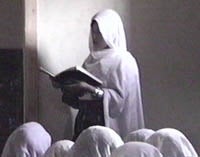 [11] Consider carefully the Department of State’s instructions to its spokespeople regarding Taleban war crimes in Bamiyan, the Hazarajat heartland: “IF ASKED ABOUT WAR CRIMES: WE ARE AWARE OF CLAIMS THAT THE TALIBAN HAVE KILLED CIVILIANS DURING THE CAPTURE OF BAMIYAN. AT THIS POINT, WE DO NOT HAVE ANY INFORMATION THAT COULD PROVE OR DISPROVE THESE REPORTS.” In the journalism business, we call this stonewalling last time I checked. It’s a Brave New World in Foggy Bottom, no doubt about it. 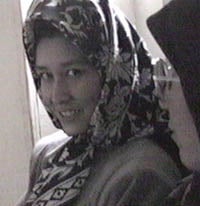 [12] I think of the women I met in the Hazarajat: the hardworking teachers and medics, afire with idealism; the women leaders who told me proudly of how they celebrated the International Day of the Woman this March with a parade through Bamiyan; the writers who were preparing to put out a women’s literary magazine, of poetry, stories, essays. Well, kiss it all goodby. It’s all dead now, drowned in innocent blood and dirty oil.

[13] According to reports from Hazara refugees coming from Afghanistan, the Taleban have carried out widespread atrocities and massacres since they took over the Bamiyan Valley late this summer. There is no firm news about the fate of the various Hazara women’s educational, medical and political groups in Bamiyan, but the Taliban continue to refuse to allow human rights observers into the country, and in the northern city of Mazar-i-Sharif they have committed literally thousands of murders and rapes of the city’s Hazara civilians. No one in the U.S. government is doing anything to save the Hazaras or Afghan women in general.

[14] Unocal has pulled out of the pipeline deal for now, but recently American mineral/mining exploration executives visited Taleban in Kabul looking for deals.