The number of University of Colorado Boulder students studying abroad is increasing at a rate that outpaces the national average, according to a new report from the Institute for International Education.

CU Boulder ranks fifth nationally for universities sending students on semester-long study programs, according to the report, and ranks 26th for the total number of students earning academic credit abroad.

“Dante describes hell as a city, and he makes references to specific architectural structures or generic structures, so it really enriches it for students who maybe have never traveled outside of the U.S.,” she said. “Having that chance to see what Dante is talking about up close, to climb the towers he mentions, it adds so much to the poem.”

It’s a tiring three weeks for Magnanini, but in a good way, because students are so engaged and making so many connections they’re constantly asking questions.

Experiences like the Global Seminars give students a chance to study abroad who can’t fit the traditional semester or year model into their education, Magnanini said.

“We have students who are athletes, who work all summer, who have family obligations, and I think these are great because they provide another option for students, and they allow everyone the possibility to try their hand at study abroad,” she said. 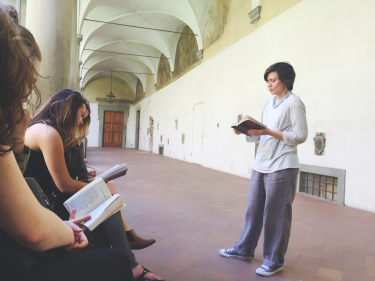