'Take things outside your comfort zone' 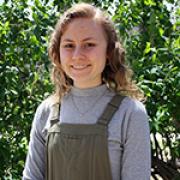 Shelby Eidel, from Maryland, is majoring in integrative physiology and French.

While Eidel has always known that she wanted to go into science, which she loves, she began taking French in middle school. She worried that if she didn’t keep studying French, she’d lose it. She started off minoring in French but then realized she was only 12 credits away from getting a second major.

“I really wanted to maintain that fluency so I could use it in jobs in the future,” Eidel said. “And I would love to do health-care work overseas, so if (French) could help at all, then I'd like to have that kind of skill.”

In the fall, Eidel is going to Johns Hopkins University for a master's in public health and human nutrition. She wants to be a registered dietitian, which involves 1,200 hours of internship work.

Later she hopes to do clinical work, perhaps in a hospital. “I'm potentially looking at cancer patients or diabetes patients.”

Eidel’s advice to other students: “I would say take classes that you've never heard of before, that you didn't explore in high school; that you just have no idea (about). … That's what I did with my nutrition class.”

“Definitely take things outside of your comfort zone. But then also, don't be afraid to add a major or minor because you can always drop it if it becomes too much. At least you have those classes under your belt.”